When I lived in London, I struggled to keep up with the locals' unwavering passion for the pub: Pub lunches (with a pint). “A quick one” after work. Sunday afternoon sessions that turned into Sunday nights, then nipping into the local for a nightcap on the way home. It was exhausting.

The pub is as much a part of London life as urban foxes and complaining about the Tube. I say, if you're going to spend so much time inside one, it might as well be somewhere beautiful and interesting. Visit one of London's many historic pubs and you're following in the footsteps of centuries of brawlers, debaters, carousers and love-makers – many of them notable figures in their own right. 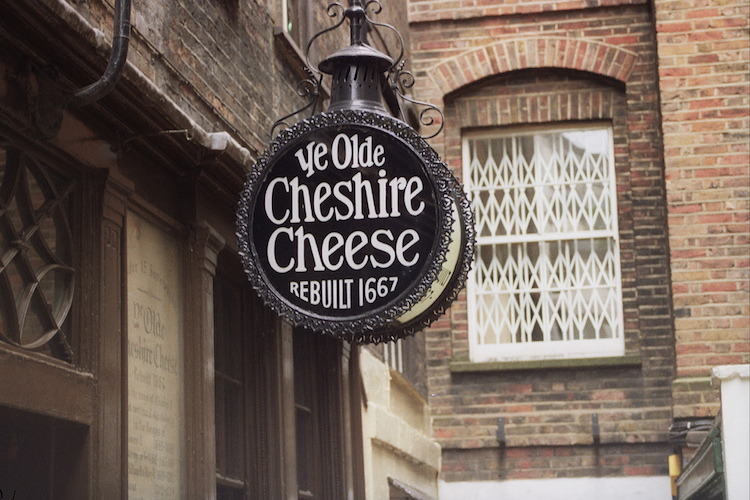 If you've heard of one London pub, it's probably the Cheshire Cheese. This is possibly London's most famous hostelry, which means its tiny connected rooms and cosy “snugs” are often overrun by tourists. If you go – and you should – try to plan your visit for early in the week, and in the evening: the place gets very little natural light, so you might as well go at night. The original pub on this site was built in the 1530s but destroyed in the Great Fire of London in 1666. After going through that horror, Londoners obviously needed a stiff drink, and fast – the current building opened the next year, one of the very first buildings to be reconstructed following the fire.

This Dean St bar has been a centre of French life in London for more than a century. Members of the French resistance met here during WWII and General Charles de Gaulle reputedly wrote his famous speech rallying the French people, "À tous les Français", in the upstairs bar. Regulars including artists and writers like Lucien Freud, Francis Bacon, Brendan Behan and Dylan Thomas, part of a legendary Soho drinking society which also frequented The Colony Room and The Coach & Horses nearby.

Today you won't hear many French accents but the place retains a strong Gallic character: beers are only available in half-measures and civilised behaviour is encouraged through the famous “no music, no machines, no television and no mobile phones” rule.

The Lamb served its first customer in 1729 but the original Georgian fixtures are long gone. In their place is an incredibly well-preserved Victorian pub interior, including some of the last surviving “snob screens” in London. These were hinged plates of etched glass that the well-to-do would open to talk to the barman, then quickly snap shut to avoid looking at the public-bar plebes on the other side. Sepia photos of music hall players line the wall and in the corner there's a polyphon, a 19th Century precursor to the gramophone, which you can still play for the price of a gold-coin charity donation.

Inveterate public house-habitué Charles Dickens was a fan (granted, he lived just down the road), as were members of the literary Bloomsbury Group, including Virginia Woolf, E.M. Forster and Lytton Strachey.

It's far from the oldest bar in London – in fact, at only 125 years, it's a relative pipsqueak – but Gordon's Wine Bar, down a flight of stars next to Charing Cross Station, is surely one of the most atmospheric. It's housed inside the vaulted cellars of a row of long-demolished Georgian townhouses, one of which was once owned by the diarist Samuel Pepys, and it's illuminated almost entirely by candlelight. In fact, it's so dark down there it can be hard to see the drinkers at other tables – making it just the place for an illicit romantic assignation.

There's no beer on offer, but they do a huge range of wines and ports. To eat, there are surprisingly generous cheese plates, with bread, pickles and onion jam, and excellent pork pies, Scotch eggs and paté. 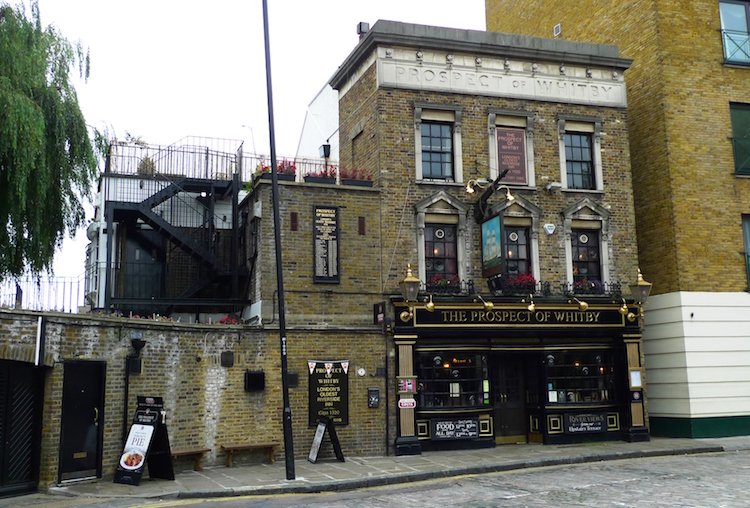 The Prospect of Whitby, Wapping

There aren't many pubs where you can look out the window and see a hangman's noose swinging in the breeze. The Prospect of Whitby in East London is one. The noose commemorates “Hanging” Judge Jeffreys, a notoriously bloodthirsty judge who sentenced hundreds to death following the failed Monmouth Rebellion of 1685. None of those men were actually executed here but the pub likes to play on its association with Jeffreys, who was a regular. Before it was the Prospect, it was known as the Devil's Tavern, a hideout for pirates, smugglers and mutineers, many of whom met their end at Execution Dock a few hundred metres to the west.

Unlike many “riverside” pubs, the Prospect of Whitby is right on the water, and its outside terrace is a great place to watch boats, barges – and the odd super yacht – navigate this stretch of the Thames.