5 highlights of a walking tour of historic Downtown LA

It's a little-known fact that Los Angeles' central district boasts one of the highest concentrations of historic buildings in the entire United States. The best way to see them? On one of the regular tours led by historic preservation society the Los Angeles Conservancy.

It’s Saturday morning in Downtown Los Angeles. The city’s still rubbing the sleep from its eyes, while I’m rifling through my suitcase for a pair of sensible sneakers with one hand and grasping a cortado from the Stumptown coffee counter downstairs in the other. 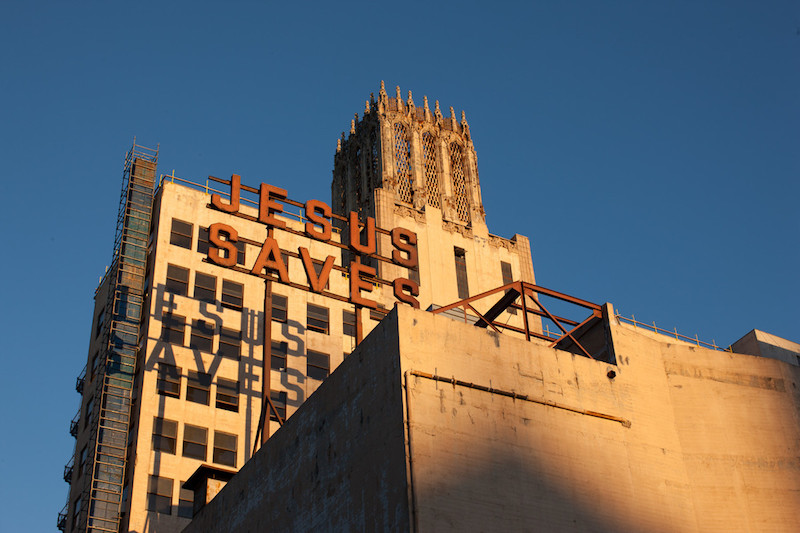 The famous exterior of the Ace Hotel, Los Angeles. The neon sign is a remnant of the building's previous life as an evangelical church. Photo: supplied

Sneakers on, I’m finally out the door of the Ace Hotel on South Broadway at pace, which is to say, a bit faster than a walk and a lot slower than a full-blown run. My mission: to make it to Pershing Square – Los Angeles’ first-ever public park founded in 1781 – in time to join a two-and-a-half hour walking tour with the Los Angeles Conservancy starting at 10am. 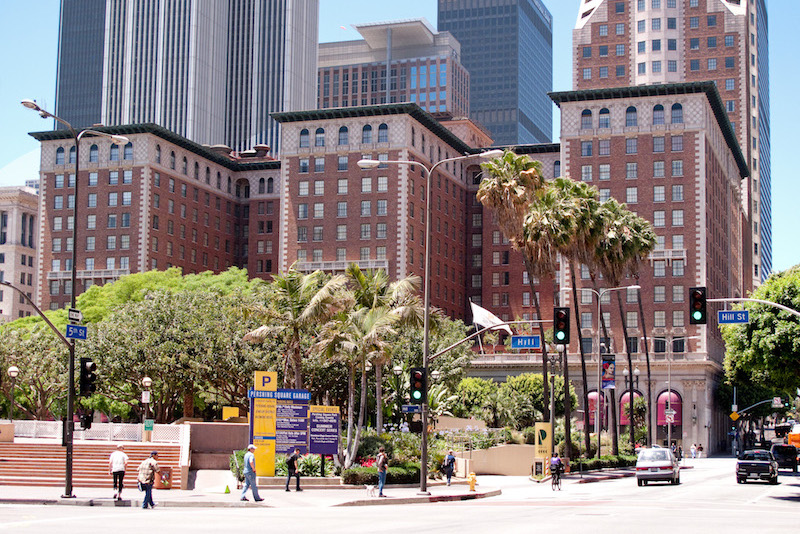 I make it through the Jewelry District and into the park from Hill Street red-faced but on time and thankfully blister-free.

I hand over my $15 to Steve, our volunteer guide, and take a minute to observe the sprawling park that started life as native land and later became a public space that’s seemingly loved and loathed in equal measure.

On the plus side, explains Steve, it’s in the perfect location for an urban park. “It’s right in the heart of Downtown Los Angeles. You’ve got the elegant frontage of the Biltmore Hotel,” he says, gesturing across the road at the grand Beaux-Arts hotel built in 1923 and the original venue for the Academy Awards.

“You’ve got Bunker Hill’s galleries and offices nearby. It’s close to the lofts and eateries that everyone’s flocking to. It’s clean and there’s plenty of trees and grass. Yet a lot of people really don’t like it.” 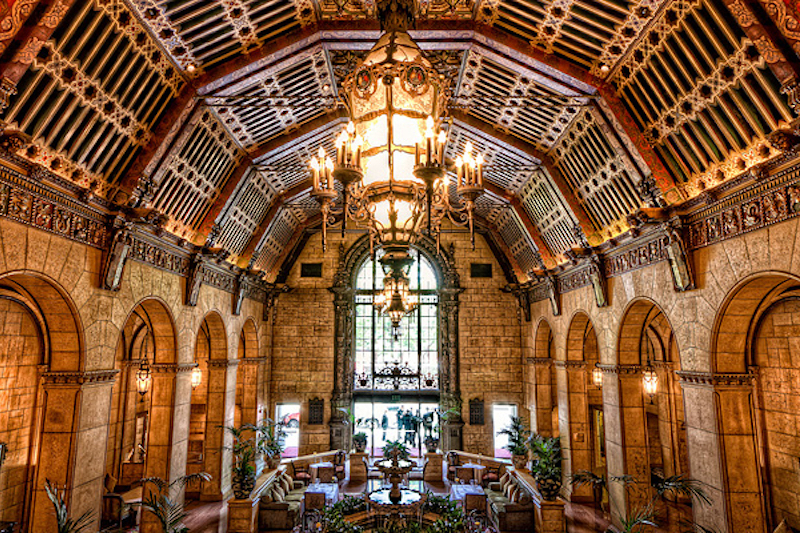 By now our tour group of eight has convened and is gathered in a semi-circle around Steve. We are Kiwis, Aussies and Americans and we’re listening intently while visually processing the details around us.

What we see, for the most part, is Los Angeles’ original downtown precinct undergoing an uber-chic revival. Its historic buildings are being remade into cool office spaces and funky apartments; cafes, restaurants and roof top bars are sprouting up like weeds.

Urbane Angelenos are coming to live here in their droves, while the number of tourists coming to Downtown in search of ‘undiscovered LA’ is sky rocketing.

Downtown Los Angeles – once considered the exclusive domain of druggies and deadbeats – is buzzing.

“It’s the ongoing renaissance of downtown that’s prompted city planners to rethink Pershing Square – it’s likely a lot of what’s here now will go,” explains Steve as we leave the park for South Olive Street. “So, take it in. It might look very different next time you visit.” 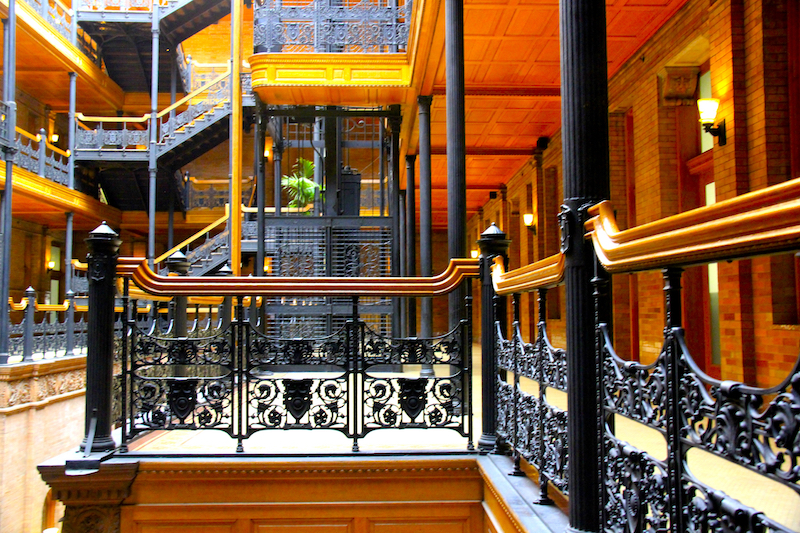 The interior of the Bradbury Building on Broadway, built in 1893 and still open to the public. Photo: Creative Commons

On today's tour we’re walking the 12-block area known as historic downtown. Leaving Pershing Square’s chintzy aesthetic behind us, we trail past some of Los Angeles’ original landmarks, stopping to gawp at the stately architectural details of the early 1900s, when many of these buildings were erected.

We stop once more outside the luxurious, 11-storey Biltmore Hotel, once “the largest hotel west of Chicago” and a location for movies as varied as A Star is Born, Bachelor Party and Spider-Man. From there, we make our way to the Los Angeles Central Library, an Art Deco beauty built in 1926.

“The city came very close to losing this building to demolition in the '70s,” Steve tells us. “In other parts of the country historic buildings were being torn down in favour of new development. Not Downtown. Instead, the historic core was simply abandoned and forgotten about until the 1990s when the renaissance you see today began.” 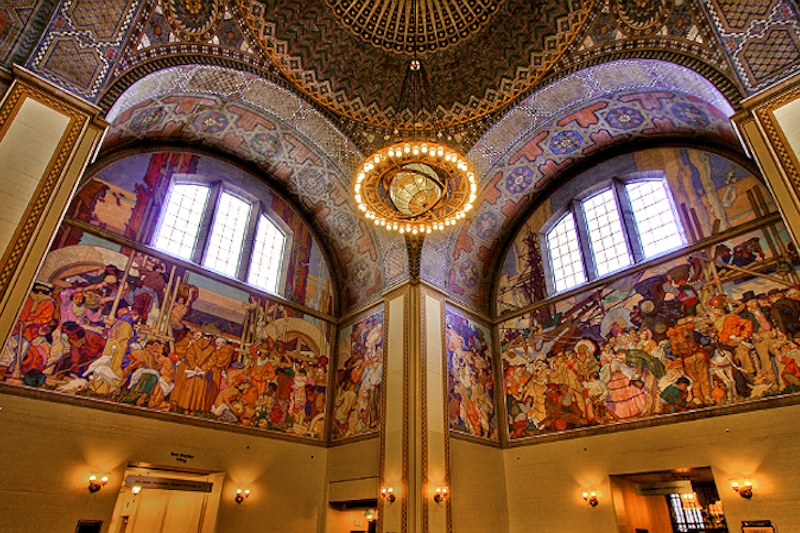 Walking inside the library today, it’s easy to see what a treasure this building is. The richly-detailed ceilings of the rotunda by decorative painter and muralist Julian Garnsey are enough to keep you gazing upwards – ignoring your stiffening neck – for hours.

I’m sorry to leave when Steve calls time. But my tummy’s rumbling and thankfully we’re only a couple of blocks from our final stop, Grand Central Market. To get to the 100-year-old market, we whizz by the former Edison Company and Parkinson & Parkinson buildings, two Art Deco monuments built in the 1930s.

And we check out Angels Flight, a pair of sweet wee railway trams, dubbed Sinai and Olivet, that haul you 100 metres up a steep hill to Downtown’s contemporary art museum, the Broad.

Of course you can walk the 153 stairs instead. But for the $1 one-way fare and the chance to sit in the same spot as La La Land lovebirds Ryan Gosling and Emma Stone, why would you? 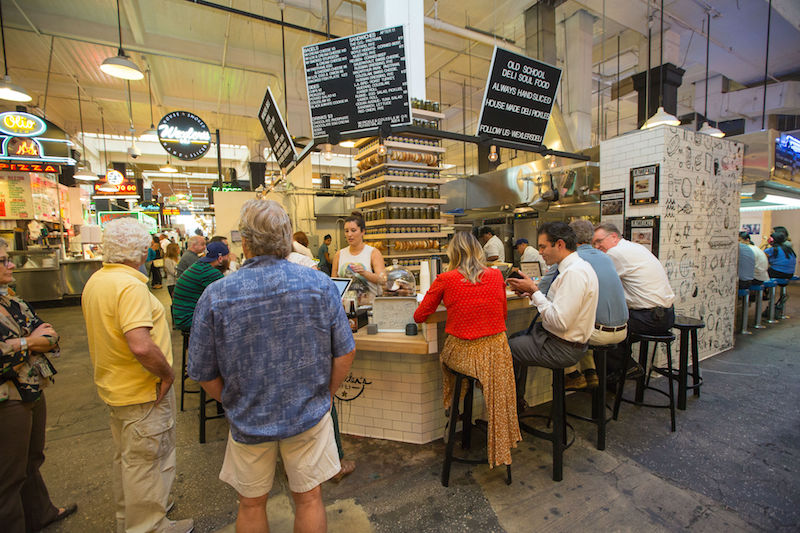 You can’t come to Downtown Los Angeles without visiting Grand Central Market, Steve tells us as we wander into the ground floor of the Homer Laughlin Building.

Packed with nearly 100 vendors, it’s as popular now as it was when it first opened its doors back in 1917. In those days you were likely to sate your appetite with a crisp apple (this was then primarily a produce market) or dig into a root beer float (what we call in New Zealand call a spider).

Nowadays you can wrap your lips around a ginormous gordita, a sandwich stuffed with your choice of meat, plus beans, guacamole and salad, from Ana Maria's Mexican food stand. Or maybe a German Superbowl, a hearty pile of spuds, onions, sauerkraut, sausage and a sunnyside egg, all washed down with a strong wheat beer from Berlin Currywurst.

You might even treat yourself to a cone of sea salt cream and cookies ice cream from McConnell’s ice cream stand. And why not? After all the kms you’ve clocked up since breakfast, you deserve it.

Jacqui Gibson is a Wellington-based freelance travel writer and photographer.