As a holiday destination, Honolulu has so much going for it: great shopping (with one of the lowest sales-tax rates in the United States), excellent restaurants and bars, and, at the centre of it all, the gigantic crescent of white sand, warm water and beautiful bodies known as Waikiki.

But what Honolulu doesn't specialise in is peace and quiet, which is why a day trip to Kailua makes so much sense. A quick 30-minute drive from the city, Kailua is the laid-back younger sibling to Honolulu's brash and confident adult. Come to Kailua for a change of pace – and to experience two of Hawaii's best beaches, right on your doorstep. 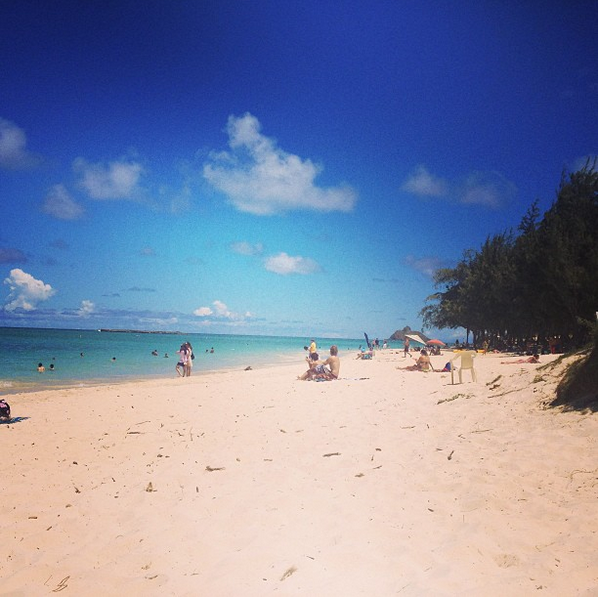 You have two options. Go the long way, following the road around Oahu's southern tip, and you'll pass both snorkelling-and-scuba diving mecca Hanauma Bay and Waimanalo Beach, currently the best beach in America (at least according to online sun-and-sand expert Dr Beach).

No car? No problem. Hawaii's brilliant bus network, TheBus, will get you there for the princely sum of $2.50USD. You'll need to take a second bus (no. 70, free with a bus transfer) from town to Kailua Beach Park, but as the service runs only every 60 to 90 minutes you might be better walking instead.

Your last stop before arriving at the beach should be Kalapawai Market, a deli and general store that's been serving Kailua beachgoers since 1932. Grab a Kona coffee, a breakfast burrito and a copy of the Honolulu Star-Advertiser to read on the beach. You're set.

The first time I saw Kailua Beach, I was floored. It's almost laughably perfect, a great swoosh of crystalline sand lined with swaying palm trees. Beyond the sand, the cerulean water is bathtub-warm and barely rippling. No commercial activity is allowed in the park, which means no noisy water-sports, no pestering soft-drink vendors and no tour buses discharging tourists straight onto the beach. The only sounds are of lapping waves, children's happy shrieks and the burble of a distant radio – a lot like an idyllic New Zealand beach, in fact.

Lanikai Beach with the Mokulua Islands in the distance. Credit: David Chatsuthiphan/UnrealHawaii.com.

Lanikai (“heavenly sea”) is Kailua's yet more serene southern neighbour. It's a public beach but it's not part of a state park, so you won't find restrooms or lifeguards here. Be aware, too, that there's no public parking close by. But if you're prepared to walk, it's so worth it.

Like Kailua, Lanikai is a former Best Beach in America. It's not hard to see why. The sand seems even whiter and more powdery than at Kailua, the water even bluer. And, thanks to that lack of easy access, there are even fewer tourists to share the beach with.

Just over a kilometre from the shore are the Mokuluas, a pair of tiny uninhabited islands commonly known as The Mokes. Both are an easy paddle by kayak – you can rent one from Kailua Sailboards and Kayaks, which is within walking distance of the beach – but it's only legal to stop at the larger island, Mokulua Nui. 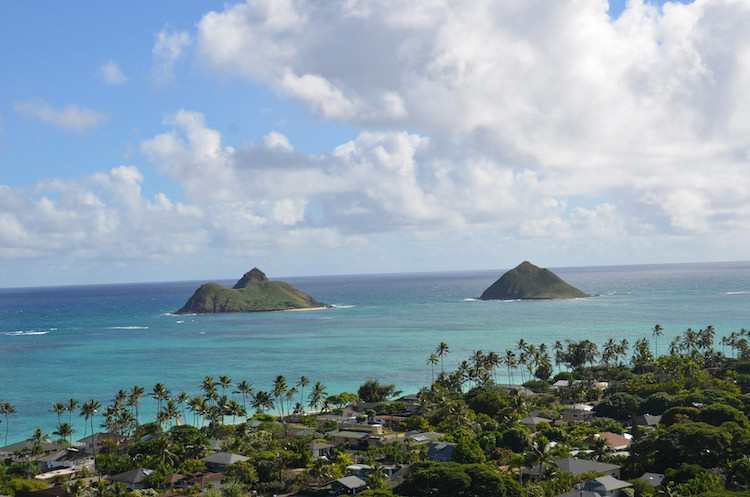 The view of Lanikai Beach from the Pillbox Trail. Credit: Bertholf/Flickr.com.

At the end of a quiet residential street behind Lanikai Beach is the start of the Lanikai Pillbox Trail, a 60-90 minute walk, depending on how far you decide to go. It's a steep climb for the first few minutes, but soon becomes an easy hike along the cliffside, rewarding you with spectacular views of Kailua, Lanikai and the Mokes directly below, and Waimanalo and Kaneohe Bay to the south.

In Kailua town, make sure you stop at Island Snow, a sportswear and shave-ice store that's a favourite of President Obama and the girls (the First Family have spent their last seven Christmas holidays in Kailua and will be back again this year). Shave ice is a Hawaiian speciality originally brought to these shores by 19th Century migrants from Japan. For a truly local taste, try the lilikoi (yellow passionfruit) sprinkled with li hing mui, a tart prune-and-licorice powder that's widely used here as a culinary seasoning.

And if you're in Kailua on Thursday, stick around for the Thursday night farmer's market, where you'll find a mix of fresh produce and prepared food served from food carts and mobile grills. Go to The Pig and the Lady and order a Pho French Dip banh mi – 12-hour brisket in a baguette, served with a pho-flavoured dipping sauce – or stop by Hibachi for a bowl of superbly fresh poke, a salad of raw tuna marinated with sesame and soy sauce. Maybe buy a bag of macadamias from Mary the Nut Lady for the ride home. Then, with the sun setting behind the Mokuluas, it's time to leave Kailua behind. Before you know it, you'll be back amongst the gleaming towers and tourist throngs of Waikiki.