Do you know why airfare prices are higher during parts of the year, while at other times, you can score a fare for a lower cost? We outline here the factors, seasons and events that can influence the price of your plane ticket.

Different seasons, events and factors in different hemispheres can affect airfare prices, although there are some months where demand is consistently high. In December, April, July and September, all destinations around the world share a similar ticket price structure due to school holidays and globally recognised public holidays such as Christmas and Easter. Designated as high season, there is no need to heavily discount these months as demand will see full planes regardless of price. The best time to secure a deal for travel in these months is between 111 to 184 days from departure. Aim to travel mid-week for the best prices if possible.

To save money on airfares outside these peak months, here’s when to book your flight depending on your chosen destination. 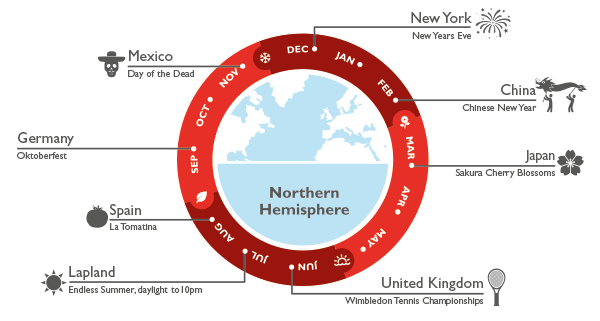 Generally speaking, the winter months in the Northern Hemisphere fall in December, January and February; although some ski seasons may begin as early as October and extend well into early April. January is still considered high season until mid month when it reverts to a shoulder season, which continues until March. New Year is also celebrated in January and February across many Asian countries, including China and Vietnam. February and March are two of the cheapest months of the year to travel as well as providing ideal conditions for the ski fields, thanks to heavy snowfall.

April usually coincides with Easter, making this month quite expensive flight-wise. By May, it’s springtime across the Northern Hemisphere and the warmer weather and great fares make this an ideal time to travel to the UK, Europe, US and East Asia, particularly if you are keen to experience the cherry blossom season in Japan.

The summer months in the Northern Hemisphere are June, July and August, and are a great time to travel to the UK, Europe and the US to take advantage of summer festivals, outdoor events and longer days – up to 12 hours of sunlight in northern Europe. Summer holidays are an institution in the US, where holidaymakers flock to celebrate the long break until September in destinations like Cancun, Florida and Hawaii. The summer months are also peak months for travel.

September is one of the most popular months for Kiwis to visit North America and Europe and the airfares reflect this high demand. It’s also the beginning of the festive season with great events like Oktoberfest, Halloween and Thanksgiving taking place during the autumn (fall) months. October is an off-peak month for travel and you’ll find great deals for flights during this month. November is another cheap month to fly, although prices can increase towards the end of the month.

December is an expensive month to travel and the period around Christmas is one of the busiest travel periods in the calendar. For travellers looking for some sun, this is an ideal time to travel to Southeast Asia. 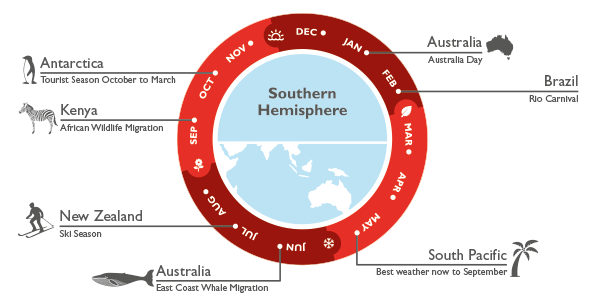 In the Southern Hemisphere, the seasons are flipped, so January and February are the height of summer. Because of the holiday season and school holidays, January is still considered high season until the middle of the month when it reverts to a shoulder or low season. It’s also the ideal time to book that bucket-list trip to Antarctica when the receding snow means it’s possible to travel further south. February heralds the pre-Lenten event known as Carnival across many countries in South America, most notably Brazil. Be aware when planning your holiday that January and February is prime cyclone season in the South Pacific with heavy rainfall across tropical areas.

After summer comes the cooler autumn months in the Southern Hemisphere. If you’re keen to visit the Maldives, March is the best month to go with amazing weather and great airfare deals. Due to Easter commonly falling in April, this is an expensive month for travel, while May brings more temperate conditions and great fares, making this an ideal month to travel.

June, July and August make up the winter months in the Southern Hemisphere. The first half of June is generally when you’ll nab better deals before the start of the school holidays in Australia and New Zealand where the demand is reflected in higher airfares. July and August are the peak winter months and a high season for fares. This is the best time of year to visit Fiji and the islands in the South Pacific with less rain and warmer weather to combat the chill in New Zealand.

September is one of the busiest months of the year for Kiwis travelling to numerous destinations around the world – falling within school holidays as well – and as such, attracts higher fares. If you are flexible with dates, consider travelling in October – a shoulder season with fantastic airfare deals to a wide range of locations around the world. November is another cheap month for travel. However, as the holiday season approaches, demand increases and fares rise sharply at the end of November.

In line with the Northern Hemisphere, December is one of the busiest travel periods of the entire year, as well as being the beginning of summertime. If you are keen on being one of the first to welcome in the new year (apart from staying in New Zealand!), Samoa and Christmas Island are some of the first nations to celebrate midnight on New Year’s Day.