Crossing from Asia to Europe: Istanbul to Nice by cruise

Megan Singleton cruises back in time.

They called it the Greek Antiquities cruise: a voyage from one of the oldest cities in the world back through the recesses of time. It was brilliant from start to finish.

The itinerary on board small luxury ship L’Austral, a boutique Ponant cruise ship, was from Istanbul to Nice via the Corinth Canal, Sicily, Greece and France. The voyage was eight days, but of course, if you’re going that far you’ll want to add a few extra days at each end.

We arrived in Istanbul with two days to explore the city that’s divided in half by the Bosphorus Strait. Our hotel was on the European side, our sightseeing was on the Asian side, and along the route (by tram) we stopped for wine and nibbles at one of many restaurants located on the Galata Bridge. The bridge crosses the Bosphorus at one of the narrowest parts and is dotted with fishermen and diners. 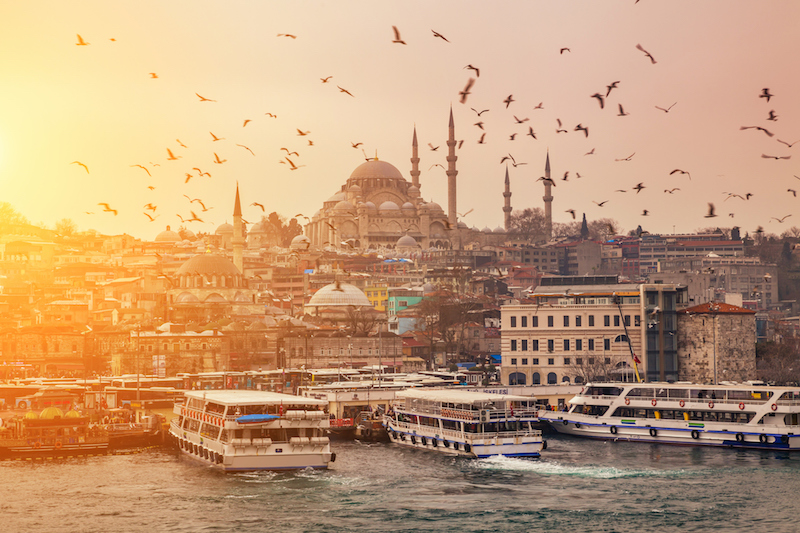 We had four must-sees:

The Istanbul Spice Market is a riot of smells and colours but a fraction of what the Grand Bazaar is so my tip would be to visit this market first. Turkish vendors are friendly and there are many things they want you to try, including Turkish delight. Tip: pick out your own box of delights to take on the cruise with you.

You’ll see mounds of ground spices and tea and herbs, some to be scooped into cellophane bags (and yes you can bring those into New Zealand. Just make sure you declare them). 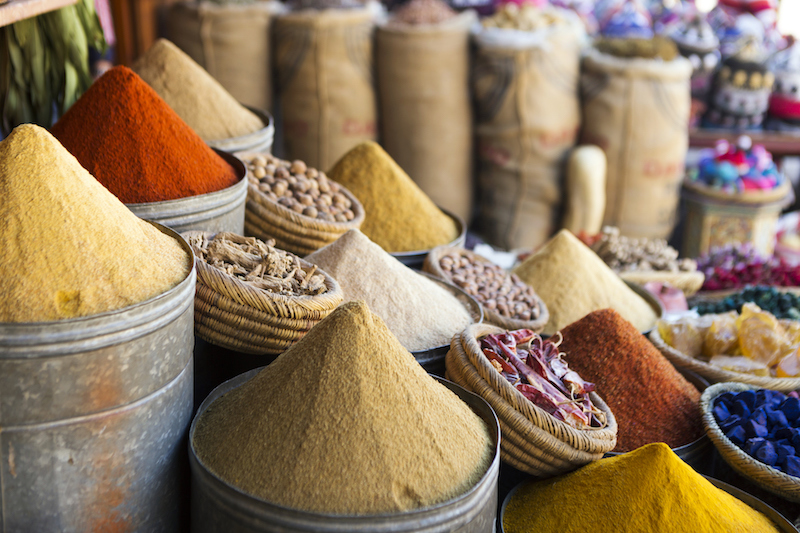 Spice Market: Make sure you take some home! (Getty Images).

This monstrous and ancient market will assault all your senses in the most wonderful and overwhelming way. There are 18 gates leading into this vast market of 4,500 shops employing 25,000 people along 61 covered “streets”, all eager to engage you in conversation and offer you apple tea.

We went for our first visit with a male local guide who included the Grand Bazaar on our walking tour and we were spared much hassling. In fact, it was so enjoyable that we thought the Grand Bazaar a doddle. The next day, the two of us females went back by ourselves and it was a whole new ball game: you need to have your wits about you. 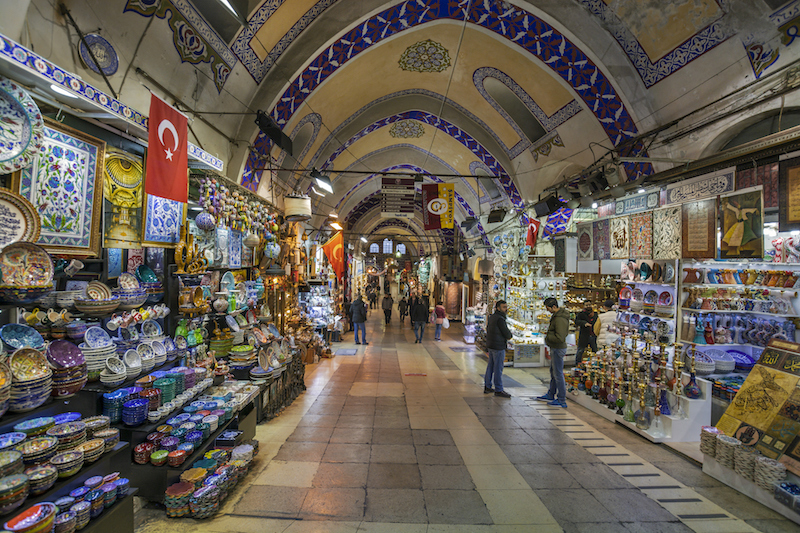 Grand Bazaar: The Grand Bazaar is one of the great markets of the world (Getty Images).

Also known as Hagia Sophia, this is a must-see stop. Originally built as a Greek orthodox cathedral in 587AD, it became an Ottoman mosque in the 1400s and today stands as a museum. It’s beautiful inside and if you look carefully you can still the original frescoes high on the walls amid a mix of Christian and Muslim symbols.

There is a famous hammam (Turkish bath) at Sultanahmet, but you’ll have to pay top tourist dollars. You’ll also find hammams in several hotels although they’ll be designed to be a bit more western and palatable. I went to one that left me with my eyes wide and my modesty checked at the door.

For a truly traditional hammam, try Galatasaray Hammam in Beyoglu. It’s the second oldest hammam in Istanbul (after the one down in Sultanahmet). English isn’t widely spoken here but with much gesticulation, I was shown into the women’s only bathhouse. I was directed to the stone stage in the centre of the room where other women lay waiting for what was to come next.

I won’t ruin it for you: suffice to say that every cell on my skin was scrubbed to cleanliness. I was directed to the side of the room where I followed what others did and had my hair washed, being left to rinse with a pewter bowl and freshwater. Tip: bring your own conditioner. I left with a bird’s nest on my head.

Ponant’s L’Austral was our home for the next seven nights. Ponant is French owned and has a fleet of small, boutique cruise ships. They’re proudly French with their cuisine and wines and even the crew all calling France home. Ponant’s fleet are luxury ships offering five-star service, yet they’re not so flash that we had to wear fancy gowns.

On board we had a spa, hammam, gym and hair salon. You’ll also find a spacious pool deck and a heated seawater pool. There are two indoor lounges/bars and a great outdoor bar on the back deck to while away the evenings. There’s also a theatre where you’ll be able to hear presentations about the places you’ll be visiting and at night you’ll be able to see a show.

Because the boat is small, you’ll meet your fellow travellers pretty soon, joining in with others for meals and sharing tall stories and experiences. We found the passengers to be very well travelled and many had visited New Zealand.

We pulled out of the Port of Istanbul into the famous Bosphorus Strait to the Sea of Marmara. We cruised past Gallipoli into the Aegean Sea on our way to our first stop in Greece. If we weren’t already turning in circles at the history of Istanbul, we were whirling dervishes at the remains of the Temple of Apollo that we got to clamber over on one of the daily excursions. 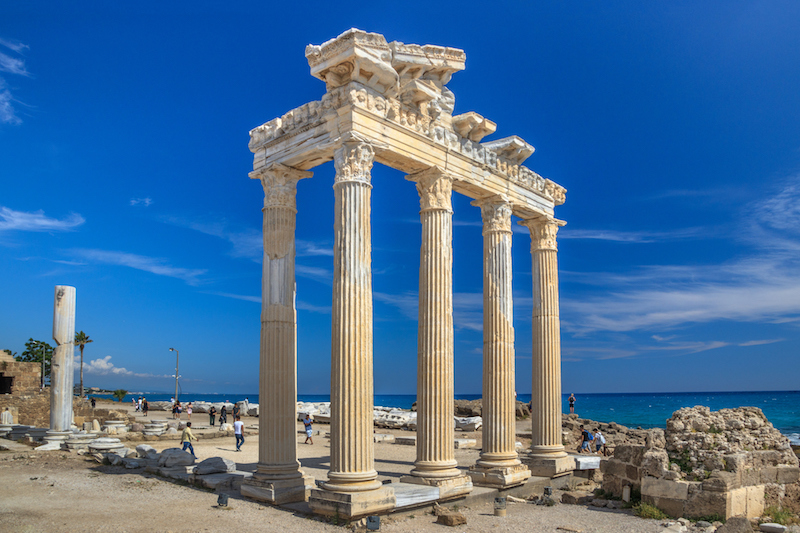 We learned about the oracle, we saw where sacrifices were made to the gods, and heard about the fortunes of the people who lived and made pilgrimages there. We looked out over unspoiled landscapes of rolling hills dotted with olive trees and shopped in the nearby villages for oils and souvenirs.

Our visit to Olympia – the site of the first Olympic Games – was a highlight (I posed on the marble start line of the first sprint races). We learned that athletes performed naked and eventually when women joined they wore toga-like dresses with one breast showing – all in the name of proving they were not cheating.

The city of Pompeii was an eye-opening visit. There are still some bodies enshrined there from when Mt Vesuvius erupted and turned everything to stone in 79 AD. 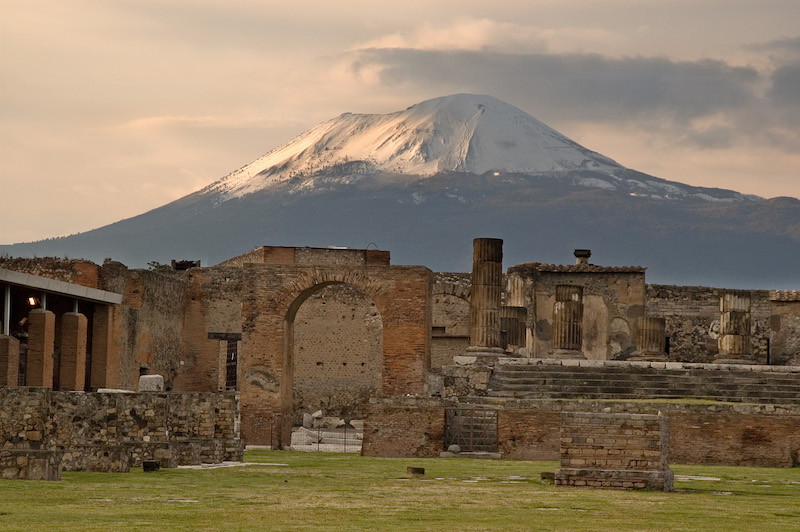 The spectacular site of Pompeii beneath Mt Vesuvius (Getty Images).

But to be towed through the engineering marvel that is the Corinth Canal is really something else. Even though it was night time, we all stood on the decks and watched as the ship was quietly eased through with barely a metre of room on each side. If it wasn’t for this six-and-a-half kilometre canal, we’d have to cruise another couple of days around the outer reaches of southern Greece. This way we were able to cruise around the Ionian Islands and across to Sicily.

Eventually we arrived in Nice and spent a couple of extra nights at a hotel there exploring the French Riviera, sampling the produce markets and eating outdoors pretending to be locals. 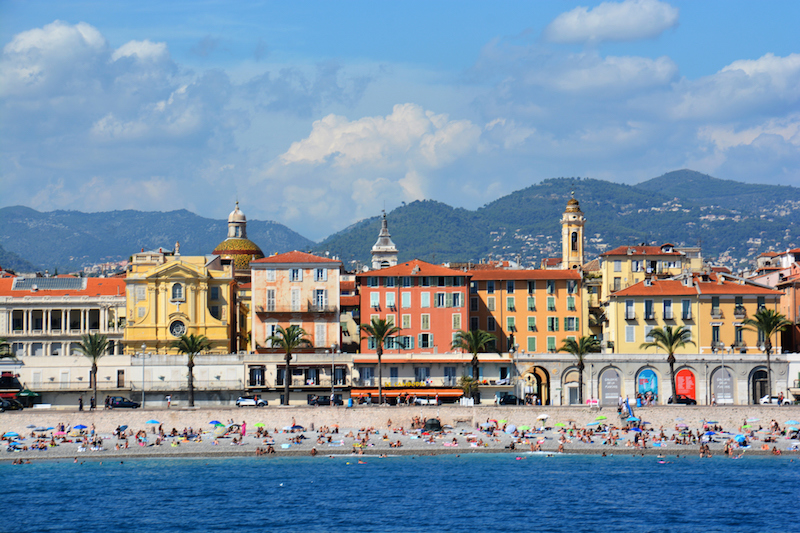 Megan Singleton is an award-winning Auckland-based freelance travel writer and founder of Blogger at Large. Her site is listed in the Top 50 travel blogs in the world.