Cruising to Antarctica: exploring the final frontier in comfort and luxury

Silversea is best known for being a top-end small ship cruise line with butler service for all guests, a choice of fine restaurants and public spaces hung with the likes of Picasso, Chagall and Degas. So how do their expedition ships fit in with all of that on a trip to the most remote continent on the planet?

Judging from 18 days on the Silver Explorer that featured the Falkland Islands, South Georgia and the Antarctic Peninsula, the answer is: effortlessly. The butlers were still there — white gloves and all — as were the elegant surroundings, beautifully-presented food and wine, comfortable suites with niceties like personalised stationery, and the overnight learning of all our names by every member of the staff. Even with a ratio of 136 guests to 116 crew, that was impressive. Spread over four accommodation decks were suites ranging from Adventurer to the spacious opulence of the Grand.

Although compact, all the usual facilities were there, such as a spa, fitness room, salon, library, boutique and laundrette. But they were supplemented on this sturdy 1-A ice-class ship by expedition necessities. These included a fleet of rigid inflatable Zodiacs for ship-to-shore transfers, a wet room for cleaning footwear (biosecurity was taken very seriously throughout the voyage), and a team of well-informed and enthusiastic expedition leaders. 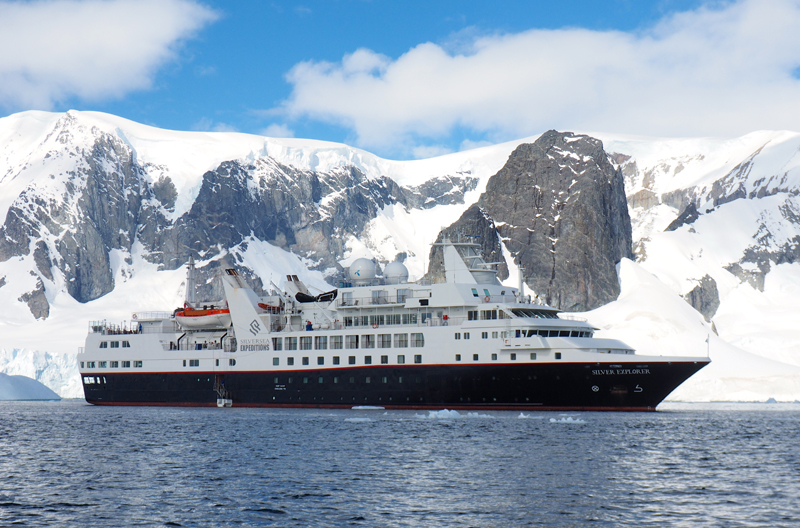 The 1-A ice-class ship has all the luxury and expedition essentials you need for an amazing experience.

While the remarkably cheerful and efficient house-keeping and restaurant staff maintained home comforts and Captain Piers kept us all well informed about things like the weather and sea conditions, it was the expedition leaders who really intensified our experience. With specialists in topics like whaling, geology, exploration history, photography and wildlife, the sea-day lectures in the theatre were informative, entertaining and interesting.

Right from our departure from the colourful little town of Ushuaia, Argentina (proudly self-titled “the southernmost city in the world”), expedition leader Tim and his team were there to answer any questions and point out things of interest — a non-stop task on a cruise like this. They also drove the Zodiacs, conducted hikes and tours ashore, and were unfailingly patient and helpful.

They’d be the first to admit though that they were mere bit-players on this cruise, with the true stars of the voyage being the glorious environment we were sailing through in such comfort along with the wildlife that inhabited it: penguins, seals, whales, dolphins and seabirds. 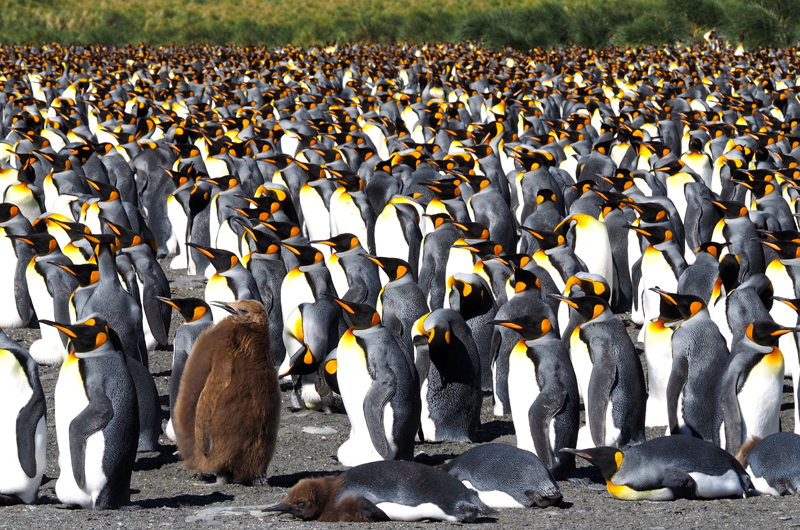 The wildlife you witness on the cruise is varied and unique.

Gliding along the Beagle Channel, we left behind Tierra del Fuego’s mountains — the last gasp of the Andean chain as we learned from geologist Wolfgang — and set out across the South Atlantic towards the Falkland Islands. The islands were more than a day’s sail away — the first of seven days at sea. Far from being lost time, the days were enjoyably filled with lectures, wallowing in the steaming Jacuzzi, watching out for birds and sea life, socialising with guests from 19 countries ranging in age from 9 to 84, and surrendering to the soporific rocking of the ship.

From our first landing at West Point Island off West Falkland, it was all on with the wildlife, getting up close and personal with stern-looking black-browed albatrosses and clown-like rockhopper penguins, all mixed in together and busy with eggs and nestlings. They took little notice of us as we were clicking our shutters, loading up the first of many gigabytes of images. 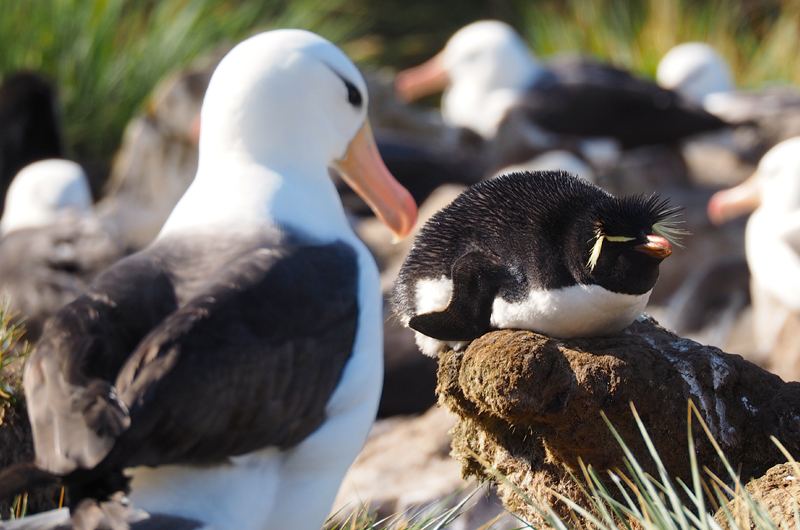 The Black-browed albatross and the rockhopper penguin.

The afternoon brought a wealth of penguins: gentoo, Magellanic, rockhopper and the magnificent king with their striking gold markings. In their colony were big brown fuzzy babies patiently waiting for their next feed. In the meantime, they provided an irresistible subject for photographs. Later in the voyage, Adelie, macaroni and chinstrap penguins completed our tally for the species, and it was hard to choose a favourite. They were all so cute, whether they were noisily canoodling with their partner, carefully positioning an egg on their feet, waddling awkwardly over the rocks, tummy-surfing on the snow or impressively porpoising through the water.

Equally furry and cute were the seal pups of which we saw so many! The adults were seen at their best sprawled on icebergs in many of the bays and harbours we visited. They and the several species of whales we saw, including humpbacks bubble-net feeding and the large pod of orcas cruising alongside one evening, were always exciting to encounter, initiating a rush to the railings no matter what we were all doing.

Even more magnificent were the icebergs and glaciers. Huge, glistening, white streaked with blue. Incredibly deep and sometimes calving with a low roar of “white thunder”, the glaciers were everywhere on the voyage from South Georgia onwards. The icebergs, however, didn’t put in an appearance until we were on our way to the Antarctic Peninsula, starting with a massive tabular berg looming on the horizon and then branching out into every shape, size and texture imaginable. From ice-blue sculpted beauties clinking beside rocky beaches to awesome monsters towering over us in the Zodiacs, they were nothing short of spectacular. 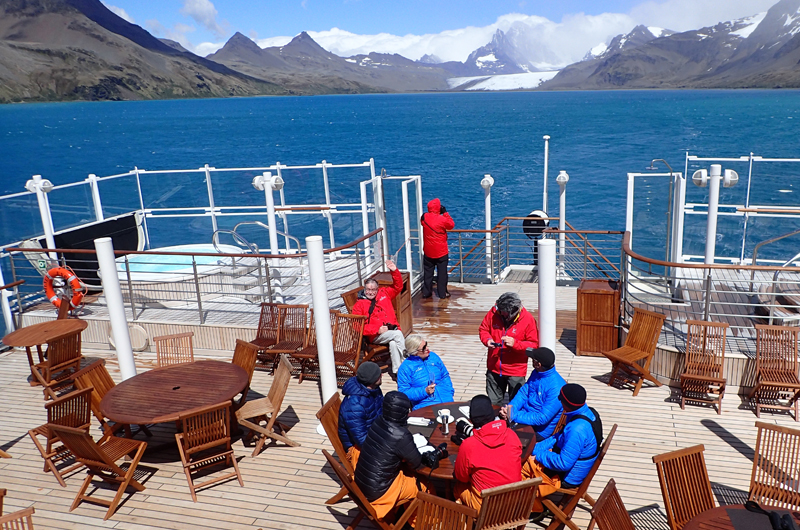 The Silversea cruise makes visiting some of the world's most inhospitable environments comfortable and easy.

The Falkland Islands were quaint and idiosyncratic with their red telephone boxes, pubs and emphatically English residents. South Georgia was full of fascinating relics of its whaling history, and was a major location in the riveting story of Ernest Shackleton’s epic feat of endurance and courage. It was especially touching when we all gathered at his grave to drink a toast to “the Boss”. The remote and basic Argentinian refuges in the South Shetland islands were a testament to stubborn persistence. They were all fascinating.

Best of all was simply being in Antarctica; in the sunshine and snow, bundled up against the cold or unexpectedly stripping off layers, and appreciating this still virtually untouched frozen continent with all its natural treasures of scenery and wildlife. It’s a once-in-a-lifetime destination, forever special, forever memorable, and thanks to Silversea, effortlessly accessible.