Cruising the Christmas Markets In Europe

Sugar and spice and all things nice: that’s what you’ll find on a cruise visiting some of Europe’s prettiest Christmas markets.

Christmas comes early in Europe. As soon as Advent begins around early December (to celebrate the ‘coming’ of Jesus into the world), the short days and long nights are brightened by the marketplaces of towns and villages. Clusters of colourfully decorated wooden huts start to appear, selling everything connected with Christmas.

One of the best ways to enjoy these Christmas markets is on a river cruise, and in December, Uniworld offers seven different routes on the Rhine, Danube and Seine. The company’s signature ornate style perfectly suits the gaudy sparkle of the marketplaces, but takes it to another level entirely. Each ship is different and unique, featuring glories such as hand-blown Murano glass chandeliers, elaborate ceiling frescoes, a real fireplace, a gold-plated lift, an indoor waterfall, and original artworks by Picasso, Chagall, Matisse and Miro. The overall effect is of being inside a floating chateau, grand and beautiful. 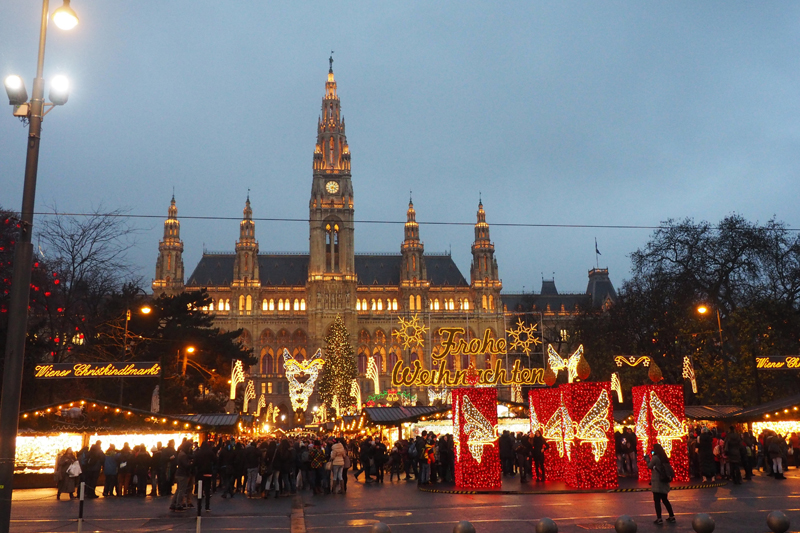 Main Christmas market in Vienna. Photo: Pamela Wade
These decorative extravagances in public are mirrored by a similar attention to detail in the privacy of the suites. Here, rich patterns and plush fabrics add to the comforts of fine linens on a deep mattress, a marble bathroom with L'Occitane toiletries, and a butler who will do his best to meet any request. It’s an intimate environment with no more than 154 passengers on these routes. Uniworld’s staff to guest ratio is an astonishing 3:1, so the standard of service is exceptional, without being stuffy.

This certainly applies to the restaurant, where eager waiters bring memorable dishes to the table. Produced by each ship’s minimum of seven chefs, they reflect, besides the season, the cuisine of the surrounding region. Naturally, this also applies to the wines - all drinks, incidentally, are included on Uniworld — but notably to the cheeses as well, with a choice of three different kinds each night of the cruise. 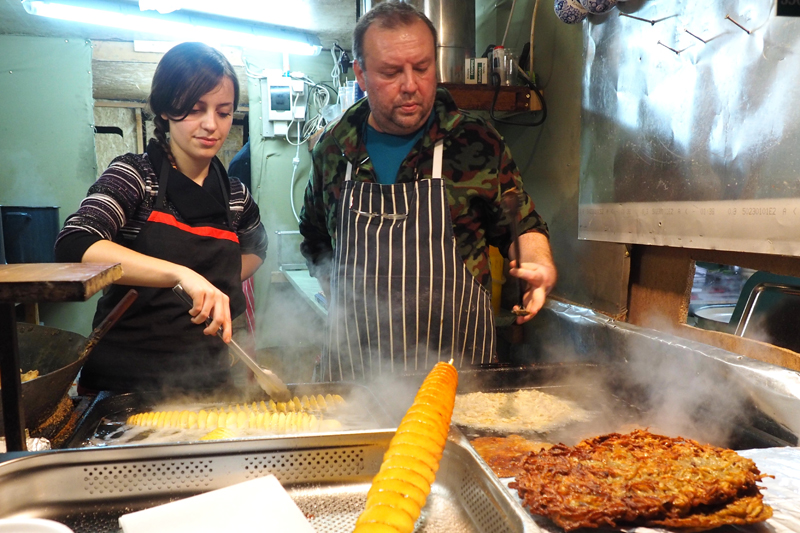 Potato snacks in Bratislava. Photo: Pamela Wade
At Christmas, there should be no guilt about self-indulgence either on board or ashore - and there’s certainly no avoiding it. While these rivers, each of them historically a major European thoroughfare, are lined with towns and cities that make for fascinating visits at any time of the year. At Christmas, they offer a whole new element of gorgeousness, much of it edible.

On an eight-day cruise up the Danube from Budapest to Passau, for example, we pass through Hungary, Slovakia, Austria, and Germany - all countries known for venerating the humble potato, and at the Christmas market food stalls, it’s elevated into a dish fit for kings. Cheesy hash browns, deep-fried spiral-cut crisps, potato-flour pancakes filled with bacon or Nutella, simple baked spuds to eat with sausages: hot, crispy and delicious, and perfect for when the temperature hovers around freezing. 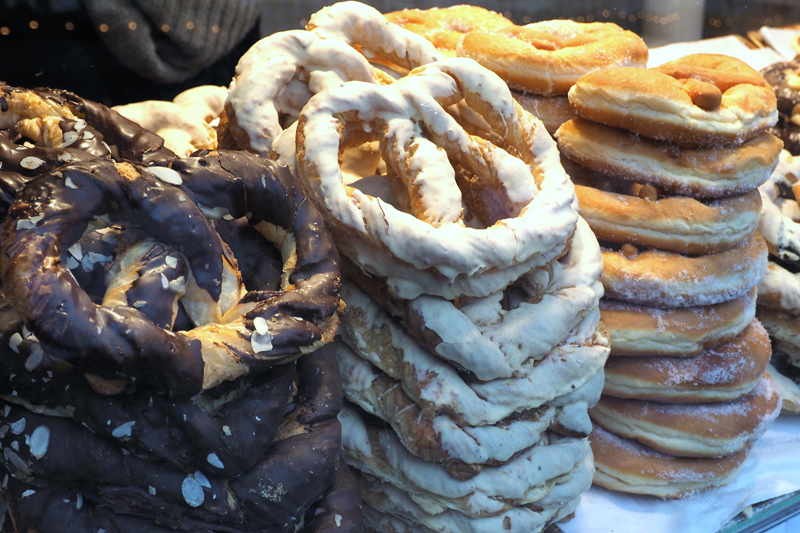 Delicious dessert pretzels. Photo: Pamela Wade
That’s just the first course. Equally irresistible are the freshly-made apple strudels, iced pretzels, chocolate cakes, gingerbread, and sugar-coated pastries. Suffusing the air with the scent of cinnamon and cloves is the mulled wine that’s the perfect answer to the chilly winter temperatures. It certainly appeals to both tourists like us and the office workers who crowd the markets come 5pm, standing in sociable clusters around tall tables and adding to the overall buzz.

Teenagers, meanwhile, spin around the temporary ice rinks, showing off, flirting, and dancing to the piped music. There are families with small children, who are drawn like magnets to coo over the nativity scenes with real sheep and goats, and gaze up in awe at the traditional towering Christmas tree bright with lights and decorations. These glitter and sparkle in the dark not just on the tree, but on the stalls too where they’re both for effect and for sale. Carved, blown, painted, glittered, the variety of ornaments is dazzling. Their only common features are that they’re all so pretty and so hard to resist. The muffled-up stall-holders sell other hand-made crafts too: glass, pottery, wood, hats, scarves, toys, and candles. It’s Christmas shopping, however you look at it. 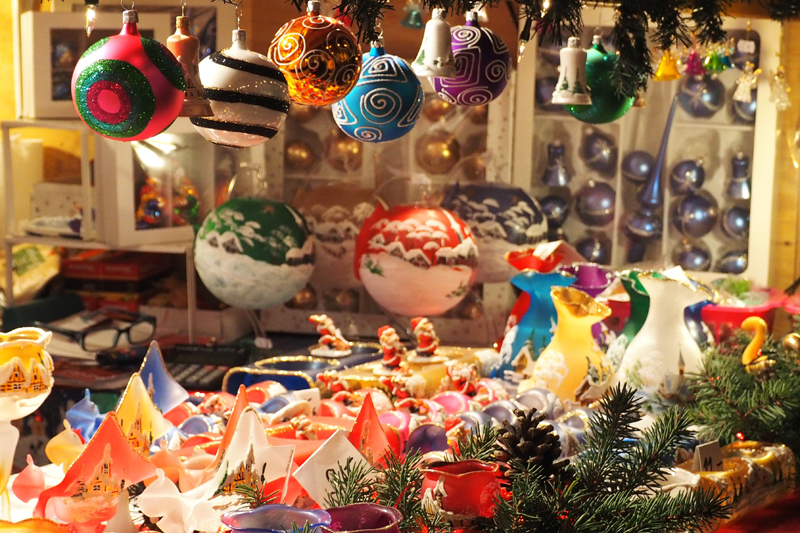 Christmas ornaments on sale in Bratislava. Photo: Pamela Wade
Everything is especially lovely in the cold and the dark: the sights, the sounds, the smells, the tastes. But there are many other treats too on a Uniworld Christmas cruise. Back on the ship, which is also beautifully decorated and features a huge iced gingerbread house in the foyer, musicians come aboard to entertain us after dinner, playing unusual instruments, singing carols and dancing.

Then there are the concerts. In a 300 year-old baroque chapel at a monastery near Krems, ‘Silent Night’ and ‘Oh Come, All Ye Faithful’ are played on a huge organ, their notes swirling around the gilded columns up to the painted ceiling high above. In Vienna, we’re treated to a private concert in a richly-decorated hall built in 1738, with perfect acoustics that delight the musicians as much as they do us. Local boys Mozart and Strauss dominate the programme, which also feature opera singers and waltzing couples. 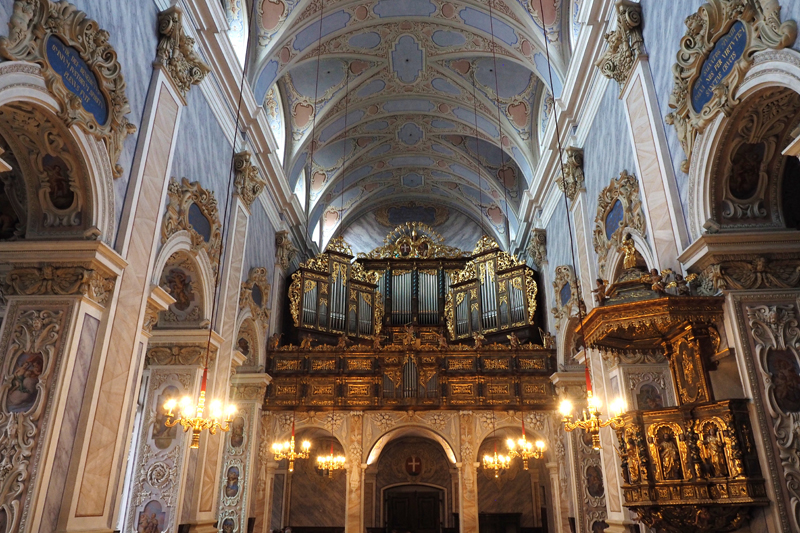 Baroque chapel in Krems, Austria. Photo: Pamela Wade
Vienna and Budapest are the stand-out stars of the route, with magnificent buildings and streets of enticing shops. Then there’s St Stephen’s cathedral with its patterned tile roof and soaring interior. There are also the cosy coffee houses with newspapers on wooden racks with rich chocolate Sachertorte under glass domes.

Budapest’s castle, cathedral and parliament buildings all face each other across the Danube, which must make the most imposing stretch of river bank in the world. But there are the thermal bath houses too, with pools both inside and outside, steam blurring the elaborate décor. 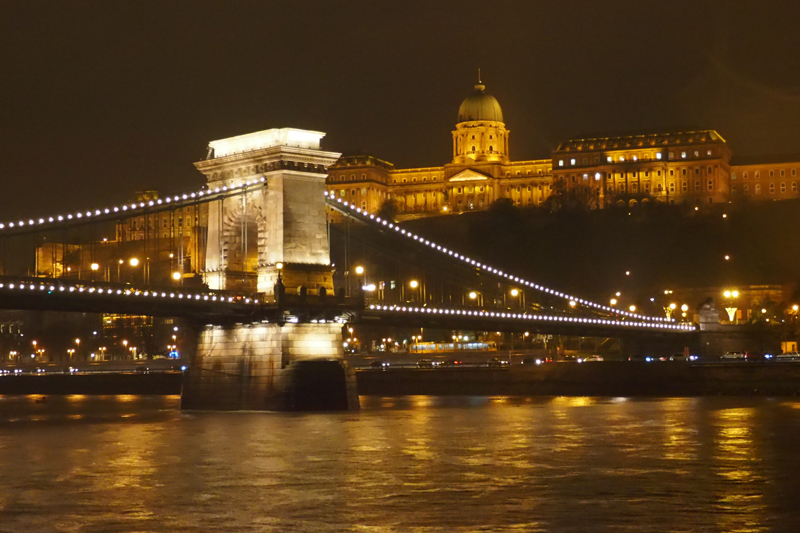 Budapest from the water at night. Photo: Pamela Wade
Both cities have their share of grim history too, much of it focused on the Second World War and presented with confronting candour. On a cold, grey, December day, it can be chilling in every sense. So it’s a huge relief to return to a warm welcome back onto the ship, to freshly-baked gingerbread biscuits and mulled wine, sparkling decorations and elegant comfort.

Good food and company, music and fun all lie ahead. It’s the essence of Christmas.