A culture-lover’s guide to Argentina

It’s budget-friendly, it’s an easy non-stop flight away, and it’s home to one of the most fascinating cities in the world. Argentina is a culture-lover’s dream, most especially so in Buenos Aires, widely considered the Paris of South America. Here’s what not to miss. 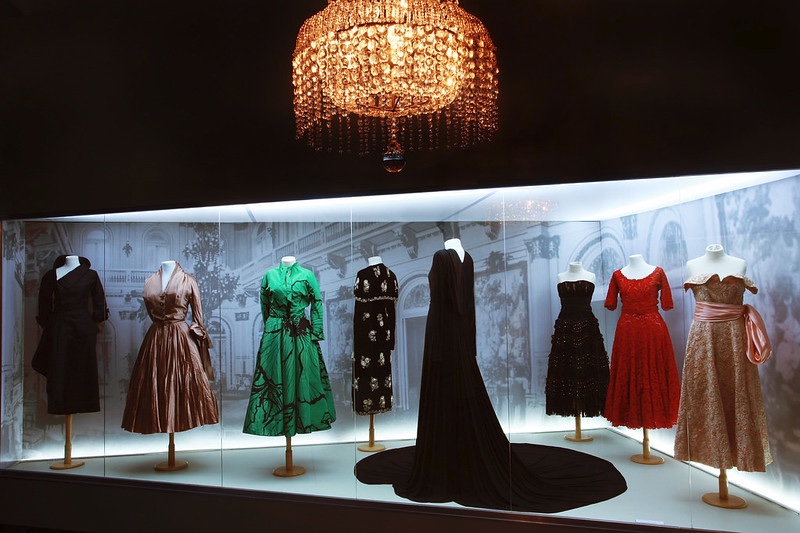 Dresses on display at the Museo Evita. Photo: @travelbuenosaires
The word “icon’ is overused these days, but there really is no better way to describe Eva “Evita” Peron. The former first lady of Argentina may be best known to most of us as the heroine of the Andrew Lloyd Webber musical, but in Argentina she is still revered and beloved to this day. Born in poverty, she married Juan Peron in 1944, two years before he became president. During his time in office Evita was a tireless advocate for the poor and for women’s rights; she was named the official Spiritual Leader of the Nation shortly before her death at the age of just 33.

The Museo Evita is packed with the first lady’s belongings, including a large selections of elegant clothing and beautiful jewellery, alongside memorabilia and media covering her celebrated life and tragic death. After your tour, make time for lunch at the outdoor courtyard restaurant, a delightful spot with famously friendly service. 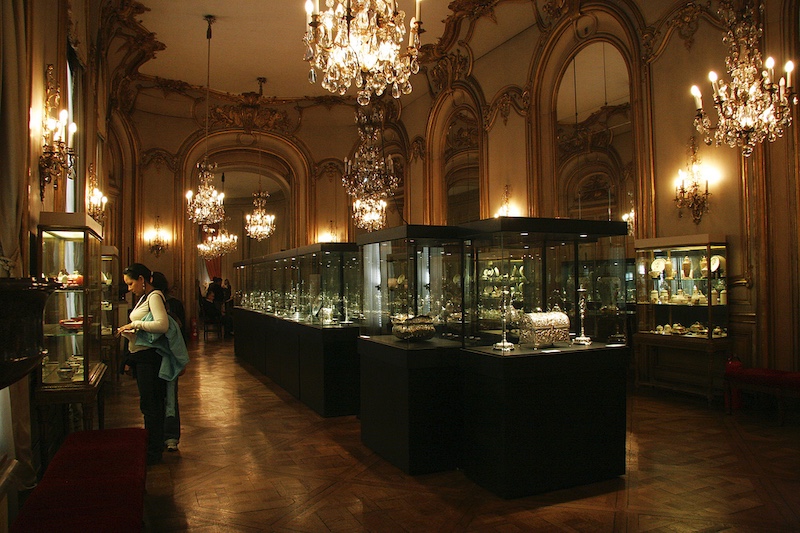 The silverware and china collections at the National Museum of Decorative Art, Buenos Aires. Photo: Sherlock4000 / CC BY 2.0
Explore the life of early 20th century Buenos Aires high society at the Museo Nacional de Arte Decorativo (National Museum of Decorative Arts, or MNAD). Located in the Recoleta neighbourhood, the museum is housed in a palace that once belonged to the aristocratic Errázuriz Alvear family, and was designed by the same architect who built the Trianon Palace Hotel in Versailles, France. Some of the museum’s most magnificent rooms are modelled on originals in the Versailles Palace itself, and its collection – much of it formerly owned by the Errázuriz Alvear family – includes 16th-20th century European furniture, sculpture and paintings.

Through revolution and war, hard times and prosperity, the people of South and Central America have told their stories through art. At the Museo de Arte Latinoamericano de Buenos Aires (MALBA) the permanent collection showcases artwork from the 20th century, while temporary exhibits tend to focus on currently active Latin American artists. Considered one of the best modern art museums on the continent, MALBA is a great place not only to discover great art, but to learn more about South America’s turbulent history. 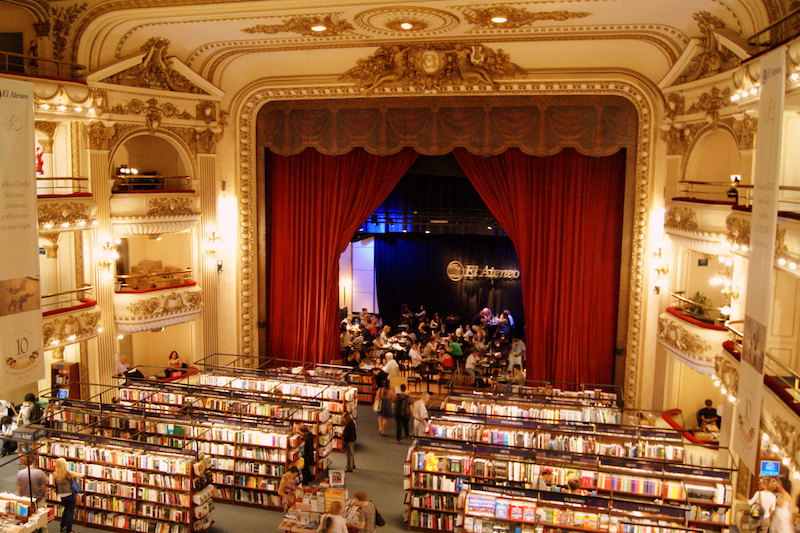 El Ateneo Grand Splendid. Photo: Eduardo Zárate / CC BY-ND 2.0
National Geographic called it ‘the world’s most beautiful bookstore’ and we think you’ll agree. Housed in an ornate former theatre – the Teatro Grand Splendid, built in 1919 – the building became a cinema (with live tango orchestration to accompany the silent movies) and then, finally, a bookstore in 2000. You’ll browse ground level shelves under the soaring frescoed ceiling and overlooked by other book-lovers doing the same on the balconies and theatre boxes above. Not in the mood for shopping? (Most of the stock is in Spanish, after all). Order afternoon tea and cake at the instore cafe – you’ll find it on the main stage. 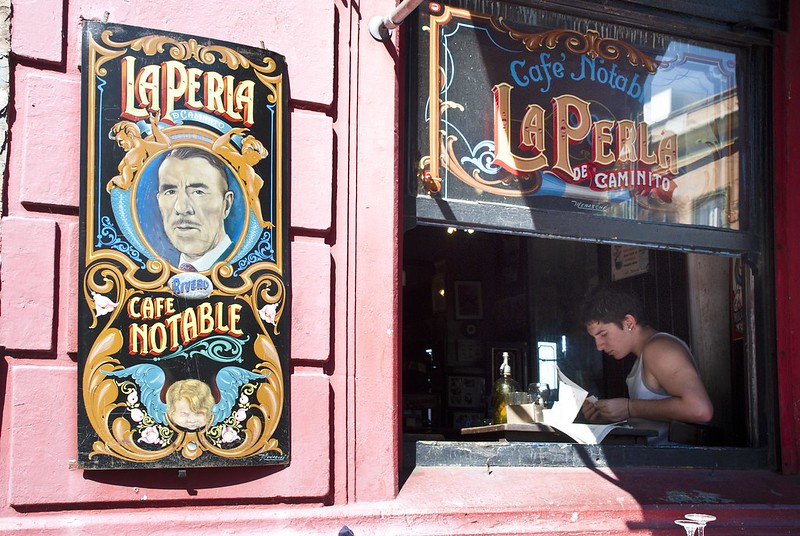 Café La Perla, a bar notable in La Boca, Buenos Aires. Photo: @travelbuenosaires
As befits its status as South America’s most European city, Buenos Aires has had a thriving cafe scene for well over a hundred years. Today there remains more than 70 bares notables – historic cafes with listed status due to their cultural importance  –  many of which were regular haunts of Argentine icons like author Jorge Luis Borges and politician Juan Peron. One of the most renowned is Confitería del Hotel Castelar, a meeting place for writers in the lobby of the hotel where Spanish poet Federico García Lorca lived for six months in 1933. For somewhere a bit more glam, head to the magnificent Las Violetas. Patrons have been taking afternoon tea in its Art Nouveau surrounds since 1884. 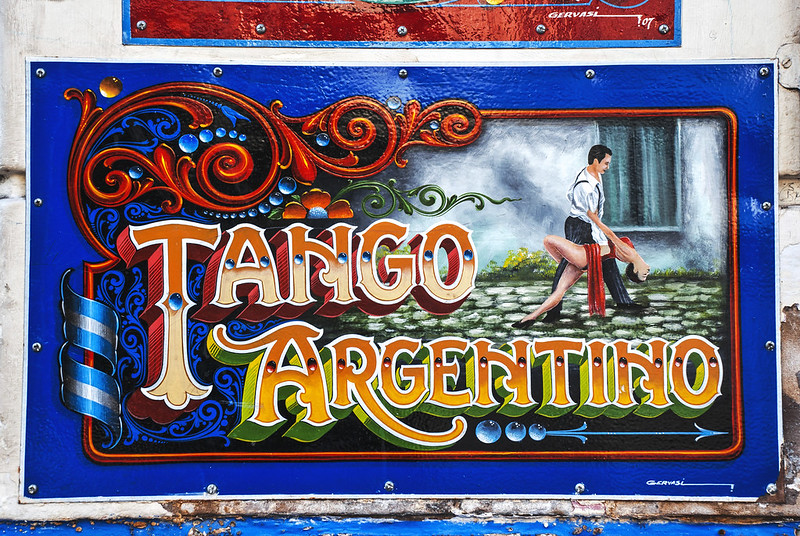 A sign on Buenos Aires’ Pasaje Carlos Gardel, a passageway paying tribute to the most important figure in the history of tango.
If you’re keen to try tango, Buenos Aires has a number of places to learn to dance; options run the gamut from quick lessons before a tour-group visit to a milonga (an event where tango dancing is performed), to intensive, months-long courses. Those of us who are happy to leave it to the professionals have plenty of options too. The best venues to watch the pros in action include El Viejo Almacén and Bar Sur, both in the San Telmo neighbourhood. In the central city district of Montserrat, head to Café Tortoni, officially Buenos Aires’ oldest cafe/bar. 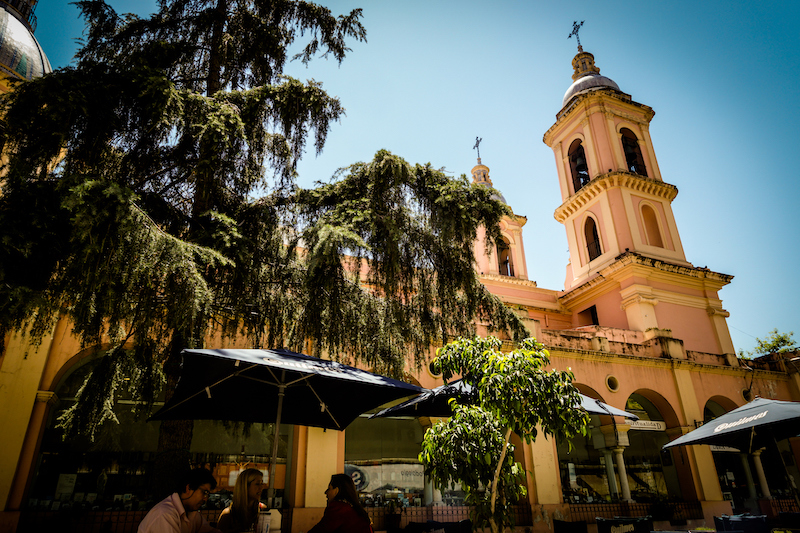 Basilica of Santo Domingo, in Cordoba, Argentina. Photo: Getty Images
While the capital has the lion’s share of important cultural institutions, Argentina’s smaller cities boast fascinating museums, historical landmarks and other attractions reflecting the unique culture of the surrounding area. Mendoza and Cordoba are famous for their well-preserved Spanish colonial buildings, and Mendoza has the added attraction of being at the heart of Argentina’s wine producing region.

If you make it to the northwest of the country, you’ll find that the city of Salta is a hidden gem. Originally part of the Incan Empire, the area fell under the control of Spain following the arrival of the conquistadors in the 1500s. Today Salta contains remnants of both cultures – the Spanish in the elegant architecture, and the Incas in places like the Museum of High Altitude Archaeology. The museum was built following the discovery of the Llullaillaco Children, three exceptionally well preserved mummies of children who were sacrificed on top of a nearby volcano. One mummy at a time is exhibited in a special climate-controlled sarcophagus, with the museum changing the mummy every six months to minimise damage.