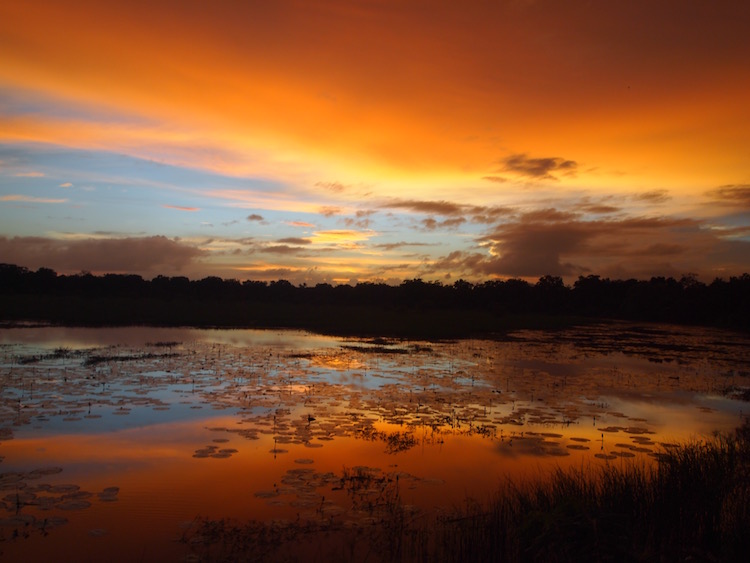 Night falls quickly in the jungle. It’s like someone has reached in and pinched out the one candle flame keeping the whole place lit up. Poof. Gone is the day’s spectacular view of towering tamarind trees set against a tropical sky. And, just like that, the dirt track I’m travelling on disappears into blackness as if it’s been control-alt-deleted. I’m convinced the jungle’s no place for a tourist after dark.

That’s why our open-sided Toyota land cruiser is gunning it to the exit gates of Sri Lanka’s Yala National Park. It’s not quite 6.15pm but the sky’s been an urgent swirl of pink and orange for at least half an hour, signalling last minutes till lights out. It’s clear: the day is done; it’s time for us to skedaddle. 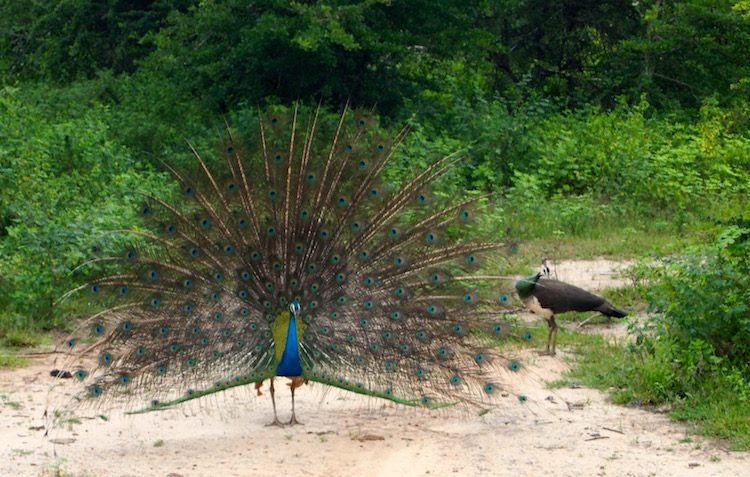 There’s an estimated 100 Sri Lankan leopards in Yala National Park who use the cover of night to hunt for prey. Their preferred meal is the spotted chital deer or common langur monkey. Though I’m told they’ll imbibe anything from a dung beetle to fully-grown buffalo – even humans if the opportunity arises.

As recently as 2011, Sri Lanka’s largest mammal predator killed a 31-year-old mother-of-two right here in Yala. Part of a 25,000-strong procession making an annual pilgrimage that takes in a chunk of Yala National Park, she was killed at dawn after resting overnight at a dry riverbed. It was mid year: the park was at it’s driest, food was scarce and the wild cats were famished. 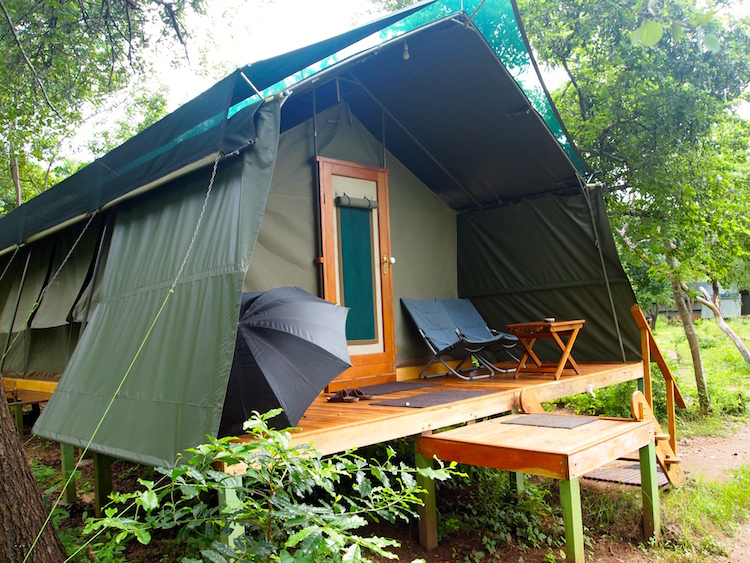 In contrast, I arrive for my three-day safari during December’s abundant, wet season. I’m hoping the odds for spotting a leopard are still good, while my chances of getting stalked, attacked from behind, then dragged across a riverbed are much less so.

It’s about 6.00am when we enter the gates the next morning. The plan is to see a leopard skulking home from a night on the hunt. We’ll ride the rutted dirt tracks at break-neck speed for three hours, returning to camp to escape the heat of the day, grab breakfast and have a lie down. By 3.00pm the next three-hour shift will begin. This is the daily cycle. 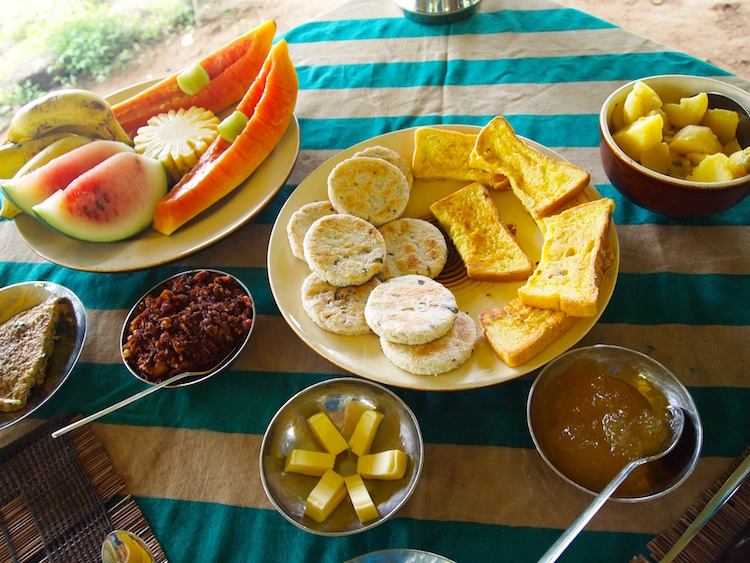 Living among Yala's leopards in Block One are 150 Sri Lankan elephants, more than 200 bird species and 44 varieties of mammal, including jackals, sambars, deer and the cute – but apparently rather vicious – sloth bear.

That morning I see five elephants. Impressive, majestic, wonderful, I think, until one of the park’s rare male ‘tuskers’ blasts out of the jungle with a high pitch wail that sounds like he’s ready for murder. 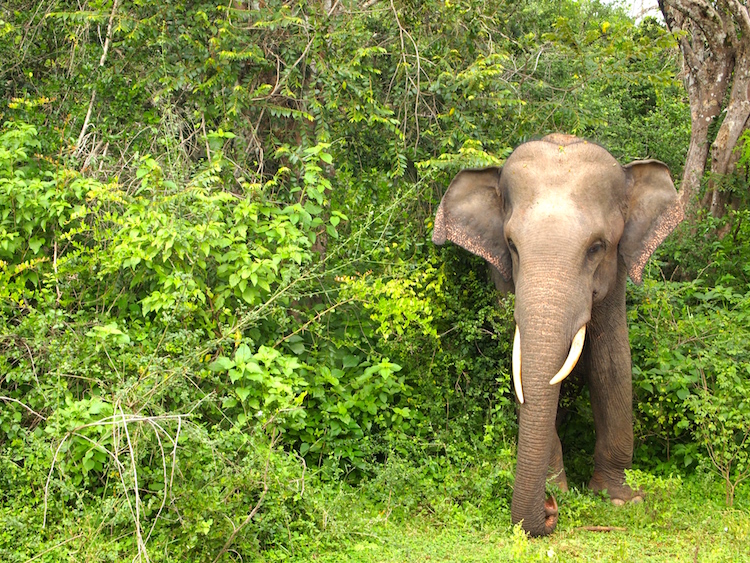 Thankfully, I realise there’s a lighter side to jungle life, too. I see peacocks dancing, buffalo lolling up to their necks in mud and sweet families of ruddy mongoose dashing across open grassland in what looks like play.

More relaxed now, I don’t flinch when we come across a fist-sized tarantula clinging to a tree trunk. My guide, Manjula, tells me it’s uncommon to see tarantula during the day. Like leopards, they prefer to come out at night. I brazenly hope it’s a positive sign we might spot a big cat too.

Then, that afternoon it happens. We see our first and only leopard, lounging in the canopy of a tamarind tree. There’s a good few metres between us. But I can still see the rise and fall of his spotted torso and the languid movements of his large, floppy paws. I go mad click-click-clicking the camera, shooting him from every angle. I lean way out of the jeep to Instagram him. I extend my arms out as far as they’ll go to video him for Facebook. I peer at him through my camera’s zoom lens; then I have a good gawk with the binoculars, too.

Twisting the binocular’s focus wheel, I hone in on two unblinking, yellow eyes. I look at this wild cat looking back at me like he wants to get in one more kill before noon. And suddenly I’m not feeling so thrilled anymore. I’m the smallest in the jeep. Easy pickings – is that what he’s thinking? I know these cats aren’t fussy. I know they’ll take anything they can get. All it takes is the perfect opportunity.

How to get there: Fly to Colombo from New Zealand via Singapore. Hire a car and driver from Colombo to Yala (about a six-hour drive). When to go: Best time is the dry season between February and July when water is scarce, bringing animals into the open. Where to stay: Kulu’s three-day safaris are fully catered and led by some of the park’s most experienced guides.

Jacqui Gibson is a Wellington-based freelance travel writer and photographer.