There is no denying it, the taking of a pint is at the core of Irish culture. It is therefore unsurprising that Dublin is full of good public houses. Each has a back story, and if the yarns are to be believed Ireland’s famous literary son James Joyce drank in practically every one of them. Whether Dubliners are full of the blarney or not the city has a rich tradition of welcoming watering holes to suit every taste and sensibility. The following is a small selection, from the traditional to trendy to just plain picturesque. 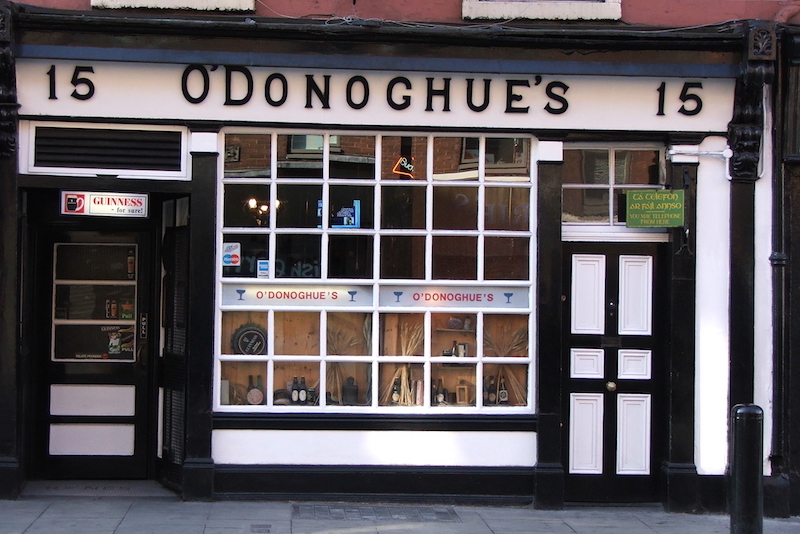 O’Donoghue’s is a Dublin musical institution and has been famous for its nightly traditional Irish music sessions since Paddy and Maureen O’Donoghue began running the pub in the 1930s. Its more recent pedigree is as the haunt of Irish music legends The Dubliners and Christy Moore. As one reviewer described it, the pub’s rickety wooden floor and dim nooks provide a “pleasingly gloomy” atmosphere as the pints flow and the music sweeps over you. It’s also a favoured rugby bar, and when Ireland welcomes fans from competing nations the atmosphere is electric. O’Donoghue’s can’t boast about its food but it is praised for not serving the Guinness too cold. With a courtyard for summer evenings, O’Donoghue’s is a two-minute walk from St Stephen’s Green in the city centre and is a must visit if you're looking for an authentic pub. This lavish Victorian pub is so picturesque that it has often appeared in movies and television shows, such as Educating Rita and a recent Guinness advertising campaign. The Stag’s Head was built in 1770 but remodelled in 1895, and thankfully hasn’t changed much since. Full of elegant stag-themed stained glass windows, carved mahogany fittings and mosaic marble tiled floors, it’s no coincidence that some of the fitters who worked on churches in the area probably also worked on the pub. Today it has bars on three floors and offers entertainment including traditional music sessions, ukelele nights and standup comedy. On the menu are local favourites such as beef and Guinness casserole and bacon and cabbage. The Stag’s Head is a short stroll from the heart of Grafton St. 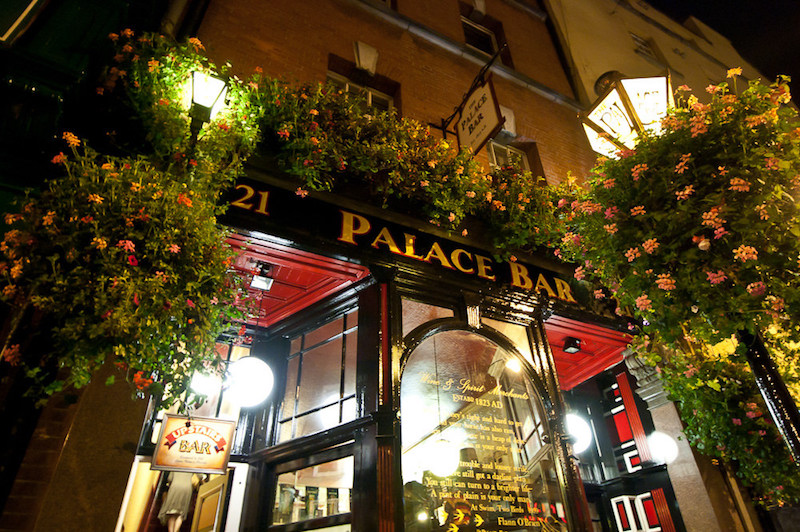 Built in 1823 and with its decor unchanged in the intervening period, The Palace is said to be the perfect example of an old Dublin pub. It is the most famous of the city’s literary drinking holes, with the novelists Brendan Behan, Flann O’Brien and Paddy Kavanagh all regulars in their day. The newsroom of the Irish Times is just three minutes’ walk away and The Palace has provided  ‘typewriter oil’ to the city’s journalists since the 1930s. It’s not all about the written word, however - it is also the unofficial headquarters of Tipperary’s hurling teams, and while singing is not allowed as it is a ‘conversation pub’ an exception is made for a Welsh choir who visits for Wales vs Ireland rugby matches. Situated in the cobbled streets of the Temple Bar area, The Palace offers a selection of over 100 Irish whiskeys including its own brand. 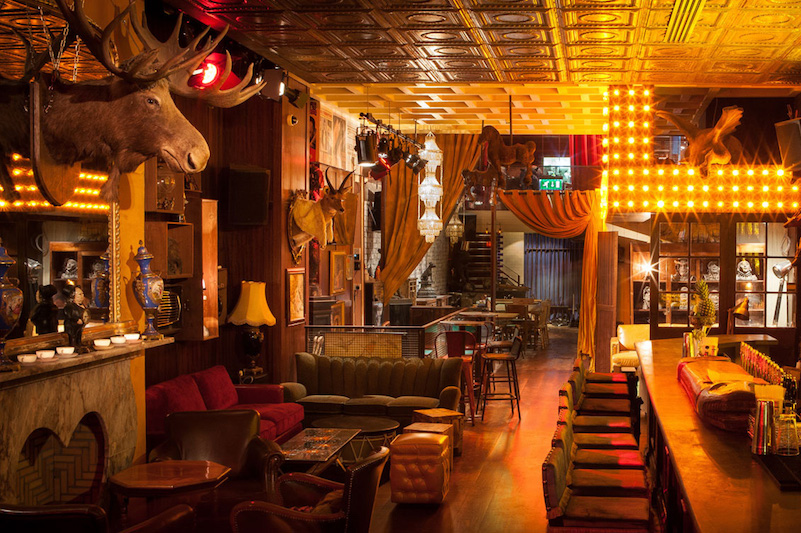 If you tire of all this tradition, try a bit of eclectic chic at 37 Dawson Street. Antiques, eye-catching art and bric-a-brac from zebra skins to vintage handbags adorn this trendy watering hole and eaterie. Seek out its numerous richly furnished corners, including a 1950s-style whiskey bar and an elegant restaurant serving brunches, lunches and dinners. Entertainment includes a DJ following Sunday brunch, cocktail making classes and whiskey tastings. 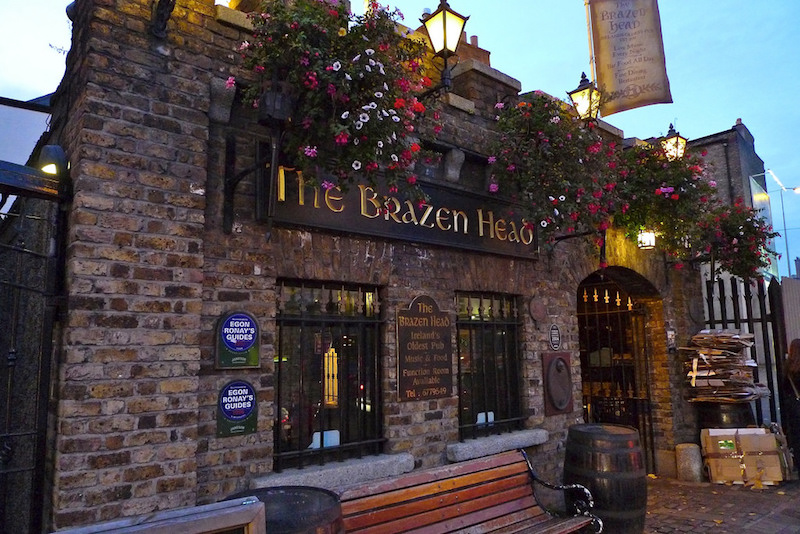 Set up as a Norman tavern in 1198, The Brazen Head is officially (according to its website) Dublin’s oldest pub. Rumour has it that the author of Gulliver’s Travels, Jonathan Swift, who was also Dean of nearby Christ Church Cathedral, made this spot his local. The famous Irish novelist, James Joyce, references The Brazen Head in Ulysses. It remains a convivial establishment to this day, with live traditional music every night and Irish folklore and storytelling evenings. The roll call famous names to have played there include Van Morrison, The Hothouse Flowers, and more recently Tom Jones at the Guinness 250th anniversary celebrations. Its menu covers everything from open sandwiches to hearty stews and seafood. The Brazen Head is a bit away from the city centre, but a short walk from top tourist attraction the Guinness Brewery. 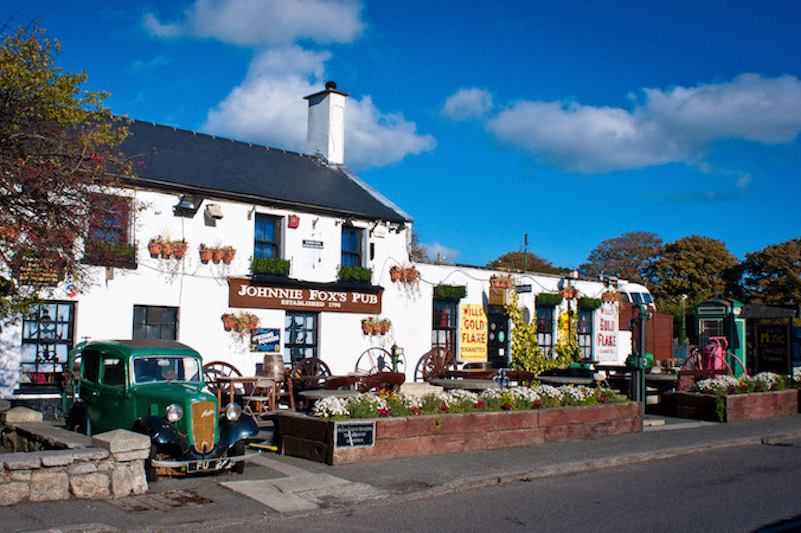 On the outskirts of the city in the pretty Dublin Mountains is the 200-year-old Johnnie Fox’s, famed as Ireland’s highest pub. Johnnie Fox’s is in the township of Glencullen about a half-hour drive from the city centre. The pub’s big drawcard is its Hooley Show, an evening of dinner, traditional music and a leg-kicking extravaganza performed by its own troupe of Irish dancers. The pub is also known for its award-winning seafood kitchen. It pays to book for the Hooley Show.