Following a move by the Fijian Government to hike departure tax effective 20 Jan 2012, Flight Centre has been inundated with changes for Kiwi Travellers. 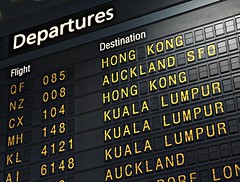 As the Fijian Government announced the increase of Fiji Departure Tax by an additional FJ$50 per person, with no warning, Flight Centre agents were preparing for an influx of customer changes over the next week.

Flight Centre’s executive general manager, Mike Friend said this increase, imposed by the Fijian Government, is unfair to travellers and predicts it will affect thousands of Kiwi travellers.

“To increase departure tax by this significant amount in itself is unfair, but to give such short notice is unacceptable,” Mr Friend said.

Mr Friend said he is disappointed by the decision and it makes Fiji a less attractive holiday destination.

As a result, all Flight Centre, Student Flights and Cruiseabout stores in New Zealand will give the customers the choice to transfer their deposits to other destinations, such as the Cook Islands, Tonga, Vanuatu, Hawaii, Niue, Bali or Thailand, to avoid paying this extra tax.

All travellers who have not paid in full as of 20 January 2012, will be affected and need to pay the extra FJ$50 per person, on their booking.