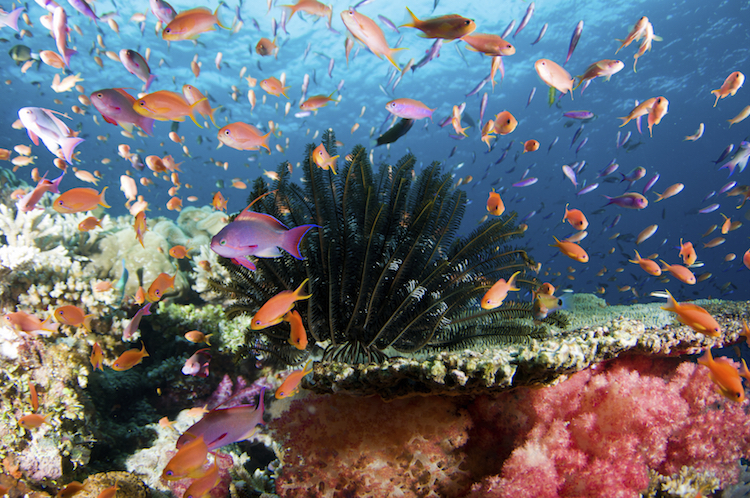 The South Pacific is full of great places to dive, but few can hold a candle to Fiji. The so-called “soft coral capital of the world” is home to a huge number of dive sites, all with a stunning array of jewel-coloured marine life. Fiji is a diving mecca largely thanks to the ocean currents that swirl around the islands, bringing vital nutrients to its underwater coral reefs. These currents can have their downsides: currents that are too strong can be hazardous for diving, while water that is completely still can cause coral polyps to close up and fish to disperse. Luckily, all dive operators are trained to judge the optimal conditions for you to enter the water.

And if you're not a diver, there are still tons of opportunities to strap on some fins. All over Fiji, coral outcrops known as bommies jut up near the water's surface, attracting butterfly fish, angelfish, anemones, reef sharks and more. The snorkelling is especially brilliant around the Mamanuca island group: try Matamanoa and Navini islands, where you can snorkel right from the beach.

The best visibility is in the winter months, but you'll enjoy the warmest water in the summer (though water temperature in Fiji is always relatively mild). You can experience the best of both worlds by visiting during the shoulder seasons of late spring or autumn.

BLIGH WATER AND THE KORO SEA

The bodies of water which separate Fiji's main island of Viti Levu from the smaller islands to the north attract experienced divers from all over the world. Because these seas are relatively large, many people choose to dive them from liveaboard ships, though it's also possible to dive from resorts on islands like Namena and Koro, and from the northwestern side of Viti Levu. In these waters you'll see vibrant soft coral, schools of psychedelic parrotfish, zebra-striped lionfish and blue and gold fusiliers. Don't-miss sites include the awe-inspiring Cathedral formation and the stunning Chimneys near Namena Island.

Fiji's third-largest island is the gateway to the Somosomo Strait, one of the world's greatest coral diving sites. The nutrient-packed waters that flow past Taveuni's western coast have created spectacular coral structures with names as colourful as the coral itself: Jerry's Jelly, Annie's Bommie, Cabbage Patch, The Zoo. The two most famous dive sites in the Somosomo Strait are the candy-coloured Rainbow Reef and the Great White Wall, a massive perpendicular wall of icicle-like soft coral.

Less than an hour by boat from the southern coast of Viti Levu, this unspoiled island and its lagoon are the remnants of a submerged extinct volcano. The traditional diving here is excellent, but Beqa is probably best known for its Shark Dive, which lets you swim, cage-free, with up to eight shark species, including giant Bull and Tiger sharks. It sounds insanely dangerous, but Beqa Adventure Divers know what they're doing. They've been running the unforgettable Shark Dive for more than a decade without incident.

This untouristy island is the jumping-off point for the 100km Great Astrolabe Reef, the 4th largest barrier reef in the world. The reef is incredibly rich in both coral and marine life, and it's also a wonderful place to see manta rays up close. Divers can join a trip to a manta ray “cleaning station”, where the giant creatures hover over the reef, allowing tiny cleaner fish to remove parasites and other organisms from their bodies. Because the reef is both close to land and near the surface of the water, Kadavu is a great place to snorkel, though the currents can sometimes be strong.

With their perfect white-sand beaches and upmarket resorts, the gorgeous Mamanucas are one of Fiji's most popular holiday destinations. No one would blame you for lazing under a palm tree, cocktail in hand, but if you're a diver you'll want to explore the brilliant diving on offer at locations all around this island group. Beginner divers may want to restrict their excursions to the shallow lagoon, while the more confident can explore the surrounding barrier reef. At sites like the Supermarket and Namotu Wall you'll see anemone gardens and schools of neon-coloured fusiliers, bannerfish and clown fish, plus barracudas, reef sharks and turtles.