It may not be as beautiful as Venice, or boast as many landmark attractions as Florence or Rome, but the historic city of Genoa has plenty of its own low-key delights.

For a long time, I dreamed of visiting Genoa. Something about this ancient city tucked into a corner of Italy near the French border intrigued me. Perhaps it was its naval history – the birthplace of Christopher Columbus, Genoa was once one of Italy's wealthiest maritime economies. Perhaps it was the city's medieval core, the largest and most densely populated in Europe. Or maybe it was just that I really really love basil pesto, and Genoa is where it was born.

Last year, I finally made it to Genoa. Here are five reasons I'd recommend the city to any visitor to Italy. Yes, you're probably going to get lost in the alleyways (in the local dialect caruggi) of Genoa's Centro Storico, or historical centre. But that's all part of the experience – Charles Dickens called Genoa “a beautiful confusion” after all – and should you lose your bearings completely, you can always just head downhill to get back to the waterfront. But if, like native son Christopher Columbus, you're an explorer at heart, Genoa's maze of alleyways is irresistible. Head down any one you choose and you're likely to pop out by a hidden square, a medieval church or a typically Genovese shop or cafe. For all the life it holds, the old city is remarkably peaceful. Most caruggi are too narrow for any vehicle except the occasional Vespa and, with Genoa still a largely undiscovered destination, it's highly unlikely that you'll run into a loud tour group – or, in some quieter areas, any tourists at all. Genoa's layout has been likened to a layered wedding cake – the crush of rust-coloured buildings on the city level, the pastel-hued hillside neighbourhoods above, and higher still, a strip of parkland greenery interspersed with the jutting towers of hilltop forts. From downtown, the vertiginous upper levels can seem inaccessible, but they're actually easy to reach thanks to the city's three funicular railways. Built in the 1890s, the Zecca-Righi line extends all the way to the top of the hills, ending at a high lookout at a gate in the 17th century city walls. There's a restaurant here, and a park where you can go hiking, but the real draw is the spectacular views of the city and port.

A bowl of pasta with real pesto is one of my favourite comfort foods, and for that I have Genoa to thank. Basil pesto's proper name is pesto alla Genovese, and it's a staple not only of Genoa, but the entire region. Almost every menu in the city serves pesto alla Genovese, always made with local Ligurian olive oil and usually served on short twisted pasta known as trofie. Another truly Genovese food is focaccia, which locals seem to eat morning, noon and night. Stop at any focacceria, point to the topping you like the look of, and dig in.

Thanks to the rocky terrain around Genoa, meat has never been a huge part of the locals' diet. Instead you'll find all kinds of fish, from meaty branzino to delicate dentici, or sea bream. After dinner, stop for a gelato at one of the city's many superb gelaterias. Profumo di Rosa in the Centro Storico is worth seeking out – Rosa, the owner, speaks perfect English and makes transportingly good gelato. I loved the mimosa-chocolate and the pistachio; you're guaranteed to find your own favourite.

4. The palaces of Via Garibaldi 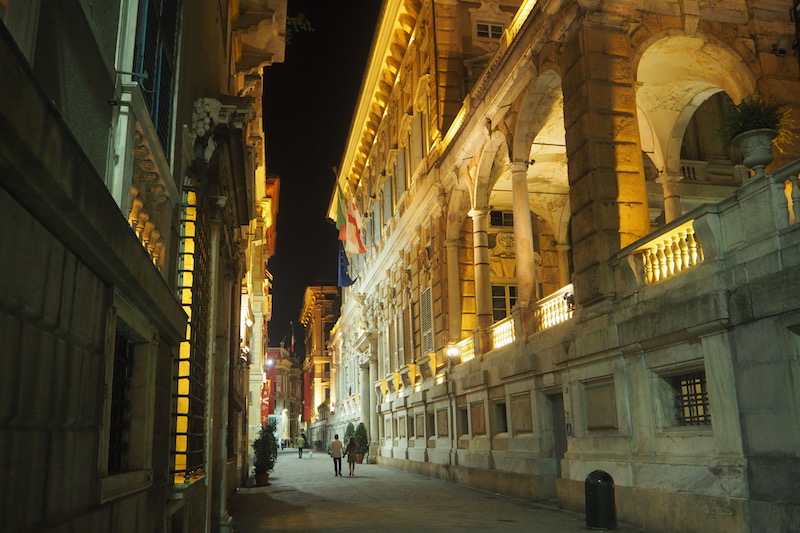 Emerging from the rabbit warren of the old city onto the elegant Via Garibaldi, you're pitched out of the Middle Ages and into the early Baroque period – the early to mid 16th century – when the palazzi (palaces) here were built. These are just some of Genoa's 42 Palazzi dei Rolli, private palaces that were specially chosen to host visiting aristocracy and papal entourages. The palaces were graded by degree of opulence: the most luxurious would be honoured with the presence of visiting emperors and popes, while the owners of less ostentatious homes would have to contend themselves with a duke or minor royal. Today three of the palazzi on Via Garibaldi are open to the public as art museums, exhibiting Old Master paintings, ceramics and sculpture.

5. The Italian Riviera and the Cinque Terre The seaside resorts near Genoa have been attracting tourists since the 19th century, and every summer the international jet setters still descend on places like Portofino and San Remo to see and be seen. You may not arrive by super yacht yourself, but getting there is a breeze if you're coming from Genoa. With a travel time of around 50 minutes, a day trip by train to Portofino makes perfect sense – especially when you consider the town's sky-high hotel prices. Another day trip option is the Cinque Terre, the string of fishing villages famous for their pastel-hued buildings stuck precariously to steeply jutting cliffs. The closest of the five villages, Monterosso, is just over an hour from Genoa by train. But for the full Cinque Terre experience – including walking some of the spectacular cliffside trails – plan to stay at least a couple of days.
Italy Europe