How to climb Mt Fuji

For a few months every year, Japan's iconic mountain is open to anyone with the desire – and stamina – to climb it. Joseph Harper explains how he hiked through the night to catch the sunrise from the summit.

Almost every guidebook and blog says summer is the worst season to visit Japan. July and August are so swelteringly hot, the cool new sneakers you just bought at ABC Mart will probably melt into the sidewalk. There’s only one reason I decided to ignore all advice and visit Japan in the summertime: climbing Mt Fuji.

For a few months, starting in July, the Japanese authorities open the trails that wind up the nation’s iconic cone. Mt Fuji stands at 3776 metres (taller than Mt Cook!) and I decided it would be fun to stand on top of it. 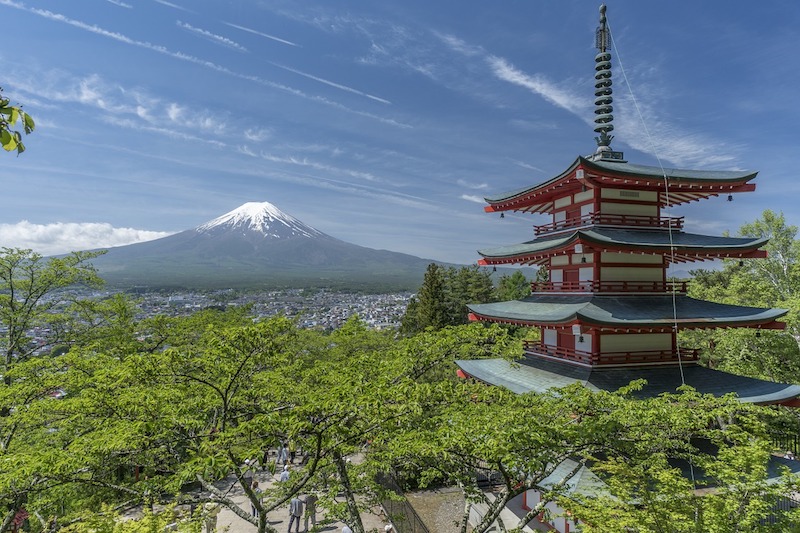 I went with a friend. Our plan was to start hiking after sundown and try to time our arrival at the summit with the sunrise. I was reasonably well prepared with warm gear, some extremely sensible shoes and a windproof jacket. My friend decided sneakers and a t-shirt would be acceptable.

To get to the start of the Yoshida trail, the main track up Fuji, we took a bus from Shinjuku station in Tokyo for ¥2700 (around $35 NZ). The trip was just over two hours. As we started rolling up through the clouds, the occasional deer popped out from the forest to wish my fellow climbers and I luck.

Our bus let us off at Fuji Subaru station, a little village about halfway up the Yoshida trail. There were a few restaurants and souvenir shops as well as shops stocking walking sticks and other climbing apparel. I had felt a bit silly in my long-johns and thick socks, but once we arrived at our ‘base camp’ I was glad for them, and convinced my companion to splash out on a jacket from one of the local shops. We had a katsu dinner while we waited for the sun to go down, then we loaded water bottles into our backpacks and hit the trail. 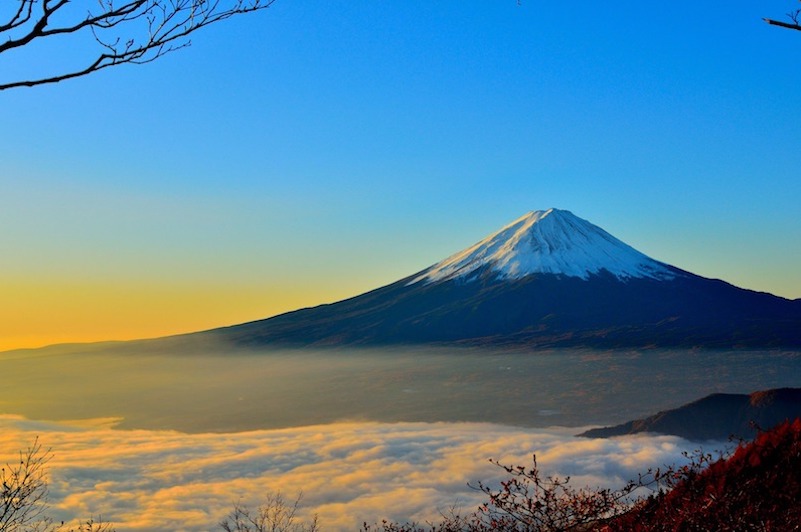 The trail was very easy to follow. A mixture of gravelly dirt and bigger rocks to hop across, everything well signposted. As it got darker though, we needed to turn on our headlamps to guide the way. It was pretty stunning. Whenever the clouds beneath us parted, we could look down at the towns and cities stretching out to infinity. Above us we could see a glittering path of huts and fellow climbers, snaking up to Fuji’s famous crater, all watched over by a huge, smiling moon.

Up the mountain, there are “stations”. Each station, separated by several hundred metres of track, has huts which you can reserve bunks in. Accommodation is pricey, but it’s probably worth it if you want to catch the sunrise but don’t feel like trekking through the night. The stations also sell food and drinks at heavily inflated prices. The higher you get, the colder it is. The night I climbed, it was incredibly windy and we were more than willing to spend up big on an overpriced cup of tea because it meant we could sit in the relative warmth of one of the huts for fifteen minutes. 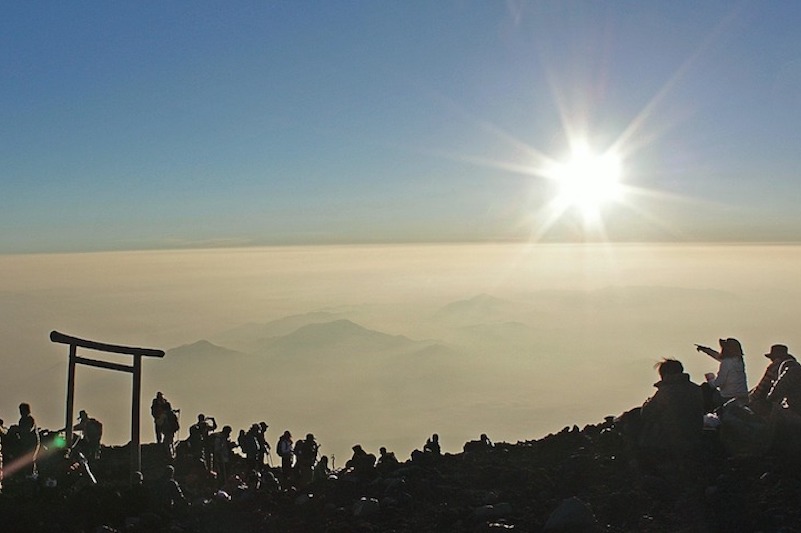 Climbers on the summit of Mt Fuji. Photo: Pixabay

By the time we arrived at station 8.5, we realised that we were climbing way too fast and would arrive at the summit well before sunrise. We were also freezing cold. The only other people at the station were asleep in a hut, so we made the executive decision to sneak inside and hold up until we got kicked out. We cramped ourselves silently into a little alcove had a nap on the floor. After about an hour, people’s alarms started going off and one of the guides who was in charge of the hut woke up and discovered us, huddled like rats stowed away in the corner. He was pretty grumpy, but after a few well-placed gomenasai's ('sorries'), he seemed to forgive us.

We headed back out into the night. I gave my friend a spare pair of socks to chuck his hands into and chatted to an elderly Hawaiian couple who were travelling the world, climbing mountains. From there, the track got a lot rockier, but was still easily manageable. 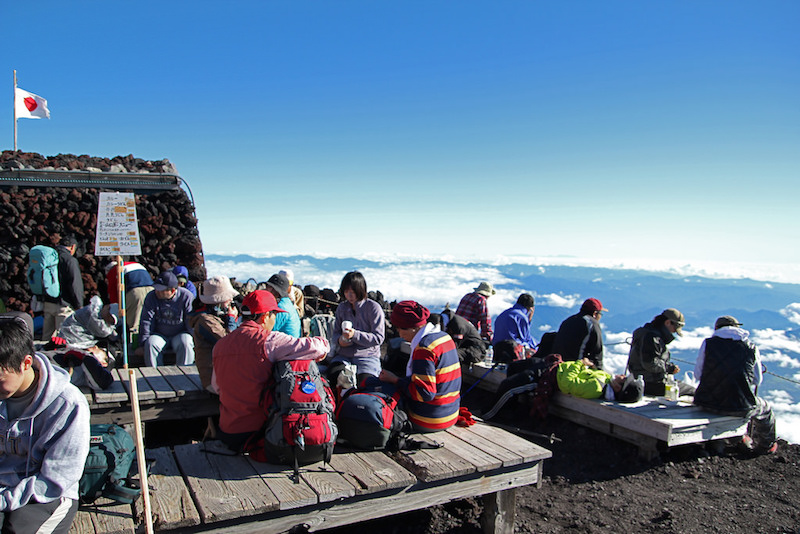 As we neared the summit, we started passing under traditional torii gates, all beaten naked by the weather, their cracks stuffed with offerings of coins. We arrived at the top before daybreak and waited for the sun to rise while all down the trail a stream of pilgrims waddled up against the wind. I sat down on the edge of a piece of wood and laughed along with a young couple who tried to tell me the Japanese word for something like awe.

The sun came up and it was glorious. I could barely feel my fingers but I just wanted to sit there for as long as it took the big red orb to conquer the sky. On the summit, at the very highest point, there’s a lonely old torii gate that seems to be barely standing up. The wind whips at it with incredible force. I fought my way up to it and squeezed a ¥1 coin into its crowded crevices as water was ripped from my squinting eyes. It was a wonderful sense of accomplishment. 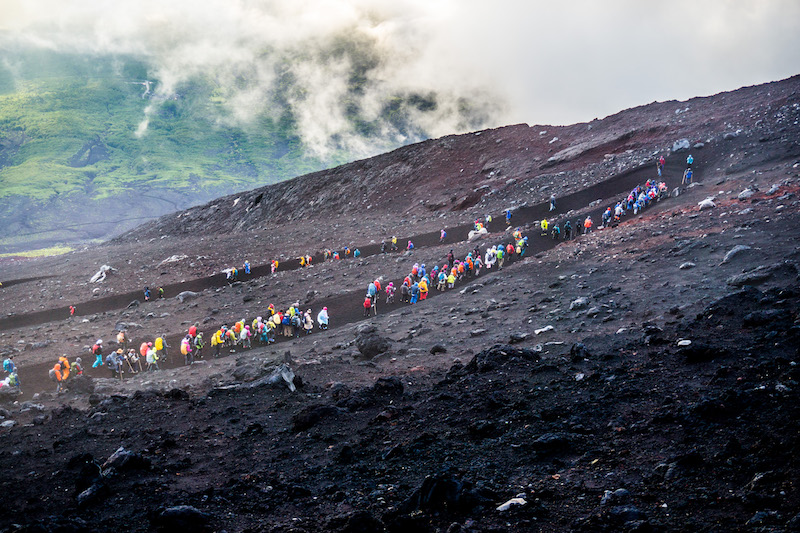 Apart from the view, the road down was boring. Just endless, ambling scree. We were exhausted, but I tried to make the journey more enjoyable by skittering down in great strides like a goat. I fell over a couple times. When we got back to Fuji Subaru station, we had a few hours to kill so we noodled around the shops. I sent my parents a postcard and had a lovely ice cream for breakfast.

Then when our bus arrived, we climbed aboard and promptly fell asleep.