London: The 10 Best Things to Do on the River Thames

Whether you're a fan of historic treasures like the Tower of London and Hampton Court Palace, or prefer the London Eye, the Shard and other modern marvels, the Thames should be the focal point of every London visit. Below, a guide to the river's best tours, attractions, pubs and restaurants. 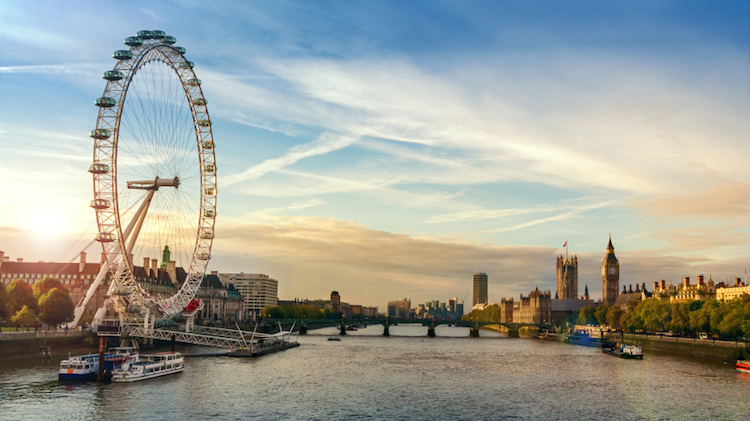 The River Thames, including the London Eye, Westminster Bridge, the Houses of Parliament and Big Ben. Credit: iStock.com

Whether you're embarking on a mammoth multi-day trek (be warned - the Thames Path stretches 294 km in its entirety, from the Cotswalds to the sea) or a short and scenic stroll, you'll find some of Britain's best walking along the River Thames. In need of inspiration? Try these three great riverside walks:

- London Bridge to Blackfriars, past Borough Market, Shakespeare's Globe and the Southbank Centre.
- Through Battersea Park and then across Albert Bridge to the 442-year old Chelsea Physic Garden.
- Around Kew Gardens and on to historic Richmond, home to Richmond Palace, where Queen Elizabeth died in 1603. 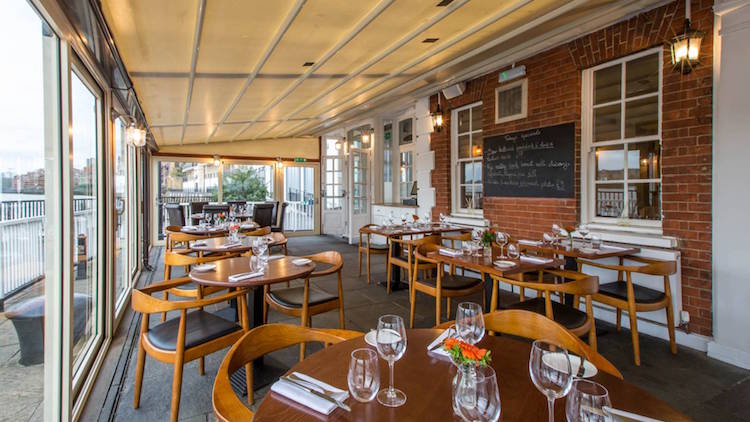 2. Eat and drink on the river

One of the best ways to appreciate the River Thames is accompanied by a glass of wine and something good to nibble on. Luckily enough, many of London's most exciting restaurants and bars have Thames views, including the the Tower of London's Perkin Reveller (named after the cook's apprentice in The Canterbury Tales), the buzzy Oxo Tower, and the high-end French restaurant Le Pont de la Tour. After something more casual? Try a riverside pub. There are too many to mention here, but favourites include The Dove in Hammersmith, The Ship in Wandsworth, The Anchor on Bankside and The Narrow, Gordon Ramsay's East London gastropub.

Take a walk by the Thames and you can't avoid tripping over many of London's most beloved cultural treasures. On the river's northern shores you'll find Tate Britain, Somerset House and the Museum of London Docklands; on the South Bank there's Tate Modern, Shakespeare's Globe and the Design Museum. And that's not to mention the theatres, galleries and restaurants which make up the Southbank Centre, one of the largest arts centres in the world. 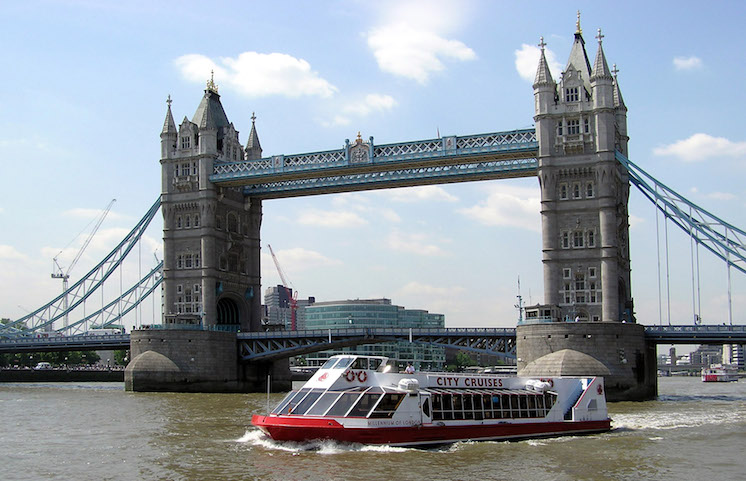 Many visitors are content to admire it from afar, but for the most authentic Thames experience you really need to take to the water. Choose from a huge number of cruises and tours, from speedboat thrills to hop-on, hop-off services. Prefer to stay dry? How about a nighttime bike tour or guided 'mudlarking' exploration of the foreshore, where – if you're lucky – you might dig up a Roman coin, medieval roof tile or Elizebethan clay pipe. 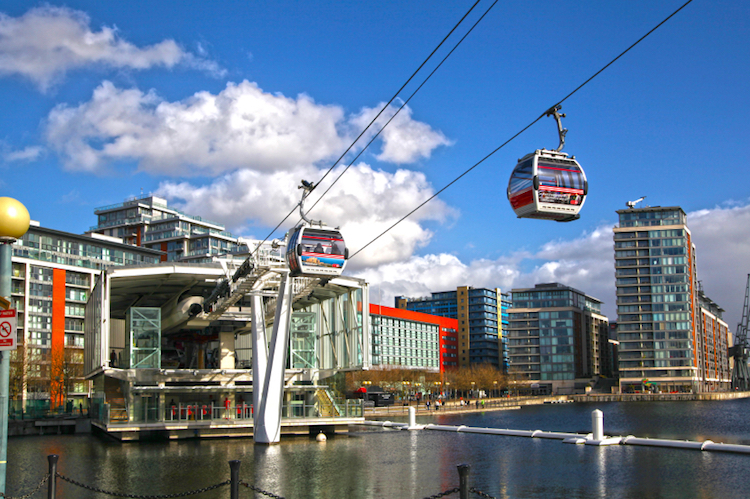 5. See the river from above

To get the full effect of this most magnificent of rivers, you'll have to go up. Way up. The 135m London Eye ferris wheel is the river's best-known aerial view, but there are plenty of other ways to see the Thames from on high. One of the best is the Emirates Air Line, a cable car link across the river at Greenwich, gateway to attractions like the Royal Observatory and the Thames Barrier. To reach the Air Line, go by Underground to North Greenwich station, or take the Thames Clipper river bus service.

Other brilliant places to view the Thames from above include The View from the Shard, the viewing platform on Western Europe's highest building, and (for thrill-seekers only) Up at the O2, a harnassed walkway over the roof of the old Millenium Dome. 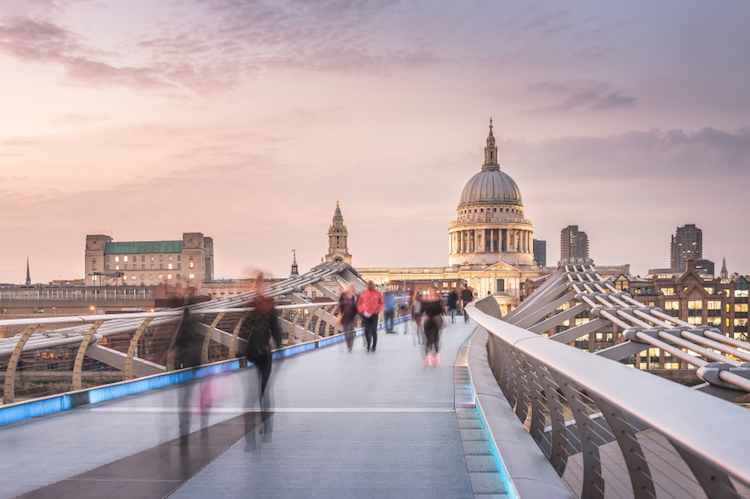 Every one of London's Thames bridges has its own special history and unique view of the river beyond. Two not to miss are London Bridge, a modern bridge over an ancient river crossing, and Tower Bridge, an instantly recognisable symbol of the city. Be sure to visit the Tower Bridge Exhibition, which gives you access to the bridge's towers and high walkways. Once you've ticked those off your list, check out Hungerford Bridge, offering one of the best river views in London; the once-wobbly Millenium Bridge, which connects St Paul's Cathedral with the Tate Modern; and the cable-stayed Albert Bridge, decorated with 4000 L.E.D. bulbs – one of London's most beautiful nighttime sights. 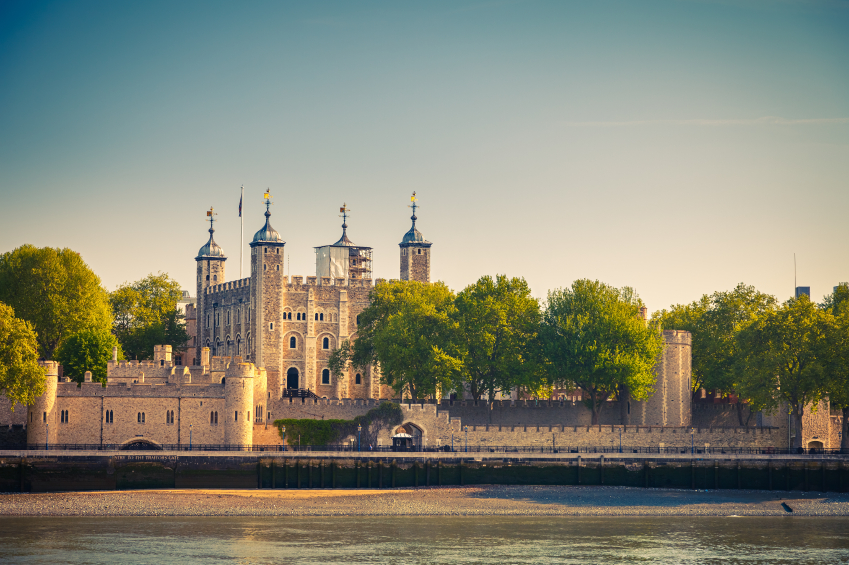 The Tower of London. Credit: iStock.com

Having been the centre of London life for thousands of years, the Thames is today home to many of the city's most important landmarks and historic places. You already know about the Tower of London, of course, but how about the Royal Museums Greenwich, Hampton Court Palace, the Houses of Parliament and the Clink Prison Museum? From paupers' jail cells to royal residences, the river has played host to them all.

8. Join an event or festival

The Thames is the stage for a number of hugely popular free events, most famously The Boat Race, the late-March Oxford vs. Cambridge rowing race on the stretch of the river between Putney and Chiswick Bridges. The Boat Race is for top athletes, but anyone can enter September's Great River Race, a 35km rowing regatta which bills itself as “London's River Marathon”. September is also when the month-long river festival Totally Thames takes place. And if you're in London on April 23-24 this year, be sure to visit the Southbank for The Complete Walk, a series of 37 short films starring Peter Capaldi, Dominic West, Hayley Atwell and more, in celebration of the 400th anniversary of Shakespeare's birth. 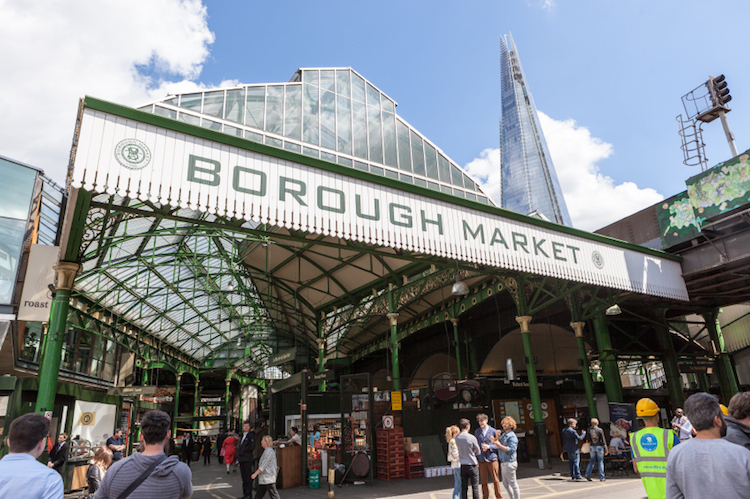 London is a city full of historic markets, and some of the best are a stone's throw from the Thames. Borough Market is the city's premier foodie destination, a cornucopia of fresh produce and gourmet treats, plus bars, cafes and restaurants. Greenwich Market has been in near-continuous operation since 1737, and moved to its current location next to the Old Royal Navy College in the early 1800s. And the magnificent Hays Galleria, a former wharf building, is now an upscale complex of restaurants, bars and retail boutiques. It's an ideal stop on a Thames Path walk from Tower Bridge to Borough Market.

10. Be inspired by movies, books and music

The Thames has been the backdrop for plenty of movie moments, but few more memorable than James Bond's six-minute river chase in The World is Not Enough, which began at MI6 HQ in Vauxhall and passed Westminster and the Royal Docks before culimating at the O2 Arena in Greenwich. In Harry Potter and the Order of the Phoenix, the gang fly their broomsticks past the HMS Belfast and Tower Bridge; in its sequel, the Half-Blood Prince, the Millenium Bridge is destroyed by an Death Eater attack.

The river features prominently in novels by Charles Dickens (particularly Our Mutual Friend and Oliver Twist), the Sherlock Holmes books by Arthur Conan Doyle, and Joseph Conrad's classic Heart of Darkness. As for music, the river is the setting for one of the greatest pop singles of all time – The Kinks' “Waterloo Sunset” – and takes a starring role in The Pogues' lovely “Misty Morning Albert Bridge”.