New York: How to do Brooklyn in one day

There's a huge amount to see and do (and eat) in Brooklyn, but visitors to New York rarely have enough time to make the most of this exciting part of the city. Here's how to fit Brooklyn's greatest hits into one very fun day.

Weird but true, the best thing about visiting Brooklyn as a tourist is that it's pretty short on tourist attractions. Yes, you want to walk across the Brooklyn Bridge and catch the view of the Manhattan skyline from across the East River, but there aren't actually many other can't-miss sights. Which is great, because it means more time for wandering and soaking up the vibe in New York's coolest borough.

But just because you don't have a huge number of attractions to tick off your list doesn't mean you should go to Brooklyn without a plan. Why? Because Brooklyn is enormous. If Brooklyn was a separate city, it would be the third biggest in the United States (after Los Angeles and Chicago). But though you'll only see a tiny fraction of the place, if you stick close to the river – with a single detour into downtown – a 'best of Brooklyn' tour is surprisingly easy to do in just one day. 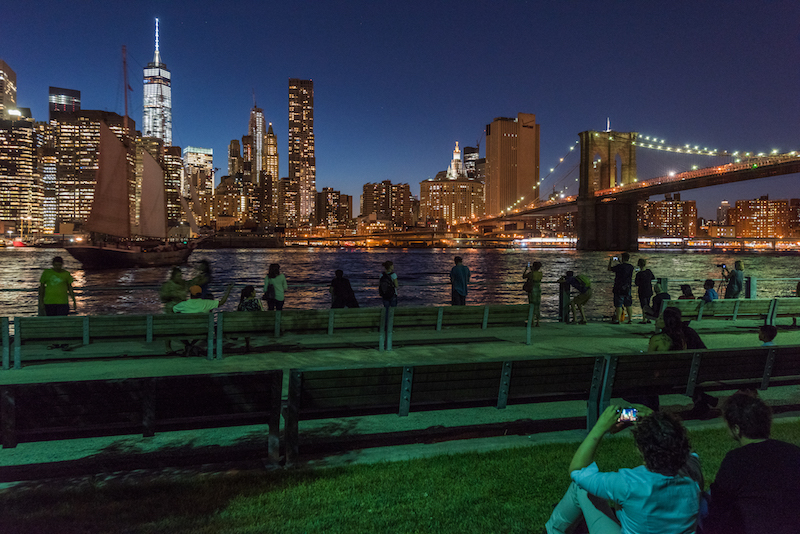 One more note before we start: this itinerary is one that works as well in reverse: You'll have just as wonderful a day if you start with brunch in Williamsburg (I love the quiet and cool Marlow & Sons, and the gorgeous vegetation-covered 'plant room' at Juliette); head south to Dumbo for a walk along the waterfront and pizza at Grimaldi's or Juliana's; and finish up with a sunset stroll over the Brooklyn Bridge and back into Manhattan. 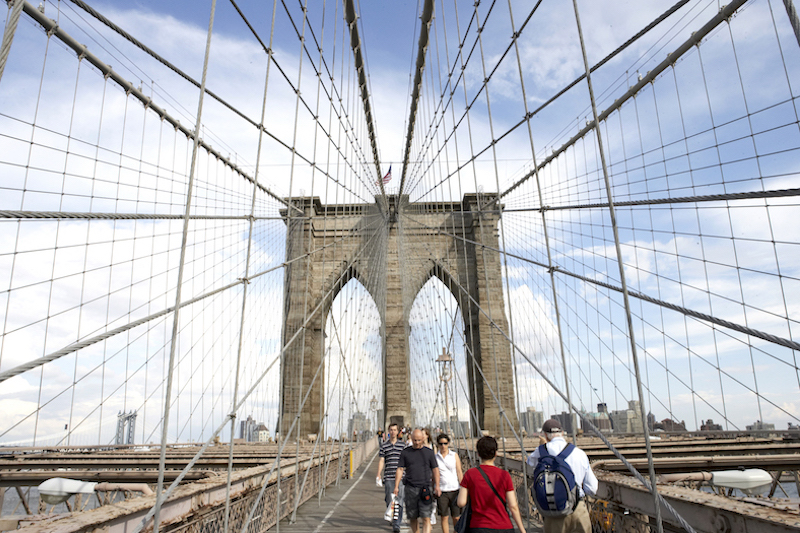 If you're in New York during summer, the earlier you arrive at Manhattan's City Hall entrance to the Brooklyn Bridge, the better. From mid-morning the Manhattan side quickly becomes snarled with slow-walking tourists, all of whom seem intent on stopping for group selfies at every opportunity. But when the views are this spectacular, who can blame them? Follow their lead and remember to regularly pause, turn around, and take in the awe-inspiring Manhattan skyline in all its glory. 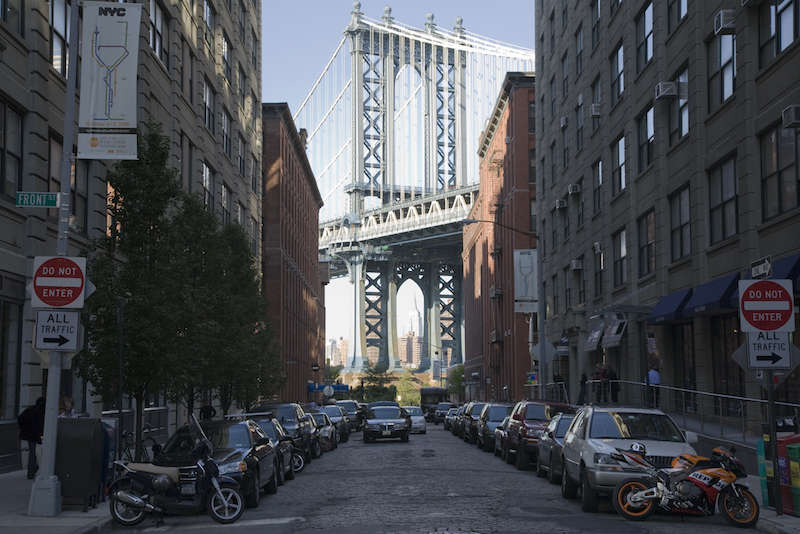 DUMBO with Brooklyn Bridge in the background. Photo: Phil Kline/NYC and Company

When you reach the Brooklyn side, double back and walk towards the river, into the neighbourhood known as DUMBO (the name stands for “down under the Manhattan Bridge Overpass”). Despite the weird name, this is one of Brooklyn's most historic districts, its vast 19th century shipping warehouses now home to cool design stores, fashionable restaurants and some very lucky (and wealthy) apartment owners. While you're there, stop for coffee and a pastry at Brooklyn Roasting Company and browse the treasures, vintage and brand new, at the wonderfully eclectic Front General Store. 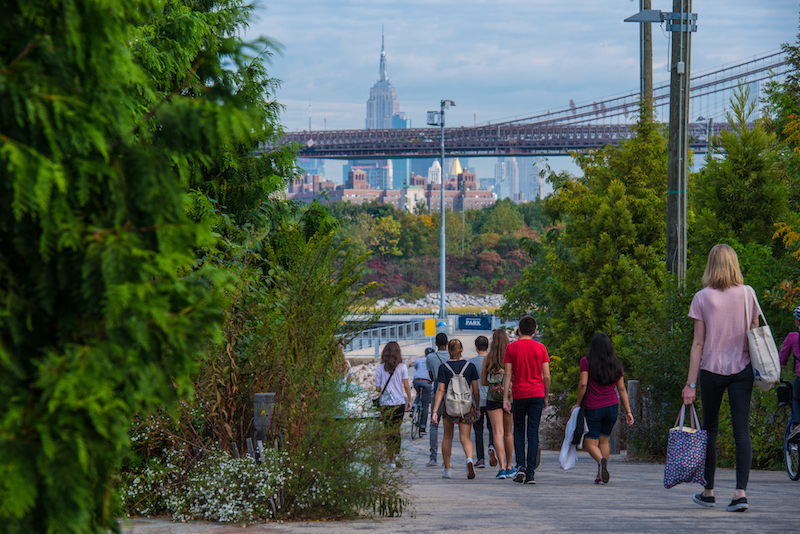 Brooklyn Bridge Park runs for more than two kilometres along the waterfront, but the section around the bridge itself is the most popular with visitors and locals alike. From DUMBO, start walking south and you'll pass a head-spinning number of attractions and activities – basketball courts, tennis courts, sand volleyball courts, an in-line skating rink, playgrounds, wild flower meadows and more – many of them built on old industrial piers.

Time to move on. Head back towards DUMBO and take the subway from Clark St towards  Prospect Park, the borough's vast and beloved public park. You have two choices here: the first is to get off the subway at the Grand Army Plaza station and head into the park itself – on your way in, check out the amazing gold-decorated doors of the Brooklyn Public Library and buy a freshly squeezed juice from one of the food trucks near the park's main entrance. Prospect Park has the feel of a more peaceful, less touristy Central Park – which makes sense, as both parks were designed by the same duo in the mid 1800s. 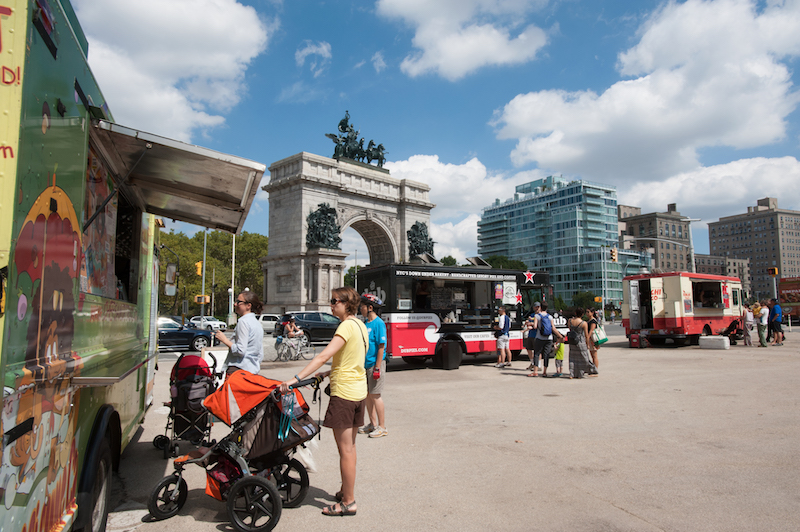 If you've had enough of parks for now, stay on the train for one more stop and you'll emerge outside the Brooklyn Museum. No piddling outer suburb museum this, Brooklyn Museum is the third largest in New York and home to around 1.5 million antiquities and works of art. You could easily spend the best part of a day here, but even if you see only a small part of the collection, it's well worth the visit. Bonus: its cool marble interior is a blessed relief on a stinking hot New York summer's day. By now you'll be ready for a late lunch. Good options in the vicinity of the museum include Tom's, a classic diner-style eatery that's been serving customers since 1936; acclaimed pizza restaurant Barboncino; and nostalgia-heavy hamburger joint Dutch Boy Burger. After lunch, it's time to head north – a long way north (remember what I said about Brooklyn being bigger than you think?), to Williamsburg. You could do it by subway, but be prepared for a long and annoying journey, including an unavoidable five-minute walk between stations halfway through. Unless you're on a strict budget, I recommend splashing out on an Uber. It'll be worth it. 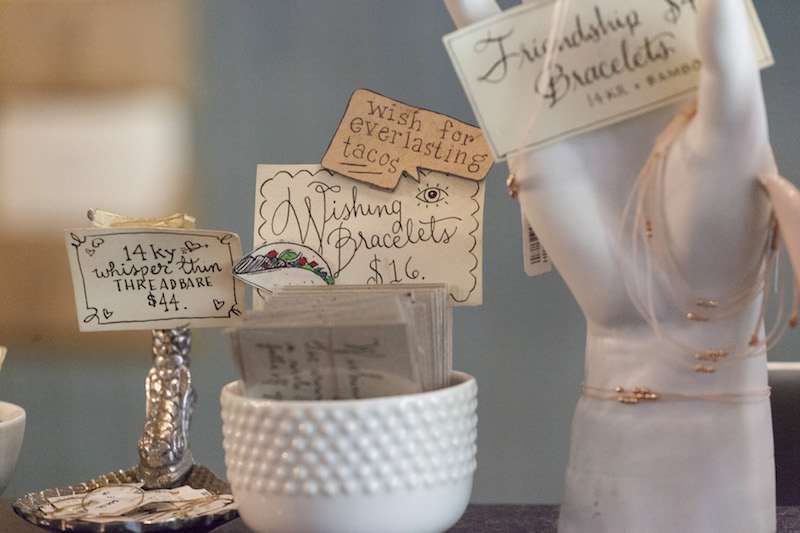 Ask to get out on Bedford Avenue, Williamsburg's main strip. Your destination is... nowhere in particular. The appeal of Williamsburg is the place itself: a super-hip district full of fashionable bars, cool restaurants and beautiful things to buy. It's easy to lose a few hours here window-shopping – don't miss indie clothing boutique Bird Brooklyn, jewellery store Catbird and weekend-only indoor market Artists & Fleas – but if you're not in the mood to spend, the quirky NYC community history museum City Reliquary on Metropolitan Avenue is a great alternative. 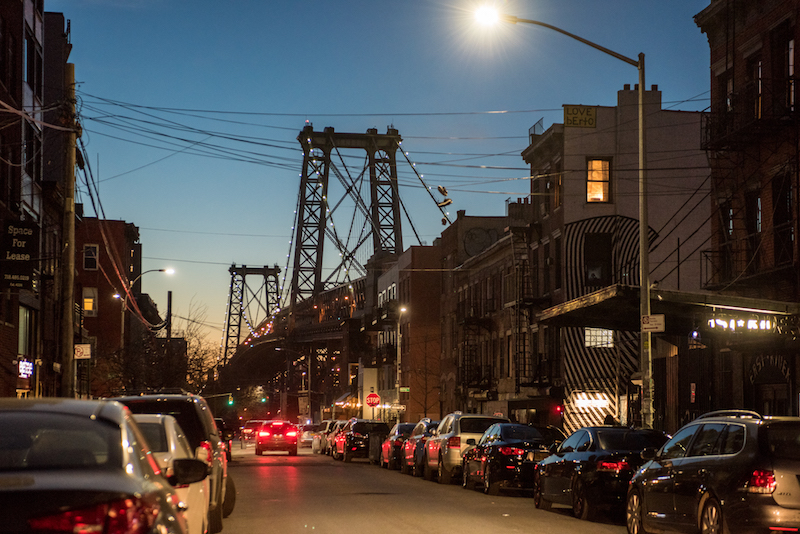 As day turns into evening, Williamsburg locals head to their favourite watering holes, from grungy dive bars to glamorous cocktail lounges. Follow the cool kids to the hugely popular Union Pool (or come back later when the music gets loud and the party gets rowdy), kick back in the wonderfully atmospheric Loosie Rouge, or check out some newly-trendy natural wines (those made with minimal chemical intervention) at The Four Horsemen, where they also do excellent bar food. For a more substantial dinner, your choices run from the cheap and cheerful – Vanessa's is great for dumplings – to 'push the boat out' fancy. Try the fantastic Meadowsweet near the waterfront – their US$85 five-course tasting menu is a steal for New York – or the widely praised Reynard in the Wythe Hotel, where you can finish your night with a cocktail and a million-dollar Manhattan skyline view at the rooftop bar, The Ides.