On the road with the Kiwis - part two

In part two of our Rugby League series, Sports Journalist and Producer, George Berry is in Warrington to witness the opening test match of the Four Nations 2011 series.

Warrington itself is a town in the UK halfway between Manchester and Liverpool that offers visitors everything from shopping to beautiful parks and gardens. If you enjoy the outdoors and destinations with a strong history, this town would be perfect when on your next trip to the UK. Marvel at the historical sites and architecture throughout the Cultural Quarter, take a rowboat ferry trip across the Manchester Ship Canal, visit the Warrington Museum & Art Gallery or take a leisurely stroll along the many village and canal walks.

Here’s George Berry's update of the opening match in Warrington for Flight Centre.

The Kiwis may have lost their opening Four Nations clash against Australia 26-12 in Warrington, but what the score line doesn’t show is the steely resolve the side showed especially in the second half to get themselves back in the contest.

After leaking a try in the opening 46 seconds, New Zealand wrestled the match back from the brink of what was on the cards of becoming another forgettable night, especially with the scoreboard heavily weighted in the Kangaroos favour at 16 points to nil at the half time break. 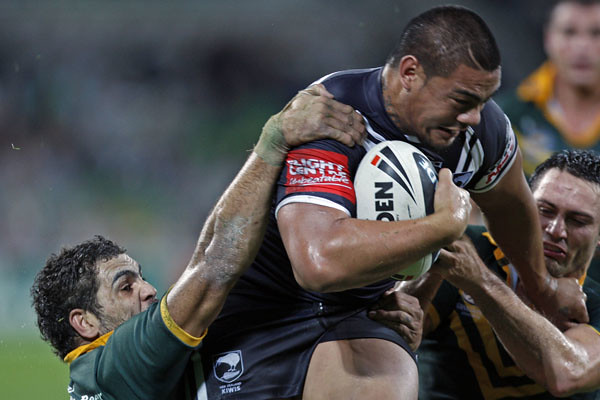 Benji Marshall and his troops emerged from the sheds with a look of nothing to loose, a move that for the next 30 odd minutes had every one of the 13,000 fans packed into the Halliwell Jones stadium sitting on the edge of their seat.

With tries to Wingers Jason Nightingale and Kalifa FaiFai Loa backed by Skipper Marshall slotting both conversions, New Zealand were given a fighting chance at 16-12.

Australia piled on two late tries to put the result beyond doubt, but anyone keen to see New Zealand defend their Four Nations title won’t be feeling too uncomfortable with the result.