Divine pastries, booze with a kick, immigrant flavours, and fish, fish and more fish: welcome to the unique tastes of Portugal.

It’s a bit odd for a country with such abundant and delicious fresh seafood to go so crazy for preserving it, but if you know about Portugal’s proud seafaring history – a time when food had to last weeks, if not months, onboard – it makes a lot more sense. The most famous Portuguese preserved fish is bacalhau, or salt cod. Towers of stiff, kite-shaped fillets of bacalhau are a common sight in grocery stores and supermarkets; only after being soaked in water for a couple of days is it ready to cook with. Bacalhau can be an acquired taste, so start simply with the widely eaten snack bolinhos de bacalhau, croquettes made from potato and cod.

The Portuguese are also keen devourers of canned fish, a surprisingly popular bar snack usually served with a hunk of cornbread to mop up the juices. A tin of sardines and a Sagres beer is an only-in-Portugal experience, but for many visitors it’s the colourful vintage-style tins that are the real draw. Buy these wallet-friendly keepsakes at historic canned fish emporium Conserveira De Lisboa in central Lisbon, or at the stylish souvenir and gift shop A Vida Portuguesa (branches in Lisbon and Porto). 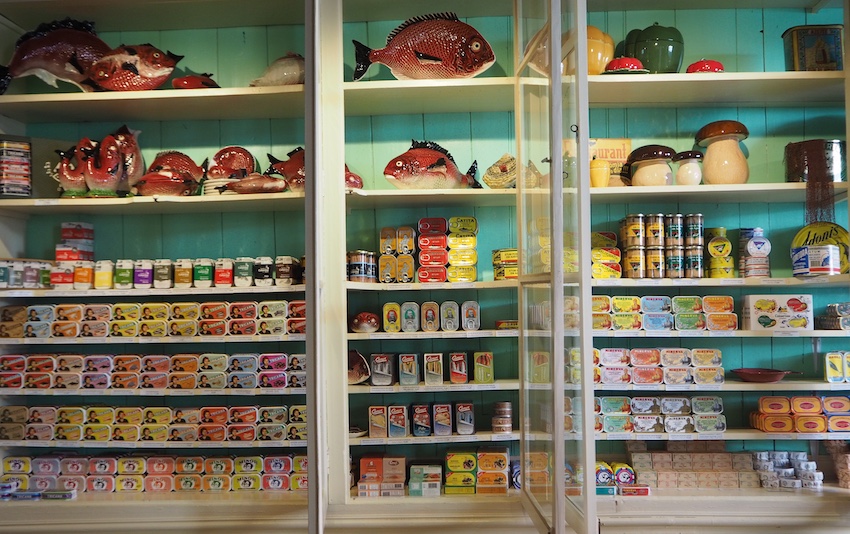 In New Zealand, sweet liquor means the bottle that sits at the back of the cupboard and comes out once a year at Christmas. Not so in Portugal. Ginjinha, or ginja for short, is a sweet liquor made from Morello cherries that’s drunk everywhere and by people of all ages. It’s particularly popular in Lisbon, where a number of ginja-only bars are city landmarks; the king of them all, A Ginjinha Espinheira, has been at its downtown location since 1840. Ginjinha can be served with or without a sour cherry at the bottom of the glass; arm yourself the Portuguese words con (with) and sem (without) before you approach the bar. A speciality of the town of Óbidos in central Portugal is ginjinha served inside a chocolate cup – just as sweet and sticky an experience as it sounds. If your itinerary doesn’t include Óbidos itself, you can have your ginjinha Óbidos-style at the Ginja de Óbidos bar outside the Time Out food hall near the Lisbon waterfront. 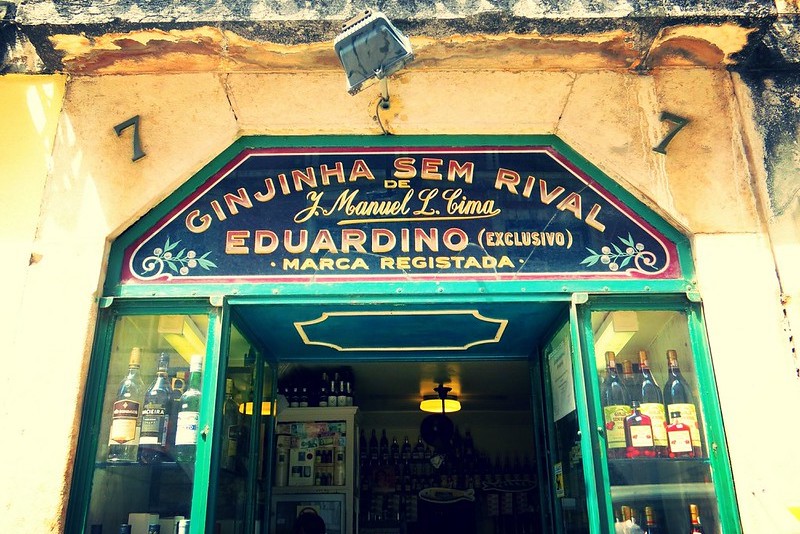 The sign above the door at Lisbon ginja bar Ginjinha Sem Rival (Ginjinha Without Rival). Photo: Edna Winti / CC BY 2.0

Pastel del nata and cakes of all kinds

Forget France and Italy: some of the most delicious baked goods in all of Europe are made in Portugal. Wander into any pastelaria, or pastry shop, and you'll find glass counters groaning with sweet treats like pão de Deus, a sweet bread filled with coconut paste, or malassadas, doughnut-like pastries dipped in sugar. The most famous Portuguese pastries are pastel del nata, the rich custard tart first made by nuns from the Jerónimos Monastery in Belém, Lisbon. Since 1837, the tarts made at Pastéis de Belém have followed that same recipe, and the west Lisbon bakery remains by far the best-known purveyor of pastel del nata in the entire country. A trip there to buy a boxful – always still warm from the oven, such is the turnover at this hugely popular spot – is an absolute must. 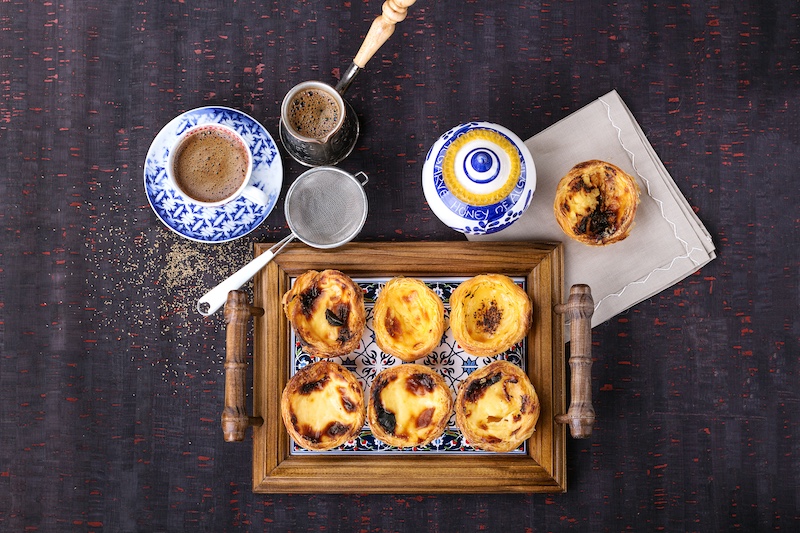 Port and wine in the Douro Valley

Cold wine, warm sunshine and a river view: there are few better ways to savour a summer’s day. The Douro Valley, running from the city of Porto east towards Spain, has been a centre of winemaking since before the Romans arrived, and it remains a lovely place for a lazy wine-filled week. Short of time? A wine cruise from Porto will give you a taste of this beautiful region while still having you back at your hotel by evening. While in Porto, spend a day exploring the port houses on the river’s south bank. Even if you’re not a fan of port, you’ll be enthralled by the history of these unique wineries, most of them hundreds of years old. Don’t miss Graham’s Port Lodge, set high on a hill overlooking the Douro River – the views from the restaurant deck make it the ideal spot for a leisurely al fresco lunch. 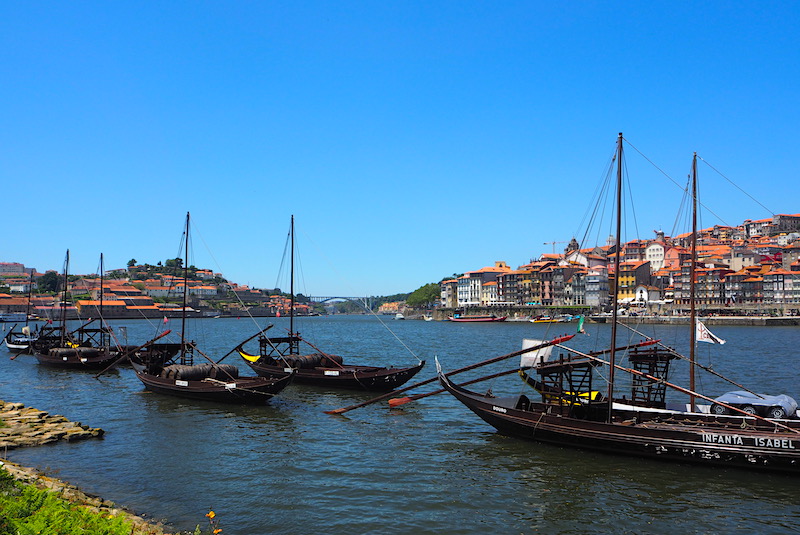 Lisbon is home to a thriving immigrant community from Goa, a province of southern India that was once Portuguese territory, and the city’s restaurants serve some of the best Goan food outside of India. Thanks to its location on India’s tropical south coast, Goa’s cuisine is heavy on seafood, coconut and mango; the long Portuguese occupation, meanwhile, introduced ingredients like pork sausage and vinegar, both rarely eaten elsewhere in India. Zuari and Delícias de Goa are two of Lisbon’s most traditional Goan restaurants, and either is worth a visit if you’re craving a curry. Be careful though – Goan food can be very spicy!

It’s a sign of how much the Portuguese love food that so many of their festivals revolve around it. You’ll eat well at any small-town festival – and, being a Catholic country, there are a lot of those in Portugal – but a food-centric festival will take your snacking to a whole new level. The medieval town of Óbidos hosts the Óbidos Chocolate Festival in March: 10 days dedicated to all aspects of the cocoa arts, including free tastings galore. In Lisbon, the Feast of St. Anthony each June truly is a feast, a massive block party dedicated to the grilling and devouring of sardines fresh from the ocean. Eat them as the locals do: like a corn cob, the sardine’s head in one hand and the tail in the other. (There’s also a famous sardine festival each August in Portimão, on the Algarve coast). Later in the year is St Martin’s Day, marked with chestnut dishes and wine to welcome the autumn; northern regions like Trás-os-Montes and Beira have the most traditional celebrations.

Another good way to learn about the cultural underpinnings of Portugal’s cuisine is on a food tour or cooking class. Whether it’s a few hours visiting artisan producers in Lisbon, a cooking class in the Algarve, or a week-long guided trip with a culinary focus, a hands-on Portuguese food experience is the ideal way to learn the history and meaning of the foods the locals love to eat. 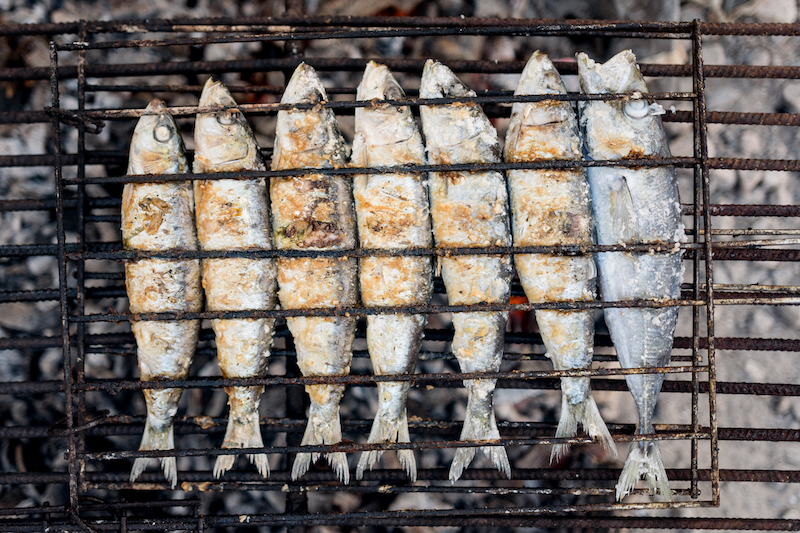