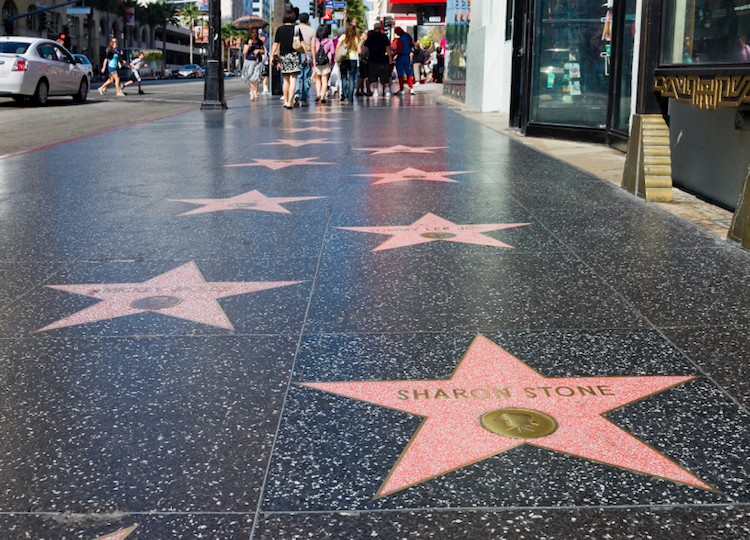 As a die-hard long-time fan of all things film, television and Hollywood, the opportunity to stay for a few days in the star-studded hub of Los Angeles was an exciting one. I immediately envisioned myself sipping champagne with Brad Pitt, going shopping with one of the second-tier Kardashians and probably winning an honorary Oscar just for being there.

None of this happened, but I still feel like I managed to see and do a lot without becoming bankrupt and descending into madness like Norma Desmond in Sunset Boulevard. If you're a fan of the rich and famous there are a lot of ways to indulge your obsessions in Hollywood. Here’s a few things that I did as a normal person to soak in as much of “real” Hollywood as time would allow. 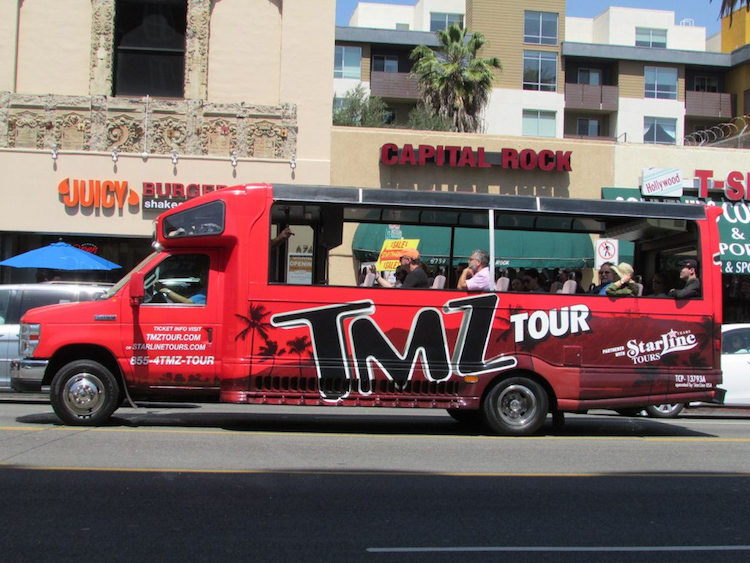 The first thing on my list was a cheesy star tour, complete with yabbering guide and fold-out map. There are dozens of different Hollywood tours on offer, pamphlets of which will be shoved in your face at any and every opportunity. They all promise a line-up of different things: see where Shirley Temple was born, see where Marilyn Monroe ate a burger, see where Fred Astaire stubbed his toe and nearly never danced again.

I chose to take the TMZ tour from outside the Chinese Theatre, due to the fact that if there’s one thing I enjoy more than Old Hollywood and staring at celebrity hedges, it’s pulpy gossip magazine fodder. The tour traversed paparazzi hot spots from The Ivy to Rodeo Drive. Aside from a glimpse of Entourage’s Adrian Grenier exiting a gym, the most enthralling sight was seeing the paparazzi themselves. leaning against trees and lazily smoking cigarettes. It’s a condensed, trashy two hours of fun – and will fill your gossip quota for at least five years.

You finish the TMZ tour at the Chinese Theatre on Hollywood Boulevard, often considered the heart of Hollywood. It’s easy to get overwhelmed with the attractions on offer here. I chose to eschew Madame Tussauds and Ripley’s Believe it Or Not for a more traditional Hollywood experience. The Hollywood Museum, not far off the Boulevard on Highland Ave, costs $15 US –  well worth it for a fascinating insight into the real Hollywood. 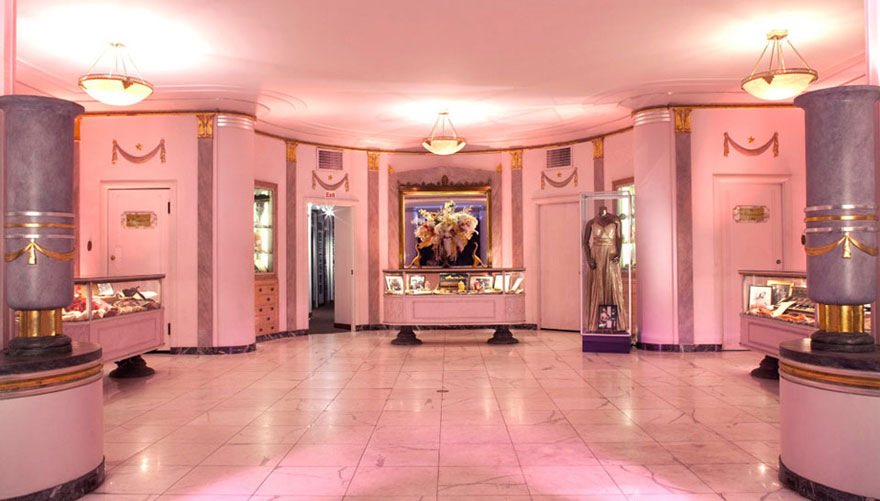 The Max Factor exhibit at the Hollywood Museum. Credit: thehollywoodmuseum.com.

Built inside the old Max Factor hair and makeup studios, the museum houses three floors of set pieces, costumes and memorabilia from some of Hollywood’s most celebrated (and sometimes forgotten) cinematic gems. Wander through the three powder rooms painted in pastel hues of mint, periwinkle and pink to match the skin tones of the redheads, blondes and brunettes of the time. Tiptoe through Hannibal Lecter’s jail cell in the eerie basement of horrors, jumping at every corner as mannequins of Freddy Krueger and Michael Myers lean precariously into view. It’s more chilling than any of the flashy haunted houses on offer elsewhere in Hollywood.

On the third floor is a special exhibit: the Best of the Emmys. Costumes from practically every important television show in history sit behind glass cases here: Betty White’s velour tracksuit from Hot in Cleveland! Maura’s rainbow kaftan from Transparent! I never thought I would be starstruck by a kaftan. A shrine celebrating LGBT representation over the years gives the exhibit more cultural punch than just a collection of famous clothes.

My top tip for exploring this museum would be to take your time – and make sure that you visit the bathroom. Weird advice, but the restored restrooms on every floor are in close to their original state, complete with saloon doors, pastel hues and a chain to flush. I daresay my closest celebrity experience (aside from Adrian Grenier) was that I sat on the same toilet as Marilyn Monroe. 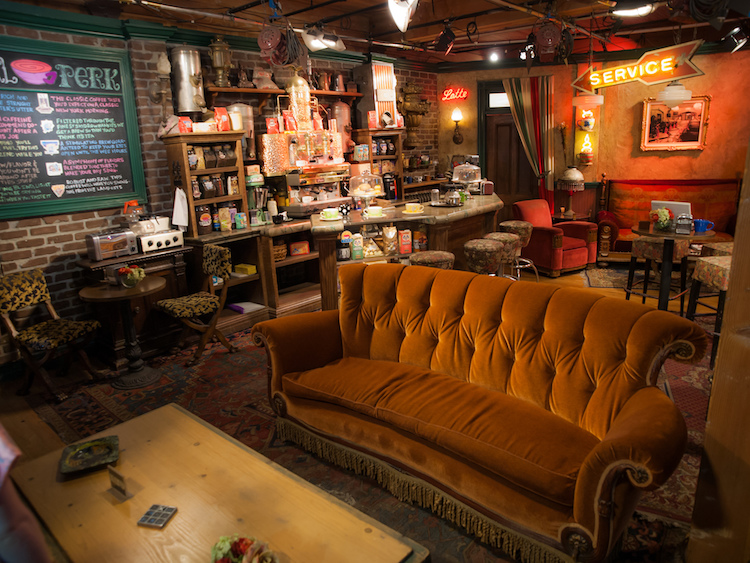 If you're heading to Burbank, also known as Studio City, give it some thought before deciding what to do with your time and money. Practically every studio offers a tour, but I chose to go with one of the longest-standing and most successful studios: the mighty golden sheds that sit beneath the famous Warner Brothers water tower. We sat in an elongated golf cart as an emphatic tour guide drove us through some of the most iconic streets in film and television history, from the fire escape where Spiderman did the sloppy upside-down kiss to Dexter’s kill cabin in the woods.

After turning your neck 360º for over an hour, a stop off at Studio 48H is a welcome relief. This relatively new part of the studio tour houses interactive sets, green-screen technology and photo opportunities galore. A presentation on the significance of sound in cinema didn’t seem gripping on paper, but sitting in the state-of-the-art studio as the Gravity sound mix came to life was just as enthralling as seeing George Clooney hurtling through space.

I walked around Central Perk before a brief sit down on the infamous Friends couch. Ironically, if I had more (any) friends with me we could have even recorded a scene from the show as a memento. Guess it hadn’t been my day, my week, my month, or even my year.

I was back at Warner Brothers the next day, this time as an audience member for Conan O'Brien's late night show, Conan. There are plenty of websites where you can apply for free filming tickets – some you’ll get right away, while with others you have to hedge your bets. Conan tickets can be nabbed fairly easily from the Team Coco website. Just don’t bother with Ellen: a friendly security guard told me you’ll be waiting at least three years for those tickets.

The Conan audience process was relatively painless. Prepare to wait for an hour or so in a human battery cage, but after that you're let into the studio where there are free chocolates and famous people. Being in the crowd was a surreal experience. American audiences don’t require anything close to the gentle one-hour warm-up that Kiwis need before they're sufficiently pumped. After just five minutes even I was considering twerking to win a Conan t-shirt.

I had several other things on my LA list that I didn’t find time for, but which I would love to pass on to budding pop culture junkies heading that way. I'd planned on attending an aerobics session at Slimmons, the Richard Simmons studio, where many classes are still led by Simmons himself. By all accounts, this is an energy-packed, sweat-fuelled hour with an infectious 70-year-old celebrity. And, at only $12, there are no excuses not to see this legendary leotard-wearer in the flesh.

And I'd have loved to catch a double feature at the New Beverly Cinema, recently purchased by Quentin Tarantino. Dedicated to showing films only in 35mm, the cinema offers a mix of blockbusters and forgotten B movies, introduced with old trailers and pre-feature presentations. And sometimes, if you’re lucky, Quentin himself might even stop by to check on the popcorn. Ah well, maybe next time.

Alex Casey is the television editor of the culture website The Spinoff.