Cycle-tourist and train traveller Diana Noonan steps back in time on a journey through beautiful rural Romania. 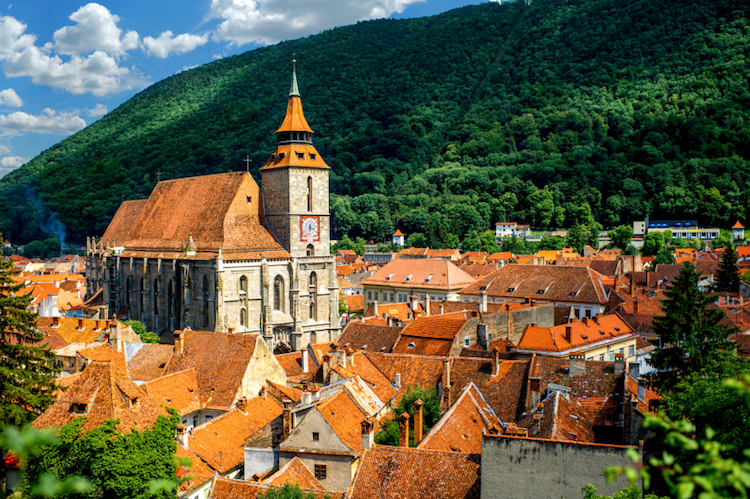 They may be billed as the two best ways to absorb the pace of life in a new country, but neither slow-training nor cycling can ever prepare you for the medieval encounters you’ll experience in rural Romania – or the effects of the visinata (home-brewed sour-cherry brandy) the locals are sure to welcome you with.

My first slow train in this time-warped country chugged me out of crazy, bohemian Bucharest with its tiny cafes, public parks, apartments on a decidedly Soviet lean, and bullet-grazed buildings dating back to the 1989 overthrow of Romania’s megalomaniac leader, Ceaușescu. Station by station, and with our mountain bikes rattling beside us, my cycling companion and I were gently propelled into an unreal world of horse and cart transport, animal-drawn plows, and villages where every home relied on its front-yard well for water.  Around us, fellow train passengers scoffed boiled eggs and lit up strong-smelling roll-your-owns which they happily shared with their pre-adolescent children. 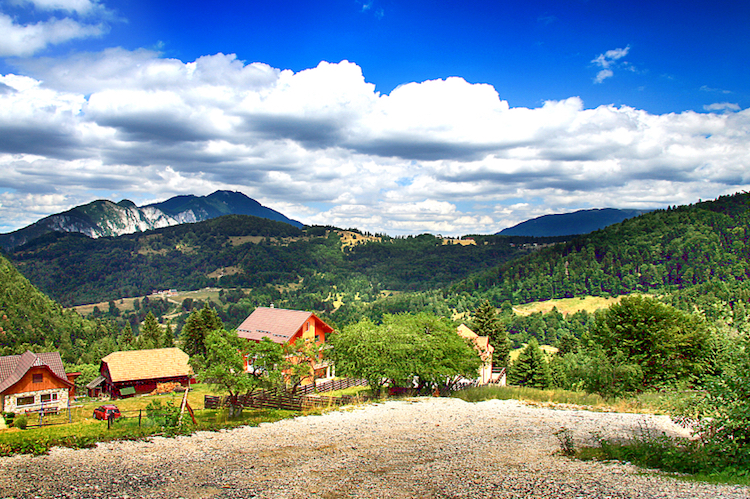 We disembarked in the town of Buzau and cycled north past fields of ripening grain where teams of harvesters were busy with their scythes and pitchforks (not a mechanical harvester – or even a tractor – in sight). Fruit and nut trees of every sort lined the roadway, and rows of vegetables grew right up to the front door of each wattle and daub constructed house.

Our first base was the tiny village of Vipersti where each morning women led their milking cows (on leashes) to graze on communal land, or herded gaggles of geese toward the river. From this hamlet, we cycled half a day to the village of Colti, crossed its fraying bridge (with as much of its decking missing as what remained) and found ourselves among cobbled streets, stone shingled roofs and farmers bringing in the hay on donkey carts. 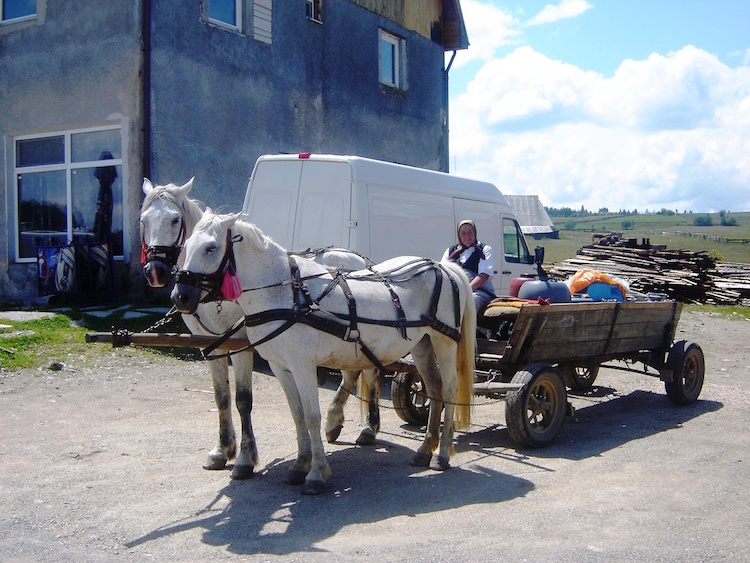 After a scenic two days pedalling to the city of Brasov, we secured tickets on a train to Cluj-Napoca, the unofficial capital of Transylvania, and our setting-off point for the vast plateau of Marisel. Step-back-in-time scenes were repeated all over again in this alpine farming region with a fairyland overlay of Hansel and Gretel homes, crafted entirely from hand-sawn timbers, dotted among hectare after hectare of bright wildflowers.

To stay in these parts is to be plied with blueberry liqueur (made from berries soaked in sugar and left in barrels over summer to ferment) and delicious pasta dredged in oily breadcrumbs sweetened with a little sugar. In this farming community, every able-bodied person was busy mounding up potatoes while older women sat in their doorways knitting identical skeins of dark green yarn into rough cardigans. 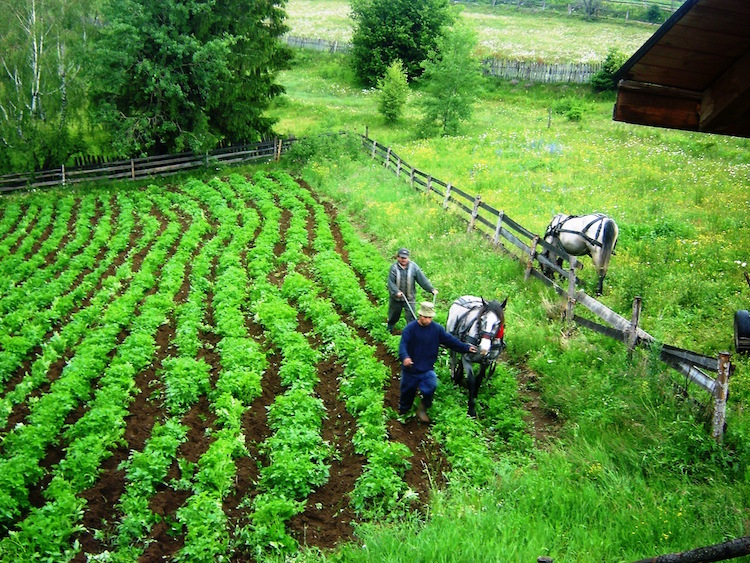 Mounding up potatoes in Transylvania with the help of a horse-drawn plow. Photo: Diana Noonan

But while we quickly adjusted to these age-old scenes, our next destination – the rural far-north of Romania, bordering Ukraine – had us thinking we had happened upon a series of medieval movie sets. To reach this region, we loaded ourselves and our bikes onto a slow train from Cluj-Napoca to Sighetu Marmației, a city of 38,000 in the northwest. Each tiny station on the way was a stop of 15-20 minutes. At one stop, workers wielding scythes and needing to gain access from one field to the next (the train having temporarily blocked their way) clambered onto the carriage vestibules and disembarked down the steps on the other side.

It was while we were cycling on a day trip 30km from Sighetu that we stumbled upon the village of Cornesti – a place that seems to have time travelled direct from the 13th century. It was Sunday afternoon and men in white hand-smocked shirts with wide bell sleeves and calfskin waistcoats were ambling along dirt roads with their buxom wives, toward churches built entirely of interlocking timbers. Outside one of these buildings, my cycling companion swapped his shorts for a pair of longs, and we both went inside to catch the last half hour of the church service. 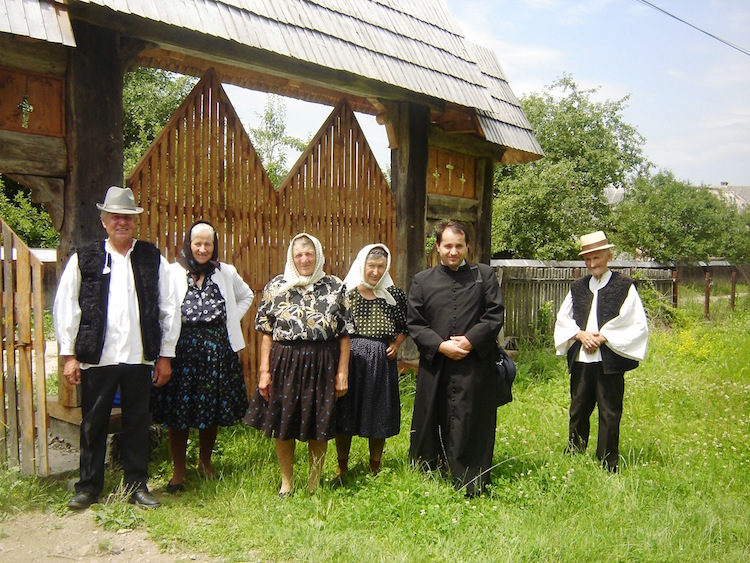 At its conclusion, we were scooped up by a couple from the congregation who invited us back to their rustic home –  no plumbing of any sort, but a house cow in the adjoining byre. We dined on veal cutlets, followed by slices of home-made cheese and slabs of yeasty cake. When the sour-cherry brandy made its appearance (served one shot after another to the accompaniment of many toasts) it seemed impolite to refuse. If only we'd had the presence of mind to remember we still had to cycle home.

In the end, a half kilometre after saying our goodbyes, my worse for wear companion gave up the effort of pedalling and crash landed his bike in a leafy churchyard where he crawled under a tree to sleep. 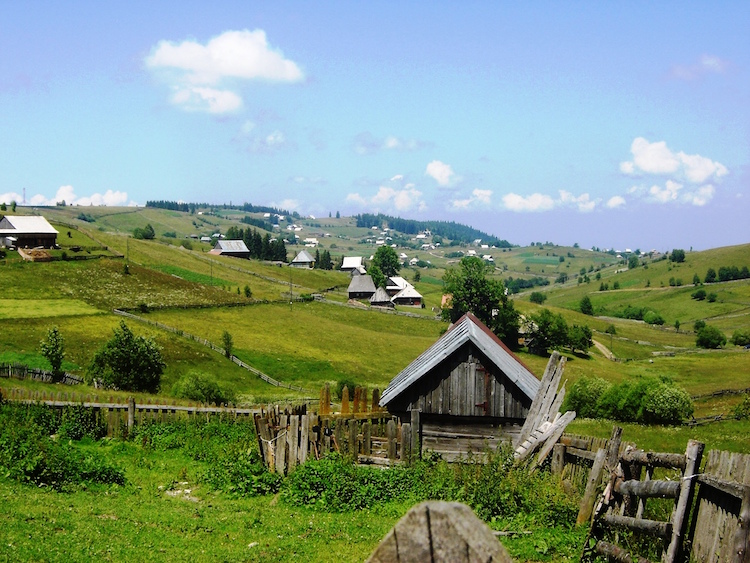 The sight of picturesque Marisel is the reward of two days of up-hill cycling from the city of Cluj-Napoca. Photo: Diana Noonan

Ending our travels in bustling Timisoara with its magnificent Austro-Hungarian architecture, our cycle and train tour through rural Romania took on a dream-like quality. It might have been a hallucination brought on by too much blueberry liqueur and sour-cherry brandy, but we could have sworn we stepped back in time.