South of Sydney: A road trip along the spectacular South Coast

Because there's so much more to New South Wales than just Sydney, why not rent a car and get out of town on your next visit? Head south for gorgeous beaches, charming small towns, great food and some of the best whale-watching in Australia.

I’m ashamed to say that when it comes to New South Wales, I’ve never really thought too much about anything outside Sydney. But I recently discovered that getting out of the city is really worth it, and if you take a road trip south, there’s much to feed the eyes and soul.

After a delightful evening at a show and dinner at Flying Fish in Jones Bay Wharf (nothing better than starting an Aussie holiday with Moreton Bay bugs) I set off bright and early for Kiama, a coastal town 120 km to the south. By the time I arrived I was ravenous, so I stopped for a healthy breakfast at local cafe Penny Whistlers before heading towards Kiama's famous blowhole. Though I'd been a bit annoyed at the blustery weather, I soon realised this actually worked in my favour as the waves and blowhole were even more spectacular than usual. I found myself uncharacteristically lost for words at the sheer power of the ocean crashing in over the slate grey rocks, a reminder of my relative insignificance against the forces of mother nature. The blowhole was a total crowd pleaser in every way. I don’t know what made me happier: the enormous gush of water rocketing into the air like a colder, wider version of geyser, or the oohs, aahs and gasps of joy from the group of school kids beside me every time it did.

I poked around the town a bit and could have stayed longer, but I had a date in Mollymook Beach 90 minutes further south. Bannisters by the Sea is well-known for its Rick Stein restaurant, but I’d heard the pool bar there had recently been named the Best Small Bar in Australia. So I went to check out the views from there and I could see why they won: the spectacular vista over the infinity pool and out towards the Pacific Ocean was gobsmackingly gorgeous. It was the perfect way to end a day. 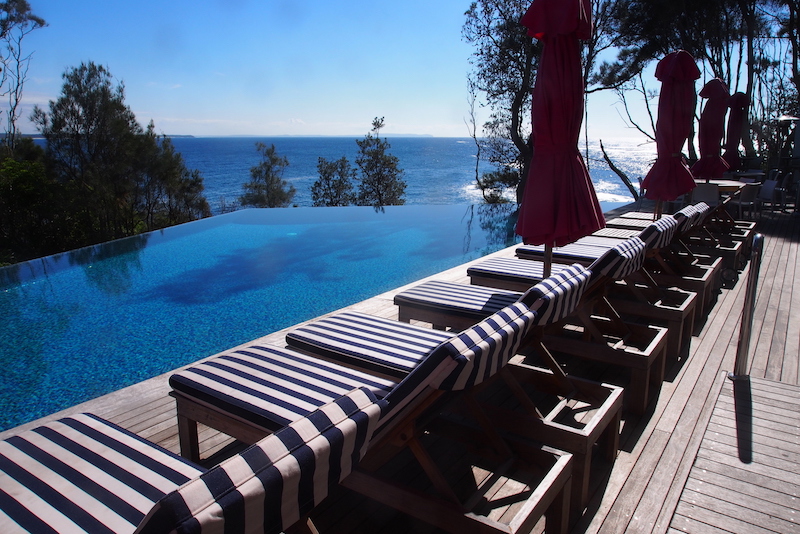 The next morning I went for a swim in the clearer than clear waters of the Bogey Hole Tidal pool at Mollymook, kicking myself for not packing a snorkel. It was a lovely refreshing start before my two-hour drive to Narooma.

I’d been told to stop at Bodalla on my way and I’m glad I did, as meeting the charming Sandra McCuaig of Bodalla Dairy was a total treat. Bodalla was once a thriving dairy region, but most of these farms are now gone. Now, Sandra is trying to bring dairy back to the area. She showed me through the cheese factory and after feeding one of the adorable cows by bottle, we had a sensational milkshake in her retro-style milk bar. I also managed to fit in a cheese tasting and could see why Bodalla cheese was now being stocked so widely across Australia. Bodalla Dairy will soon start serving ice cream, which I have no doubt will also be a big hit. 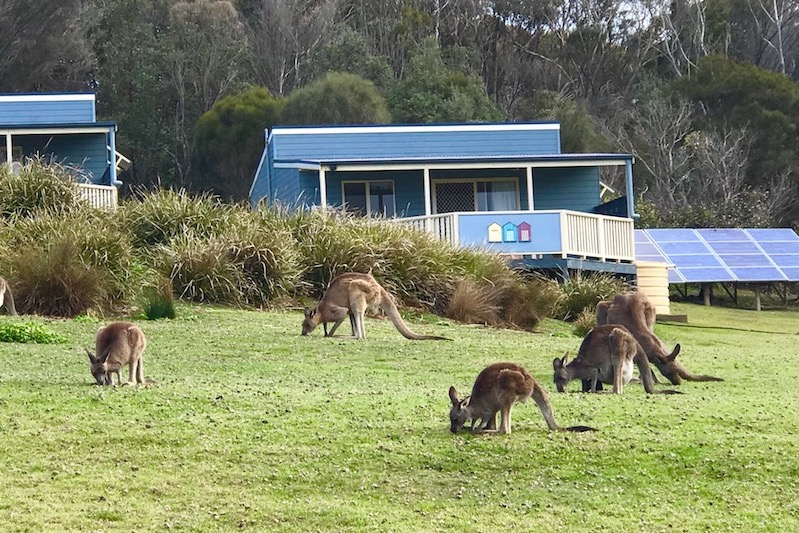 When I said I hadn’t seen a kangaroo yet, Sandra pointed me towards Potato Point Holiday Park. The winding road took me to a magnificent white sand beachfront, and hanging around outside the tents and cabins as casual as you like were a whole lot of kangaroos and wallabies. I'm not sure how I’d feel about encountering one of those big guys first thing in the morning on holiday, but everyone seemed to be co-existing just fine.

There was more wildlife to be seen when I arrived in Narooma after a truly stunning drive around the dramatic coastline. I whiled away the sunset hour around the rocks at Mill Bay Boardwalk accompanied by the cheeky-faced glistening seals in the water. I then headed to Quarterdeck, a brightly decorated tiki bar at the water's edge with tremendous seafood and cocktails. It was an unexpected for a tiny town like Narooma, but then again, Australia is full of fun surprises. 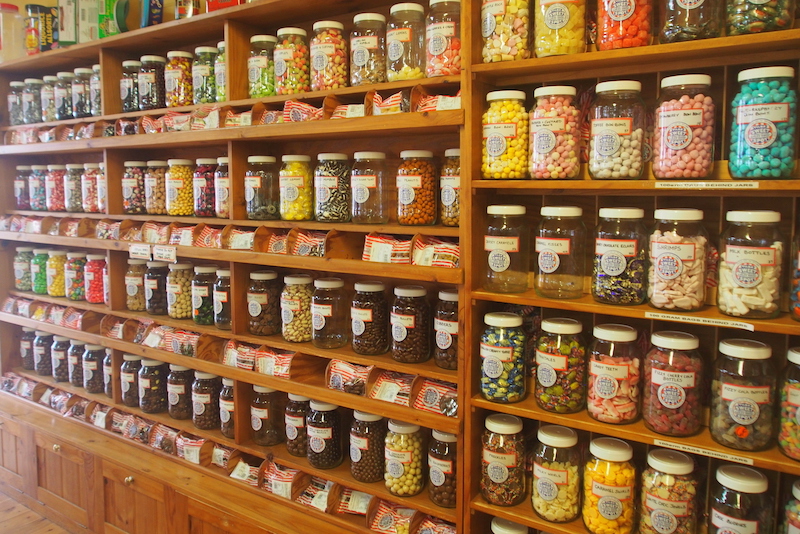 The next day’s drive was to my final destination, Eden. The owner of Quarterdeck had recommended I stop in Central Tilba on the way which I’m glad I did. This adorable Australian heritage village has been immaculately maintained, and a visit there is like stepping back in time. The buildings constructed by the European settlers have been filled with tea shops, cafes, fudge shops, galleries and so much more. I couldn’t resist another tasting at ABC Cheese Factory – all in the name of research, right?

After a 90-minute drive though some lush forests, I finally arrived at the town of Eden. For a long time, Eden was dependent on primary industries like fishing and forestry. But with the loss of those industries, it’s turned towards tourism with gusto. Luckily, Eden boasts some fascinating history and is one of the best places for seeing humpback whales in the state, possibly the entire country. 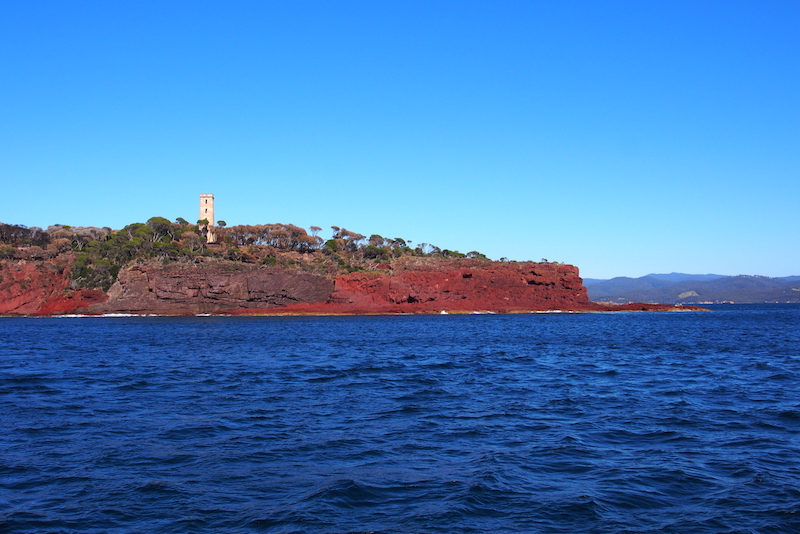 The view from a whale-watching boat, with Boyd's Tower in the background. Photo: Alexia Santamaria

Eden’s relationship with whales has changed significantly over the years. Once a whaling town, it’s now all about respectfully observing these splendid creatures. Despite the gruesomeness of a time when whales were seen as simply resources to be exploited, it was fascinating to spend a couple of hours learning about the area’s history with local guide, Tim Shepherd. Our drive along the Light to Light coastal trail included stops at the glorious Boyd's Tower (one of the two 'lights' that bookend the trail – the other is Green Cape Lighthouse, 31 km away) and a whalers’cottage which has been largely preserved from those grisly days. 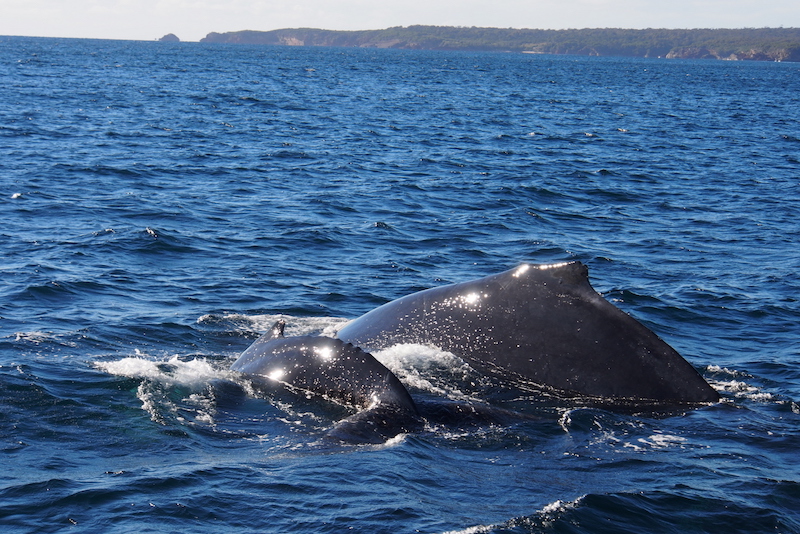 My final day was spent on the water, getting up close and personal with humpback whales in Twofold Bay, one of the deepest natural harbours in the world. I'd timed my visit perfectly as during the spring months (September to November), many mama whales and their calves stop here for a rest. We spent a fantastic morning watching them frolic and play in their natural environment. For the second time in a week, I found myself lost for words while observing the splendour of these gentle giants.

My last evening on the Sapphire Coast ended with some food and drinks overlooking Eden Harbour at Drift (I’m still thinking about those tempura oysters!). I couldn’t be happier to have discovered that there’s so much more to New South Wales than shopping, eating and sunning myself on Bondi beach.

Alexia Santamaria was a guest of Destination NSW