Tasmania - In a State of Nature

Tasmania is newly popular for its food, wine and art scene — but it has always been one of the most spectacular states in Australia boasting some amazing natural wonders and interesting wildlife.

A weaker person would turn vegetarian on the spot. Propped against the ruined chimney of a tumbledown cottage somewhere in north-eastern Tasmania, feet gently toasting at the campfire, I’ve been gazing over the rim of my wineglass at a shimmering sunset that rivals the aurora australis. Then, at the very moment that I sink my teeth into a succulent wallaby kebab straight off the barbie, what should come bobbing past through the long grass but the cutest little furry brown wallaby this side of Walt Disney. It’s an awkward moment.

Things were going so well up till then as we’d driven into the high country on a quest to view Tasmania’s extraordinary wildlife in its natural surroundings. 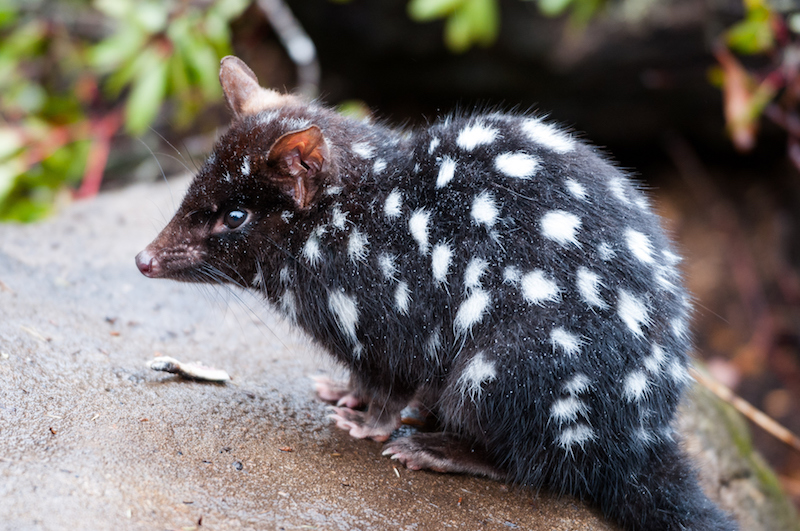 The eastern quoll, found only in Tasmania. Photo: Getty Images
Most Australian creatures are nocturnal, so after dinner we loll around the campfire sipping a crisp Ninth Island chardonnay as the surrounding hills become silhouettes against the fading glow of the sunset. When the stars begin to prick out their patterns in the velvety black of the sky, we bundle back into the 4WD and set off on our safari.

It’s ridiculously easy to spot the animals. Quolls, a type of spotted marsupial cat, were already bounding through the long grass hunting moths and other insects as we sat by the fire, and now we see dozens more, their eyes reflecting bright green in the headlights. Swerving this way and that across the grassy valley bottom, we count scores of wallabies and pademelons, dozens of possums, a handful of kangaroos, several bandicoots and, marvellously, over thirty wombats, or ‘ground bears’, trundling complacently about their business. 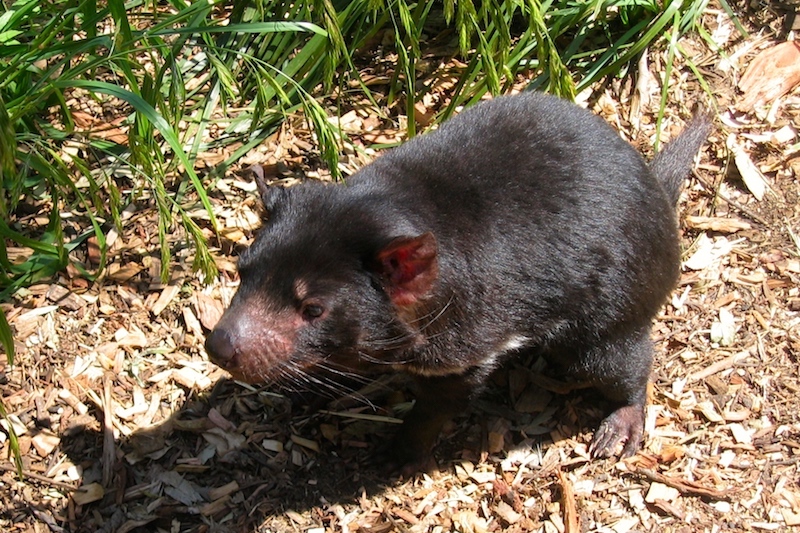 A Tasmanian devil. Photo: Pamela Wade
Lastly, we see a scattering of Tasmanian devils, black and busy, scuttling away into the dark. Then, nearly nine hours later, I’m back at my hotel. My head is full of natural and colonial history, astronomy and biology; my tummy is full of local wine, cheese and local produce. I ought to be satisfied — but my appetite for Tasmania has been only whetted. 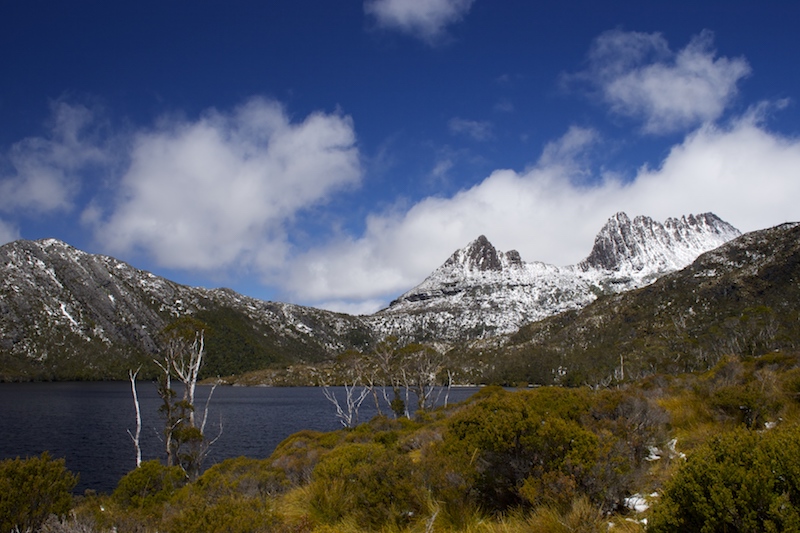 Cradle Mountain, with Dove Lake in the foreground. Photo: Pamela Wade
In the morning I drive west, through rolling fields of green, mustard yellow and red soil and wind up into the National Park. Leaving my cosy cabin, I set off for Dove Lake, a short drive away through green-gold button-grass plains and open woodland. Ankle-deep snow contrasts vividly with the lake’s tannin-dark water, which is a perfect mirror for the distinctive shape of Cradle Mountain itself. The slippery conditions mean the circuit walk takes me an hour longer than estimated, but the sun is out, the mountain and the lake are beautiful and, as a diverting highlight, on a little shingle beach I watch as a bold currawong, a big bird like a crow, snatches an entire sandwich out of a man’s hand. 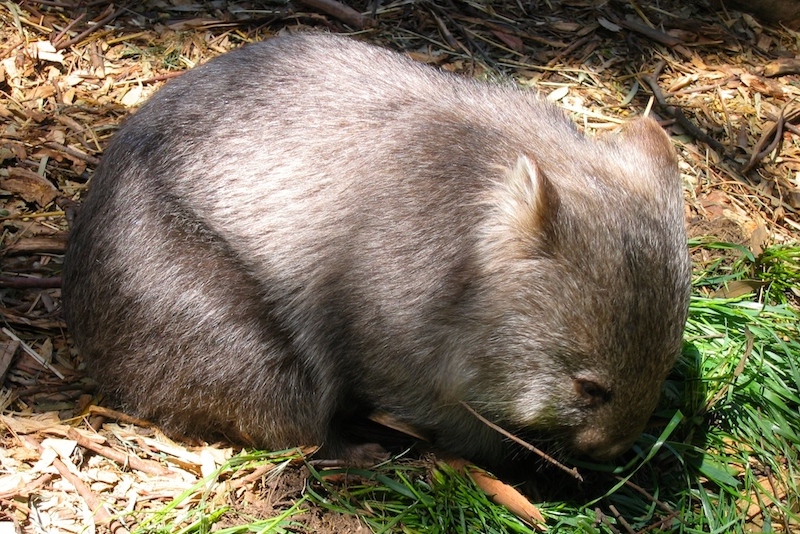 A Tasmanian wombat. Photo: Pamela Wade
Near my cabin I spot a wombat waddling along just metres from the boardwalk. I crouch and watch as he works his way right up to me, busily chewing the wiry grass. He is almost as big as a Labrador but with much shorter legs, and a thick glossy coat.

Later, on a walk through the bush, my guide tells me this World Heritage Area is graded seven out of ten, the highest bar one in the world. We see another wombat and some wallabies, but best of all is the platypus in the pond right by the lodge, trailing a rippled V through the water and having a leisurely scratch on the surface.

The Gordon River, Tasmania. Photo: Pamela Wade
Next day I drive still further west, to the really wild country where the air is purer than anywhere in the world — officially. Here, after winding for nearly 200 kilometres through national parks, the Gordon River empties into Macquarie Harbour, second in size only to Sydney’s. It’s remote here, but not without comforts — the town of Strahan has a variety of accommodation options — although there are some very uncomfortable places too. Tucked back in the harbour, Sarah Island was a grim penal colony that makes Port Arthur down south look like a holiday resort, and a visit there is confronting, but fascinating.

It’s the dark side of a river cruise that celebrates another kind of darkness: that is, the water stained by tannins from the surrounding forest. In the early morning when conditions are right, its blackness makes for stunning reflections along the sheltered river, the trees and surrounding peaks, the boat and even the clouds above, mirrored so perfectly that it’s like floating in the sky itself. It’s almost surreal, and the experience is heightened by the silence: in the thick temperate rainforest on either side, there are almost no birds to be heard. The ancient trees here evolved so long ago that they pre-date birds, and have no flowers or berries to attract them. But there are platypuses, and it’s a delight to spot one popping up to the surface to send ripples towards each bank as it swims along, before diving down again. 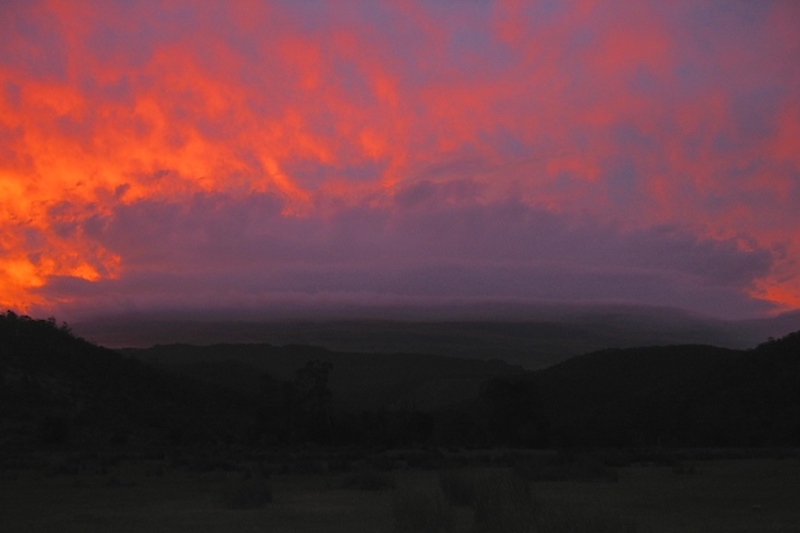 Sunset in Tasmania. Photo: Pamela Wade
It’s time to head back to civilisation, to the fine wine and restaurants, the breweries, art galleries and shops. They deserve their attention — but no visit to Tasmania would be complete without spending time with both its spectacular scenery and its equally remarkable wildlife.
Australia tasmania