Turtles on the runway and has anyone seen the pilot?

Bad weather, strikes and technology glitches may cause most major flight disruptions, but escaping animals, lovesick turtles and missing pilots are also grounding their share of planes. While records show that most flights will take off as scheduled, unexpected events sometimes arise to disrupt normal flight patterns throughout the world.

We have  scoured the archives to compile a list of the most unusual reasons that have been blamed for recent flights delays or cancellations. 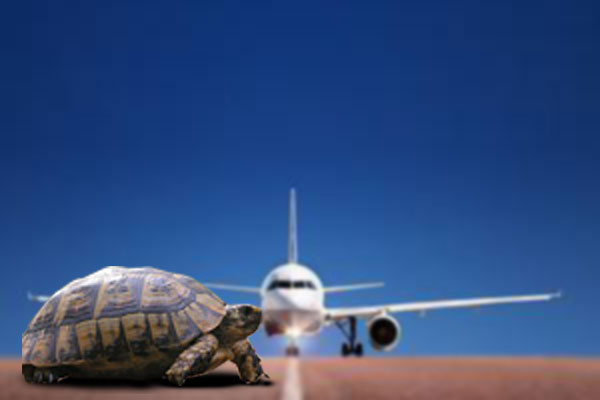 1. Where’s my pilot?
Last week, the Times of India reported that two Air India flights had to be cancelled at Chennai airport after the airline's pilots didn't turn up for duty.

One pilot reportedly refused to fly because he had completed his shift, while the replacement did not show.

2. Here kitty, kitty
In December last year, a cheetah delayed a Qantas domestic flight in Australia. Handlers were reportedly concerned about the pallet being used to transport the big cat, named Tokoloshe, and called for reinforcement.

This was probably a smart move – in October 2008, a cheetah managed to escape from its cage in the cargo hold of a Delta domestic flight. Experts were called in and the cheetah (not to mention the baggage handler) were saved.

3. Snakes on a plane
Life imitated art in April 2009, when Australia had its very own “snakes on a plane” incident. The incident was somewhat less dramatic than the 2006 Samuel L Jackson movie of the same name, with four baby pythons managing to escape from their cage.

Two Qantas domestic flights were cancelled as a result. 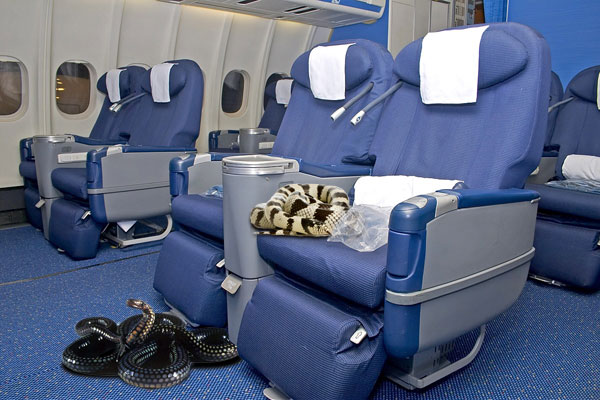 4. Otters on the loose
Not to be outdone, two sea otters escaped from their cage on a Continental domestic flight in the United States in December 2009. In this case, the otters made their way out of the cargo hold and on to the runway, delaying the flight by 80mins.

Each year, the turtles reportedly make a slow overland trek across the airport’s runways en-route to their breeding grounds.

In August, a Delta Airlines flight in the US made an emergency landing because of an overflowing toilet. The incident attracted additional headlines after a high profile passenger, former Guns n' Roses guitarist Slash, used social media to share the story with the world.

Also in the United States, a Continental Airlines flight in March was delayed three hours after a toilet in the first class cabin was found to be damaged.

7. Pipigate
In August, French actor Gerard Depardieu was thrown off a flight from Paris to Dublin after he allegedly urinated on the plane’s floor.

In an event that the French media dubbed “pipigate”, the actor attempted to use a small bottle after he was reportedly barred from using the lavatory before the plane took off.

The flight, which was still on the runway, was delayed two hours while the carpet was cleaned.

8. People power
In November 2010, Ryanair’s flight schedule was disrupted after more than 100 angry customers refused to leave the plane after it was diverted to Belgium, rather than its intended destination in Northern France.

9. UFOs or simply a bad smell?
Last month, several US websites carried a story claiming that UFO sightings prompted the Federal Aviation Administration (FAA) to temporarily close air space over New York. According to the FAA, a gas-like smell promoted the closure.

10. Airspace violators – Lawnchair Larry
One of the most unusual disruptions to flight schedules occurred in the United States almost 30 years ago when Lawrence Richard Walters literally “floated” into Los Angeles International Airport airspace.

In 1982, the truck driver, who became known as “Lawnchair Larry”, caught a bird’s eye view of LA from the comfort of a patio chair that was attached to 45 helium weather balloons.

Larry, who took off from a house in San Pedro California, reportedly intended to hover just above ground level but ultimately reached an altitude in excess of 4,000 metres.

His in-flight survival kit included sandwiches, a CB radio, beer and a pellet gun, which he intended to use to gradually shoot the balloons and descend slowly back to terra firma.

He managed to shoot several balloons before dropping the gun.

Fortunately, Larry’s flight ended safely after his balloon eventually lost altitude and became tangled in wires, which caused a black-out in parts of Long Beach.