Touring the Wonders of Ancient Egypt

The journey of a lifetime awaited Stefan Schulzky from Flight Centre Blockhouse Bay as he joined his tour around the majesty of Egypt.

After nearly thirty hours of travelling, I had finally arrived in Egypt. I had imagined a slightly old and crumbling airport with fans that barely keep up with moving the hot air around the lines of people queuing to secure their visas on arrival. But the airport was very modern, the air conditioning working and the wait was by no means as bad as I had experienced in India before.

On the way to Giza, I was looking out the window of the transfer bus and realised that most of the apartment buildings we were passing looked not yet finished. But why were they all sporting a selection of satellite TV dishes? The explanation from our guide first sounded quite bizarre, but when you can save yourself property tax by not putting a façade on your building, or not completing the balconies, why would you? Satellite TV in Egypt is free, so once you have bought your dish you are set to enjoy all the programming you could want.

When I opened the curtain in the hotel and was greeted by a view of an inviting pool with the pyramids of Giza in the background I knew I had arrived in the land of the pharaohs! 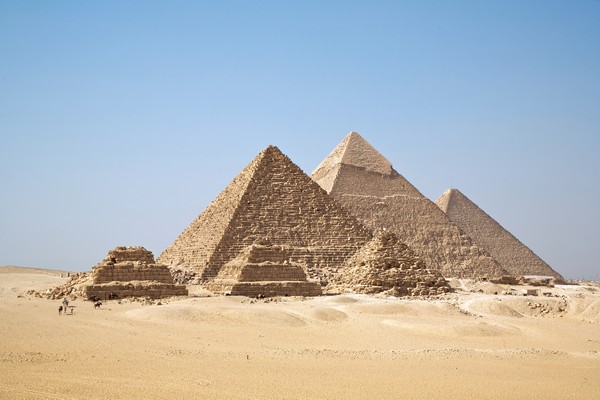 The Egyptian Museum was a great place to start the exploration of Ancient Egypt. Our tour guide was so passionate that he brought the artefacts to life. Talking about the astonishing feat of bringing a block of stone from Ethiopia to Egypt that can only be cut by diamonds that needed to be brought from a different part of Africa had me wondering how the ancient Egyptians had accumulated all their knowledge.

After a good night’s rest, the next day of our Egypt holidays was all about the pyramids. Starting off with the Necropolis in Saqqara and then moving on to “The Big Three” in Giza. Surprisingly enough, the town of Giza is creeping ever so much closer on to the ancient site. From the plateau in front of the pyramid of Cheops you have a spectacular view of the accumulated mess that is Cairo.

That night we found ourselves on the train to Luxor. I had thought that the clickety-clack of the railway carriages making their way to Upper Egypt would easily put me to sleep, but as it was my first overnight rail trip, I had to get used to the train stopping for no apparent reason and nearly throwing me out of my bed. Well, maybe that is an exaggeration, but it certainly felt like it at 3 am in the morning when another jolting stop woke me up. 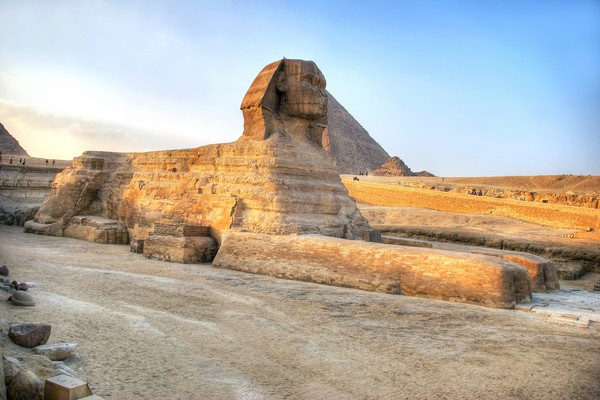 Luxor greeted us with brilliant sunshine and after a quick stop at the Nile Cruiser, we were off again to see more of the ancient sites. We started off with the Valley of the Kings – and got to meet a special friend that was going to stay with us for the next 6 days or so – meet the heat! Temperatures had risen to about 40 degrees as we were slowly making our way through the Valley of the Kings, where archaeologists have uncovered more than 50 royal tombs. Some are open to be visited and it is very impressive to see what people about 4000 years managed to achieve without the help of dynamite or precision drilling, let alone computers to simulate the final result.

We also met the other constant companion for the rest of our time in Upper Egypt – the vendors. These guys will follow you around and offer you all they can possibly think of in a variety of languages until they find the one that you understand. That is when the hard sell begins. To be honest it is all a lot of fun, but can easily wear you out. Especially when you are exhausted from the heat and all you want to do is sit in the shade and be left alone. For the women in our group it sometimes was so much easier to have an instant wedding – and present one of the men as their husbands. Needless to say the “divorce” followed as soon as we were back on the bus.

Apart from the Valley of the Kings, we also visited the Temple of Queen Hatshepsut (or if you have problems with remembering Pharaonic names, try “Hat – cheap suit”) and the Colossi of Memnon.

Luckily we got to spend the afternoon relaxing by the pool or in the comfort of our air-conditioned cabins on board the Nile Cruiser, before heading out to one last site – Luxor Temple. It is right in the city centre and when lit up at night, there is not much else that I would consider more majestic. 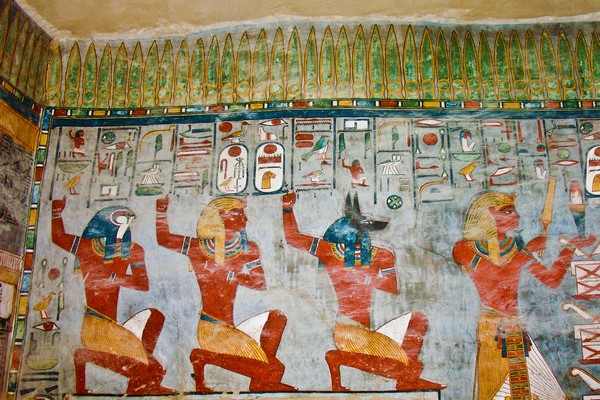 One of the most amazing experiences possible on Egypt tours was to greet me the next morning – after an early morning wake-up call and crossing the Nile in the dark, we were getting into the basket of a hot air balloon, right next to the Colossi of Memnon. It was stunning to see the Valley of the Kings and the Temple of Queen Hatshepsut, but this time while silently gliding through the air above.

Silently that is until the pilot started the burners again to gain a little bit more height and get us drifting into another direction. Seeing the sun rise over the Nile and making out the green band of fertile land snaking through the desert is a sight that I will not forget in a hurry.  The colours of the sky were impressive.

There was one more temple to see before setting sail, the Temple of Karnak. This majestic temple with its hall of columns just blew me away. The sheer size of the whole site is awe inspiring and finding out that the ancient Egyptians put down foundations that were earthquake proof to some extent just completely stunned me.

The most perplexing aspect of the temple though was the fact that quite a few of the carvings are still in colour – and yes it is the colour originally applied over 4000 years ago. Bearing in mind that Egypt is constantly bathed in sun and there are sandstorms to deal with, I just wonder why our modern paint hardly stands up to the test of time. 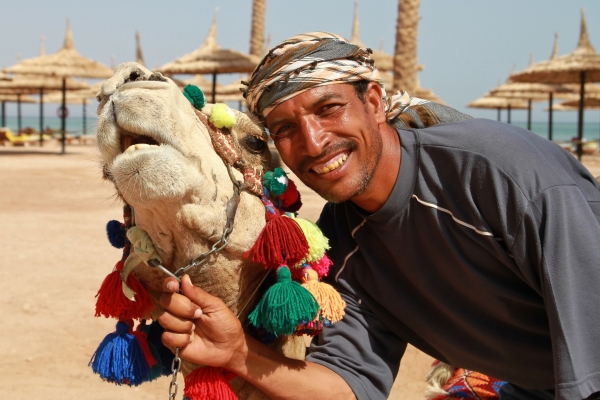 For the next couple of days the Nile Cruise Ship became our home from home, and it was just lovely to sit on a sun lounger while reading a book, or just gazing at the landscape drifting by. We passed ruins of temples, that “just sit there” rather than being used as tourist attractions.

Going through the locks at Esna, we encountered a spectacle that was very unusual. As the ship slows down to enter the lock, an armada of small wooden rowing boats descended on us. All of them were filled with vendors of textiles and other artefacts that they will throw up to you on the top deck of the cruise ship. The goods are protected by plastic bags, which in hand turn out to be useful containers for your payment that you sling down to the boat, should you wish to buy the article.

We later arrived in Aswan, which feels very much like arriving in Africa. The temperature increased by another notch and the local people, the Nubians, are definitely African in looks and no longer Egyptian. Aswan is the last city of Egypt. Famously known for the High Dam, south of here stretches the wide expanse of Lake Nasser and the desert all the way to Sudan.

On our last day in Aswan we ended the day with high tea at the Old Cataract Hotel. It was here that Agatha Christie wrote “Death on the River Nile”. We were fortunate enough to be shown around and got a glimpse of true old world luxury, while walking through the rooms and suites of the hotel. The Winston Churchill Suite offers commanding views of the Nile from its balcony, complete with two sitting areas and outdoor fans. 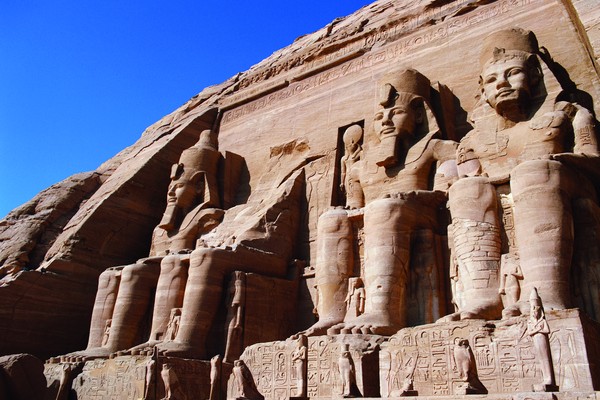 While I was eating the delicious morsels of food, that brought back memories of the best high teas in London, I pondered the stunning mix of impressions that I had that day. It had all started with a very early morning drive to Abu Simbel. This impressive temple complex was saved from the waters of Lake Nasser and moved to higher ground. Even under close inspection it is very hard to tell where the engineers had cut the buildings into blocks to move.

I was even more impressed by the fact that it had been built in the first place, in the heat of the desert and the middle of nowhere. As it was not too busy at Abu Simbel it was not too difficult to slightly close my eyes and wonder what life was like back when Ramses II had this complex built.

These thoughts were coming back to me as I was sipping Egyptian Mint Tea in a hotel that truly embodies the luxury that was enjoyed by a few at the beginning of the 20th century. About a hundred years ago, people started coming to Egypt to discover the wonders of Ancient Egypt. The main reason for building all the pyramids and temples was to live forever, and I found myself wondering if the Pharaohs have actually achieved this goal. We are still impressed by the magnificent structures that were built back then and over the years have discovered who built them and read about their lives in the hieroglyphics in the tombs. Not a bad effort, I think, for trying to be immortal.