Spanish hot chocolate comes dark and thick and nowhere better than at Los Artesanos 1902. Located near the base of Calle de San Martin, Los Artesanos has been serving madrileños for 113 years. The small churrería bustles with square-shouldered, slightly dour waitstaff in gold-embroidered whites. In the open kitchen, the chefs pinch ropes of dough into teardrops which are audibly fried in wide vats of boiling oil and hung to drip dry. The finished churros are stacked four high and served with a mug of chocolate. Dipping is encouraged.

After coffee, head east on Calle del Arenal to the vast and sunbaked Puerta del Sol. Aptly named The Gate of the Sun, the heat here is unrelenting. A formidable statue of King Charles III on horseback dominates the western end. Oxidation has tinged the bronze sculpture, but el rey alcalde remains an imposing presence. Through the beggars, street performers and anarchist political groups is another arresting statue. El oso y el Madroño depicts a bear eating from a Madrona tree and is the heraldic symbol of Madrid, immediately familiar to anyone who’s been into a souvenir shop. Feel the vibes then take the Number 2 Metro three stops to Retiro.

You’ll know you’re in El Parque del Retiro (The Park of Pleasant Retreat) when an African guy with a duffel bag asks if you smoke weed, bruda? A testament to Spanish taste and sensibilities, the public space is a sprawling 142 hectare landscape of beer gardens, monuments, water features – and a colony of sunbathing turtles.

The park attracts all strata of madrileños. Gypsy women, gitanas, force gifts of rosemary on the naive, then ask for cash. Elsewhere, couples sit for caricatures, and somewhere a man plays the accordion. Other landmarks include an 86 metre long, 30 metre high monument to King Alfonso XII and a museum housing the sword of legendary military leader El Cid. Walk a loop of the park, and catch the Number 2 back to the Puerta del Sol. 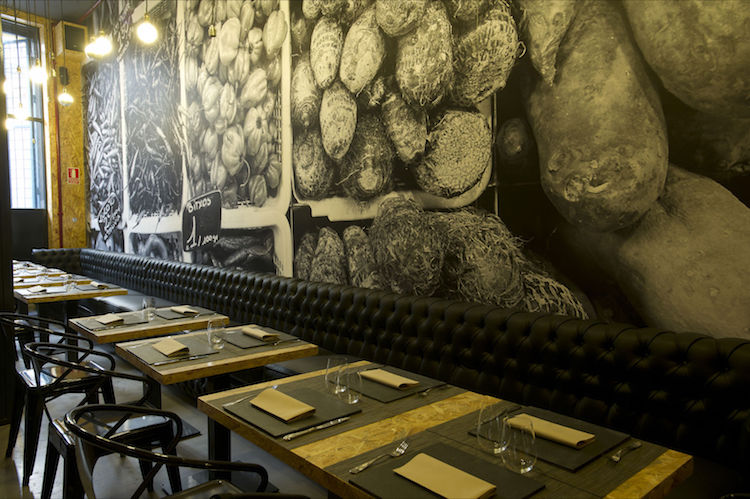 This time, head east, through the Plaza de Canalejas, past the ham museum, and down Calle de Echegary. This unassuming street of low-rent shops and dirty nightclubs holds a charming secret. For 114 years, Vinos Maria Cabello has been a purveyor of Spain’s finest wine and liquor. Don’t bother speaking inglés in this antiquated and dim wine store. Put your faith in the old man behind the counter with a simple ¿qué me recomienda? He knows his wines – his grandfather founded the place. I went for a dust-covered 2002 Rioja Gran Reserva, and a bottle of Venezuelan rum.

Vi Cool by Sergi Arola is a long, thin room in Huertas, the barrio where Miguel Cervantes died. The comic book menu offers up Arola’s take on classic Spanish fare. The potato bombas came on a rectangle of black slate, garnished with violet flowers. They were groovy, and yet nothing on the sangria. Served in a hefty wine glass with cubed peach, apple, orange and pear, Vi Cool’s sangria dances on the tightrope of flavor. It’s strong, with a red wine body, and harder spirits add some bottom end. Its sweetness comes from granulated sugar, which also gives it a bit of texture. And it’s cold. I tried sangria in 11 cities across Spain and this one reigned supreme. 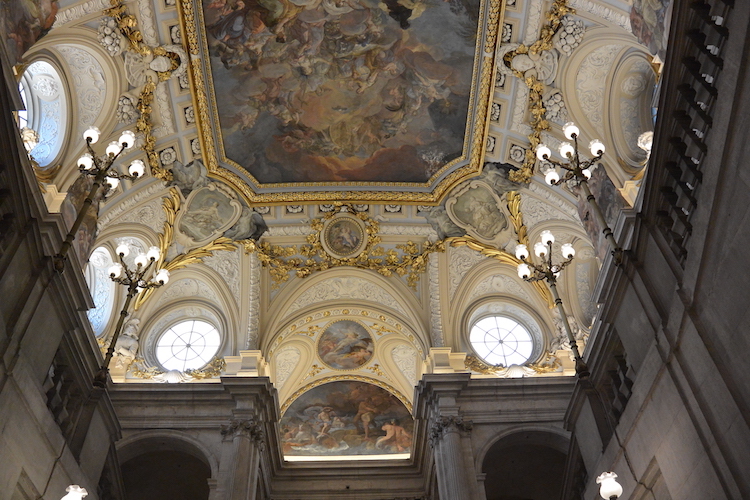 Inside the Royal Palace of Madrid. Credit: Don Rowe.

From Vi Cool, a 15 minute walk will take you through the Plaza Mayor, past the Mercado de San Miguel and right to the golden-tipped gates of the Royal Palace of Madrid. Take your time. After all, the palace has stood for nearly three hundred years already. Thick and weighty tapestries cover the walls, and frescoes by Italian masters like Tiepolo and Giaquinto open every room to the heavens. The carpeted halls of the palace have a sombre, almost religious hush to them, as if sound is no longer permitted in the royal residence. The basilica holds an entombed human effigy. Watch the softened rays of the waning sun wash the palace in gold, then make your exit to Chueca via the Opera metro line.

Chueca is Madrid’s gay neighborhood, and life goes by here at a more frantic pace. If you want to soak in madrileño culture, to get so close you can truly smell it, make your way to El Respiro on Calle de Las Infantes around, say, 10pm. The tapas here are basic: thick cuts of Spanish sausage, roast potatoes, paella, fried chicken, more potatoes, but they come on heaped plates free with every drink. It’s popular, messy and crowded. Expect napkins on the floor and beer on the counters.

From El Respiro, the night is yours. Plan your exit before Madrid sucks you in forever, or go down in a glorious blaze at any of a thousand nightclubs across the city. Through Chueca, Salamanca, and back to Sol with the rising sun, and time enough for one more churro before bed, wherever that may be.

Don Rowe is staff feature writer for The Spinoff and the 2015 Canon Media Awards Student Journalist of the Year.