In car-obsessed LA, areas worth visiting that offer good walkability are few and far between – but they do exist. Moseying along Abbot Kinney Boulevard in Venice is a great way to get a feel for this inimitable neighbourhood. 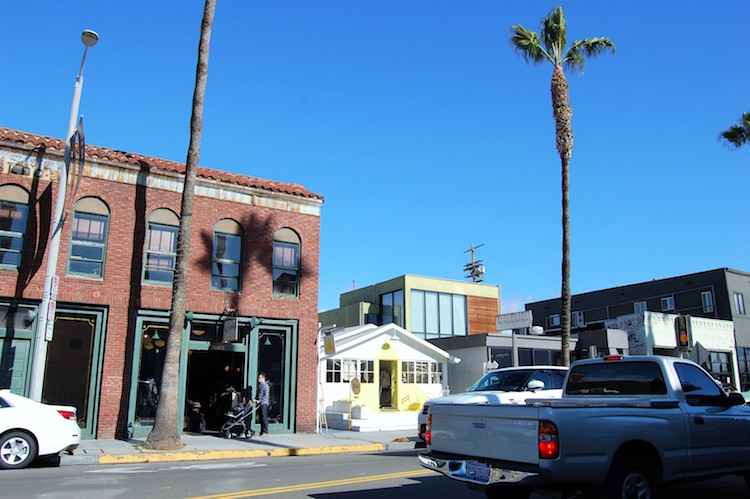 My first Uber experience in LA wasn’t exemplary. The driver hurtled down the bumpy freeway in his  tin-can car complete with biscuit wheels. Luckily he was well-stocked in complimentary mints, which I can now recommend as a wonderful nerve-soother. As we cruised into Abbot Kinney Boulevard I got my breath back, and was glad to step out onto the kerb and be back on my trustworthy feet.

On a work trip with a packed itinerary, I had just one day at the tail end to myself and I didn’t want to spend it schlepping round by car. “Check out Abbot Kinney” a few Angelenos told me. Running towards Venice Beach in West LA, this thoroughfare has quite recently grown into a destination for shopping, eating and people watching – feet and bikes warmly welcomed. In a city famous for mall culture, Abbot Kinney offers the exact opposite: an array of indie and smaller-scale businesses, most of which perform well on the ethical and environmentally conscious scale. It’s undeniably hipster, but with a fascinating LA twist. 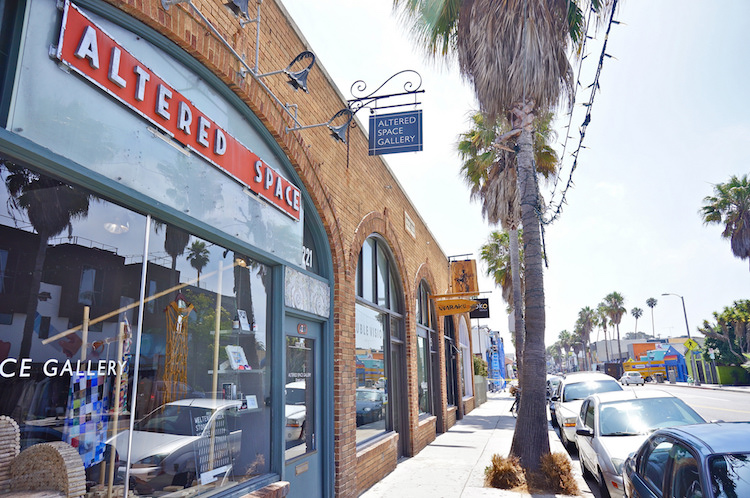 I was a little too eager that morning, discovering most of the retailers along this strip don’t open till 10am or later. My plan was to walk up one side of the street and down the other, making for Venice Beach, and perhaps diverting to a few neighbouring spots of interest. I knew of a few great restaurants round here but, without a booking, I knew my chances were slim.

I decided to trust in providence, eating wherever the food looked good. Which brought me to Gjelina. The restaurant proper is very popular and books out, but next door they have a takeaway arm, GTA, serving a quirkily cosmpolitan menu: think loaded brisket banh mi and squash blossom pizza. I married my takeaway Gjelina tartlet with a coffee from Intelligentsia – for anyone seeking great coffee in LA, the two branches of this place are worth seeking out. They specialise in ethically sourced beans, soft brew techniques and beautifully designed interiors. Other notable places to eat along Abbot Kinney include Plant Food & Wine, an upmarket vegan restaurant, and Shima, who, in this health-obsessed part of town, do a roaring trade in their famous brown rice sushi. 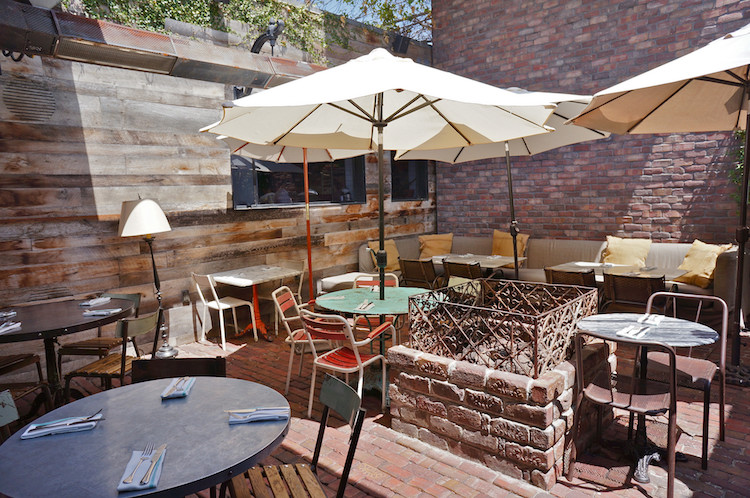 Tearing myself away from all the indie mags at Intelligensia, I was on the move again, looking to pick up a few gifts to bring home. If you're looking for one-offs and lesser-known brands, Abbott Kinney is a great place to shop. I fell for the soft seamless singlets at Avocado Wear, where I browsed while soothing sounds emanated from the incense-infused yoga class out the back. There’s an outpost of SoulCycle here too, naturally – though you need to book in for its spin-cycling meets dance-party meets life-coaching in advance.

I managed to say no to a heck of a lot of crystals, despite several retail assistants offering smooth, rehearsed reasons why I really needed them in my life. Ditto dreamcatchers – handcrafted, from small to unwieldy, often also bearing glinting crystals in their web. There were prints and paintings by local artists, $300 organic cotton trackpants, and plenty of vintage gear. But I did fall for all the Scandinavian wares at design store Huset, and haemorrhaged a good whack of cash there.

At the far corner of Abbot Kinney, I had a nosey around the Venice branch of cult wholefoods store Erewhon and was instantly charmed. But somehow I still managed to follow that up with a donut and filter coffee. Good ones though – the best! Bluestar Donuts started in Portland and its first LA branch is here in Venice Beach. They do flavours like blueberry &  basil and maple & bacon, and specials just for this sole LA branch, including rose rosé hibiscus. But I went for simple; the orange & olive oil did not disappoint. They also serve very decent Stumptown filter coffee.

The shops tapered off but I kept walking. I knew the beach was not far away and soon enough a handpainted sign on a cute terraced house pointed the way. What a weird place Venice Beach is. I was at the tail end of it, the street performers felt more menacing than merry, faces were grey rather than golden and the weather was blustery – it was winter and LA was in the midst of an atypically wet spell. It felt quite unlike the sun-drenched, lively Los Angeles beaches we see on screen. I needed respite but nowhere looked promising until a bar came into sight. The outside of the Venice Ale House looked a bit battered, the result of a life spent warding off the salty wind. But inside there was craft beer – more than I’ve ever seen in a place this small and almost all of it made locally – and a kitchen serving organic fare, with loads of vegetarian and vegan options (even if most of it was fried). 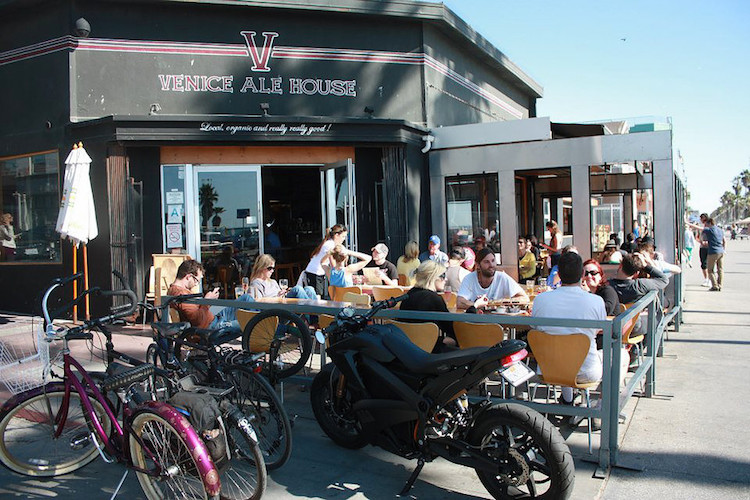 I ordered a pint and got chatting to the other folk sitting up at the bar; I liked this spot and sat for a bit imagining how fantastic it must be with one of those violet and apricot California sunsets on the go. But today, my first ever walk along Venice Beach had me a little rattled, especially after the ease and style of Abbot Kinney. In this big, complicated city, Abbott Kinney like a haven, at once familiar to a smaller country-person, yet also quirky and novel. I finished my beer and booked an Uber back to my hotel, and waved this end of the Pacific Ocean goodbye. 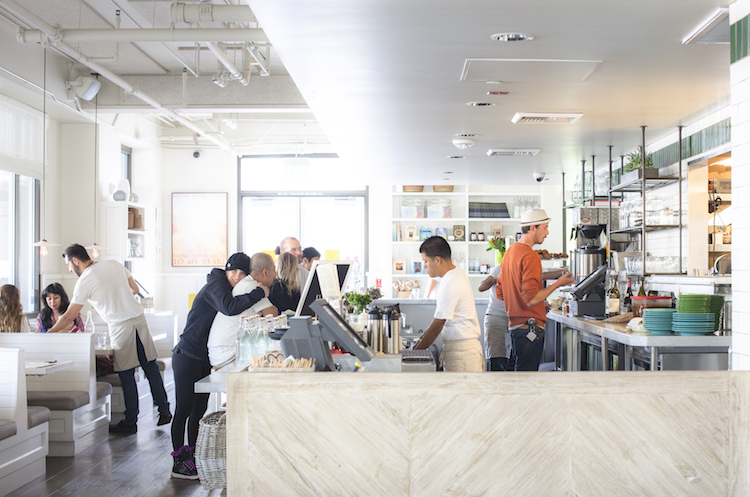 Other places worth getting to on foot in Venice Beach

On Lincoln Boulevard, The Golden State is a cute and eclectic lifestyle store selling everything from locally made preserves to artsy boutique publications, vintage Levi’s and porcupine finger-puppets. The garden out back plays host to things like indigo-dyeing workshops.

Café Gratitude is big on the celeb scene, proffering mantras alongside vegan, raw, organic things to munch on.

Rose Café is a Venice stalwart which reopened last year after renovating. It’s certainly a bit fancier than it was, but it’s roots are still in Southern Californian fare, with a cruisy vibe and plenty of outdoor seating.

Moonjuice is the wholefoods store of Amanda Chantal-Bacon, whose bizarre diet went viral not long ago. A visit here will confirm she wasn’t joking, and you can pick up the Moon Dust which goes into Gwyneth Paltrow’s much talked-about $200 smoothie.