Why you should definitely cruise with your young children

I was told I must be crazy so many times when I told people I was taking two children under five on a cruise from Auckland to Sydney, I started to think I was.

So prevalent are the myths around toddlers and cruising that I was met with horror most of the time when I shared my holiday plans. It was only after I returned, sun-tanned and more relaxed than I’d ever been in my life, that I started trying to recruit other parents to the cruising with young kids club!

Most people know that cruising is great for older kids, but they seem to think it doesn’t suit very little ones. I thought it was high-time to point out why I think cruising with littlies is wonderful, so wonderful I’d call it the best holiday you can have with under-fives. I have cruised out of Auckland three times with my children ranging in age from one to five. Each time we’ve had a fantastic holiday. And here’s why:

It’s the laziest holiday you can have with children

When we sailed with P&O to Vanuatu I spent three days lying by the kiddie pool while my children swam for hours. Their record was six straight hours in the paddling pool. It is so easy to entertain your kids if they’re waterbabies. You don’t even have to get off the boat for your kids to be entertained. The wonderful staff at the kids club often bring out balls and toys and Lego so kids can play on the deck in the sunshine while their parents have a sneaky margarita. You don’t need to do anything fast on a cruise boat. 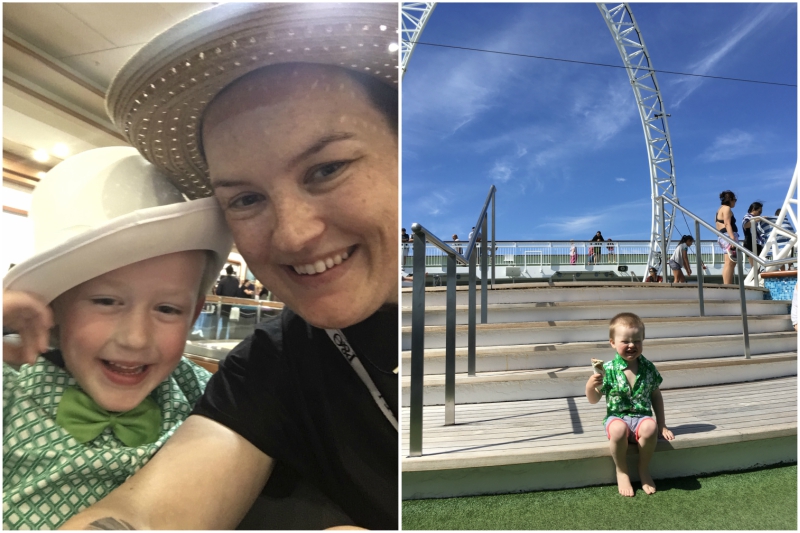 The best holiday with children ever. (Photo: supplied)

Your kids will sleep on a boat

My kids both slept through the night for the first time ever on a cruise boat! The rocking just knocks them right out. They crashed so easily and for the first time had day naps. We got into a great “at sea” routine with the kids where we would get up early and have breakfast, have a huge swim and then lunch. After that we’d take them back to their rooms for “quiet time” and they’d conk out for at least two hours. Time doesn’t matter on the boat because there is so much to do in the evening that they’re still exhausted by 8pm. You can take them to one of the fantastic shows in the evening and it’s such a sensory overload you’ll be carrying them back fast asleep once the show is over. 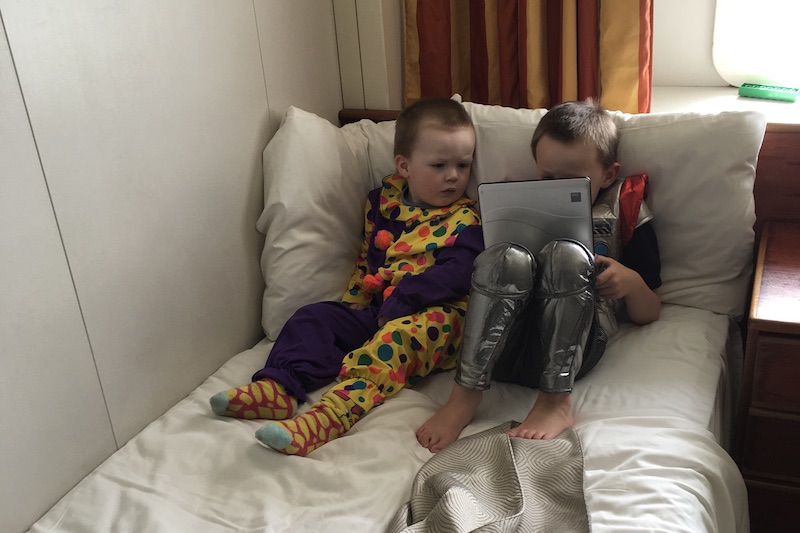 The boys in their bunk, where they slept, a lot. (Photo: supplied)

Remember going to restaurants? That thing you did before you had kids? That thing that you try to do now and people scowl at you as soon as you walk in and wait patiently for your child to even squeak so they can complain? Well, on a cruise boat you can do fine dining WITH children. It’s amazing. Each night we booked and ate at the restaurant. It was so fancy – three courses, they take your jacket off you, it’s the full service. And they love kids! Everyone is nice to kids. Even fellow guests are kind to children because many are grandparents or parents themselves. We loved eating out every night – and it’s all part of the price. We got to feel like grown-ups and the kids learned to eat nicely in a restaurant. They loved their waiter and drew him pictures to take home once they left the cruise. 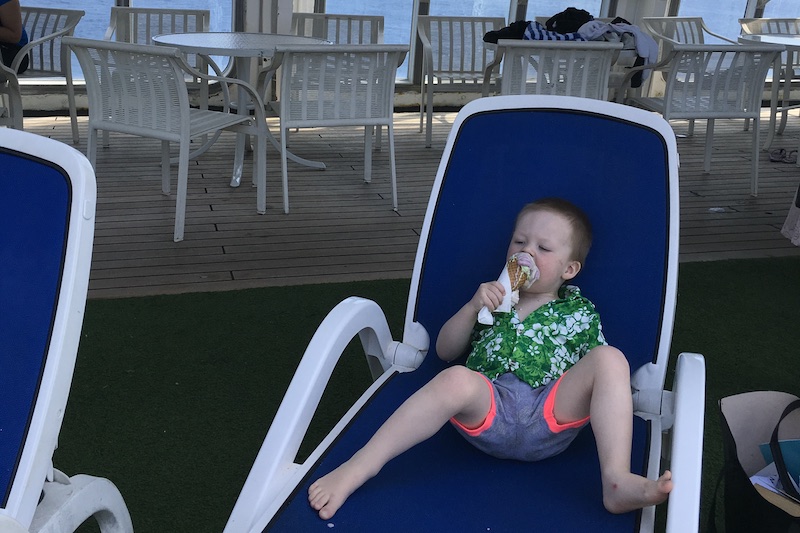 The kids love the food on the boat, and you will too. (Photo: supplied)

You can have time out

Because there’s so much for kids to do on the ship my husband and I were able to give each other time out each day. He played bingo sometimes twice a day which he found surprisingly extremely relaxing. I had a massage and ended up even getting my hair cut because there’s always a fully catered spa and hair salon on board the ship. My mother-in-law who came with us loved the art history shows on board and would walk around with the baby asleep in the pram while she watched cooking demonstrations. There’s an adults-only deck where my husband and I would retreat while my mother-in-law watched the boys. There’s something for the whole family no matter the age. 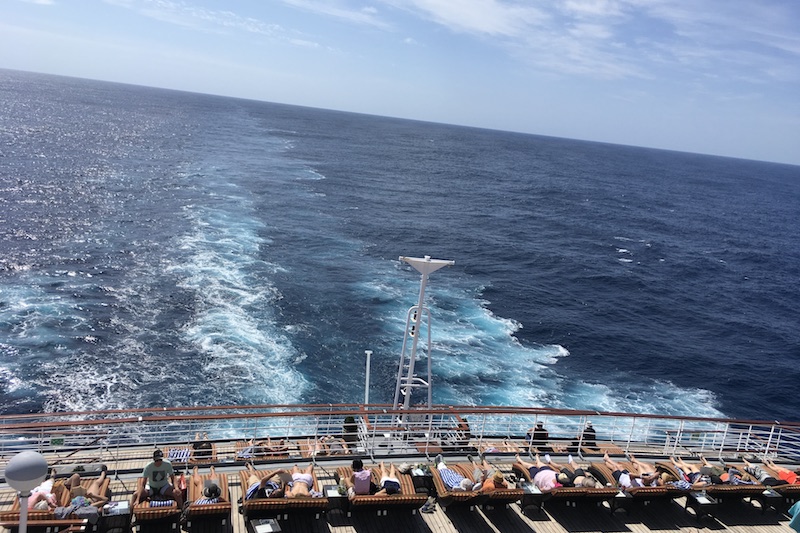 Take time to relax while your kids are distracted. (Photo: supplied)

Cruising is an adventure

We loved having a holiday that was truly catered to the whole family. The kids loved watching us leave Auckland from the window. They met the captain. They did treasure hunts and learned how to say hello and goodbye in the languages of all of the fantastic staff. They ran up and down the hallways expending all of their energy and made friendship bracelets and took dance classes and watched magic shows. They saw volcanoes from their windows, seabirds, rough weather and shipwrecked shores. They met people from all over the Pacific. All for trips that were cheaper than flying return to that destination. Best of all – we had time just with each other. We ate together four times a day (we always had jelly mid-afternoon because why not?) and we saw shows together, we swam together and watched movies together on the big screen as the sun set behind us. It’s the most blissful holiday you can have with babies. 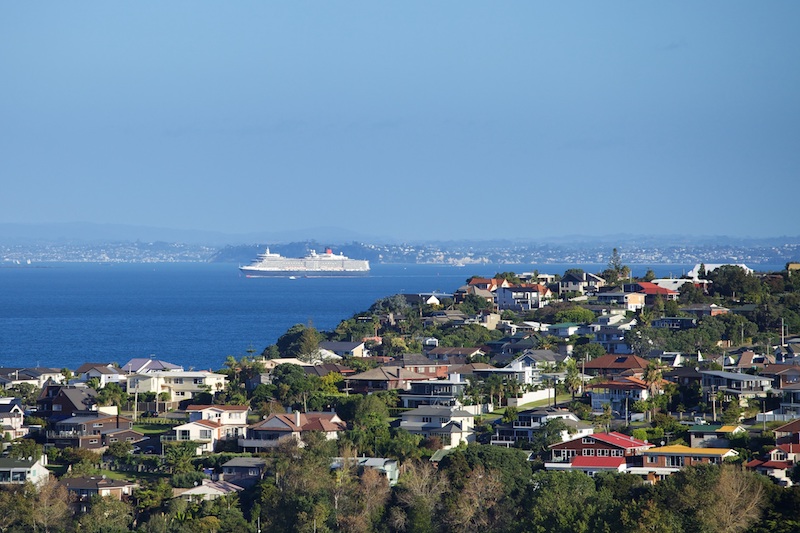 Emily Writes is a mother of two who lives in Wellington. She is the editor of The Spinoff parents and the author of her book Rants in the Dark.