The darling of cruise ships, this is a Caribbean Island that proudly embraces tourism. Go with the flow and allow yourself to be born again on St Thomas, a US Virgin Island. 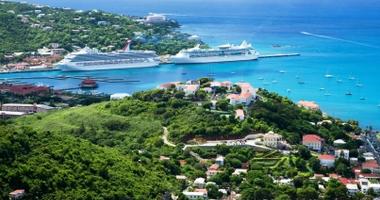 After being spotted by Columbus on his second journey to the region in 1493, it was the Dutch who first established a colony on the Island of St Thomas in 1657. The Danish subsequently took control nine years later and held onto power until they sold the Islands to the United States in 1917 for $25 million in gold. The residents were granted US citizenship in 1927. Today St Thomas, together with Saint Croix and Saint John, are collectively known as the US Virgin Islands.

Take the St Thomas Skyride to Paradise Point for the spectacular views over the island. While on the summit enjoy the walking trails to admire the local flora and the native birds. Once back at sea level, have a wander around the picturesque Charlotte Amalie Harbour. History enthusiasts will appreciate Fort Christian that was built during the seventeenth century, while nature lovers will enjoy Coral World, an aquarium focusing on marine life from the Caribbean.

Nothing quite equals the experience of drinking coconut milk direct from the coconut on a Caribbean Island.

The island boasts the oldest synagogue in the United States.

The locals speak an English-based Virgin Islands Creole. We like the phrase, “time longer dan twine.”

This is a great shopping destination with imported items free of duty and excise.