Nuremberg is a charming Bavarian city that effortlessly blends medieval with modern. This German gem boasts quaint Tudor houses, a distinguished castle and comes alive during its famed Christmas Markets. 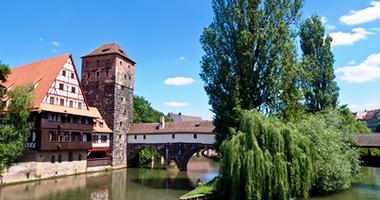 The second largest city in Bavaria, Nuremberg is located north of Munich on the Pegnitz River and the Rhine-Main-Danube Canal. The now vibrant town was once referred to as the unofficial capital of the Holy Roman Empire and was the site of Nazi Party conventions, commonly known as the Nuremberg rallies. Following World War II, war criminals were bought to trial in Nuremberg in what was subsequently called the Nuremberg trials. Life since this tumultuous time has recovered and residence in Nuremberg enjoy a peaceful life within a quaint yet modern city.

Nuremberg cruises disembark at the Port of Nuremberg, located 6km from the Main Railway Station.

Most visitors to Nuremberg will inevitably make their way to the Reichsparteitagsgelände which is the site of the Nazi Party rallies and a museum of the event. Needless to say it is a sobering and informative landmark that history buffs will benefit from. For something a little lighter, take a stroll along the Pegnitz Banks where you can take in Nuremberg's beautiful buildings, cafes and views.

Bratwursthäusle is the place to eat Nuremberg's classic beech-wood grilled bratwurst sausage while overlooking the Hauptmarkt.

Visit Nuremberg Castle with its beautiful sandstone. The structure is made up of three different sections and towers over the city.

When sitting down for lunch with locals make sure to say Guten Appetit, which translates to 'enjoy your meal'.

Nuremberg is known for its famous toy makers. Take home a unique doll, teddy bear or puppet as a keepsake for your trip.