Where to go in Japan the second time round

So you’ve been to Tokyo, Kyoto and Osaka. Where to now? Here are five more destinations worth a visit.

If you’re an art aficionado, you’d be amiss not to stop by the remote island of Naoshima, home to some of the best contemporary artworks and galleries Japan has to offer. Thanks in large part to art-loving Japanese businessman Soichiro Fukutake, Naoshima has transformed since the 1990s into a cultural hub for contemporary art.

One of the highlights of Naoshima is Chichu Art Museum, designed by Japanese architect Tadao Ando. Built into a hillside overlooking the southern coast of Naoshima, the museum famously houses a set of large murals from Claude Monet's ‘Water Lilies’ series and James Turrell’s ‘Open Sky’. 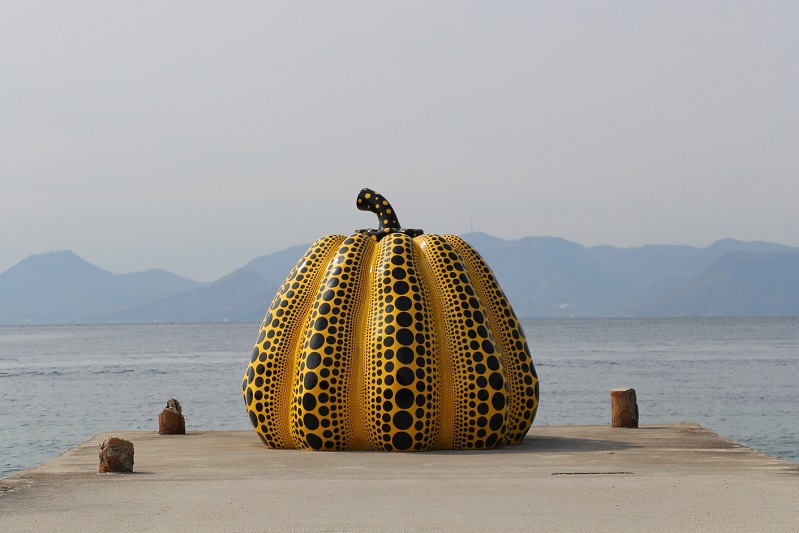 Despite being Japan’s second largest city, seaside Yokohama often gets neglected by many first time visitors who prefer to stick around nearby Tokyo. But the city has its own unique charms worth exploring, with Yokohama’s more laidback atmosphere being a major drawcard for both locals and tourists alike.

A great place to start your explorations is Minato Mirai in central Yokohama. A shipyard-turned-urban area whose name means "harbour of the future", Minato Mirai is a modern spectacle, home to everything from massive skyscrapers and illuminated Ferris wheels, to a museum dedicated entirely to the humble Cup Noodle (you can even try your hand at making and designing your own instant ramen meal).

Yokohama is also home to Japan’s first and largest Chinatown. Red and gold lanterns dangle over narrow lanes lined with over 500 restaurants – perfect for when you find yourself craving some steamed buns or spicy noodles. 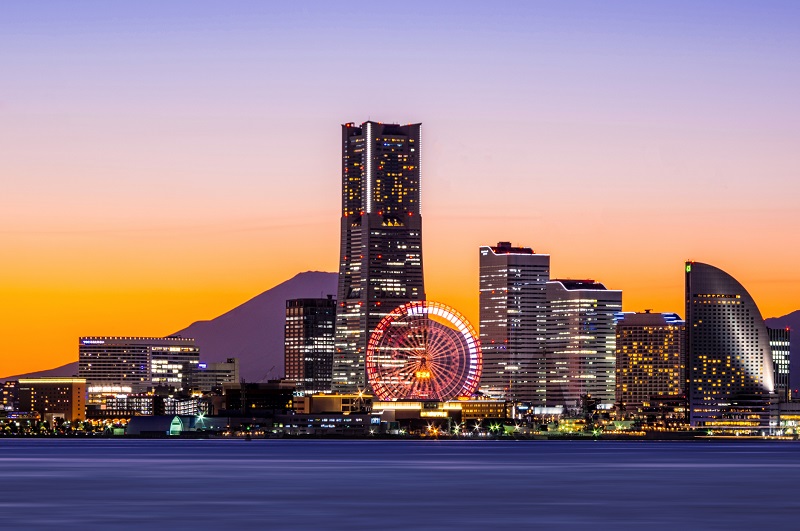 For nature lovers, picturesque Furano at the centre of Hokkaido is the perfect place to visit all year round. In winter, Furano becomes a ski town, while in summer it’s all about hiking, cycling, and fresh produce.

In July, during the height of summer, Furano’s iconic lavender fields are in full bloom, blanketing the town in a sea of periwinkle. Afterwards, take a break at one of the many cafes located nearby which serve a distinctively purple-looking soft serve ice cream laced with lavender extract.

A bit further from Furano but definitely worth a visit is Blue Pond, a magical and mysterious man-made pond with water the most striking shade of cobalt blue. 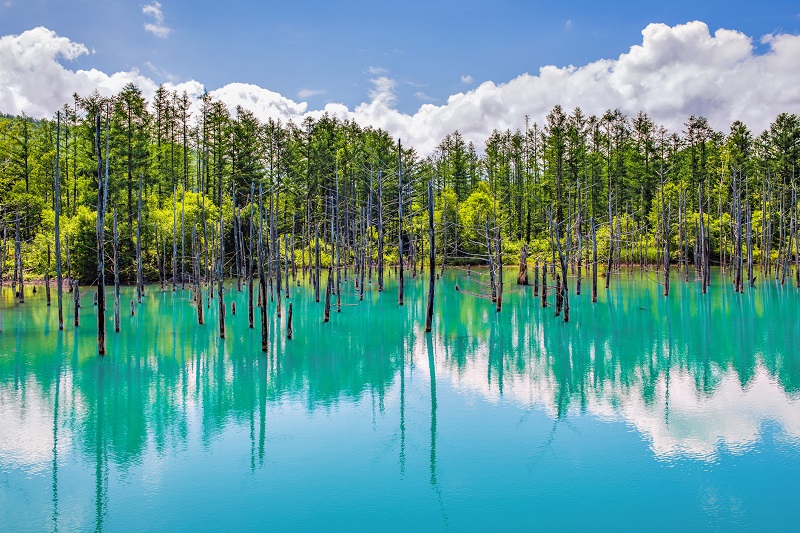 Located just 50 km from historic Hiroshima, Ōkunoshima (aka ‘Rabbit Island’) has soared in popularity in recent years thanks to viral videos of its furry inhabitants.

There are over a thousand bunnies roaming freely on Rabbit Island, although how they came to be remains a bit of a mystery. Some believe they’re the descendants of ‘test’ bunnies used for poison gas experiments. Others believe a group of them were released by school kids back in the 1970s. However they arrived, with no predators to worry about, they multiplied dramatically, quickly overtaking the small island as their own.

Rabbit Island’s bunnies are friendly and approachable, no doubt used to the fawning attention they get from humans who stop by with snacks. Since Ōkunoshima is light on amenities, make sure to grab some treats before you arrive to feed to the bunnies, who’ll shower you with love in return for a carrot or two. 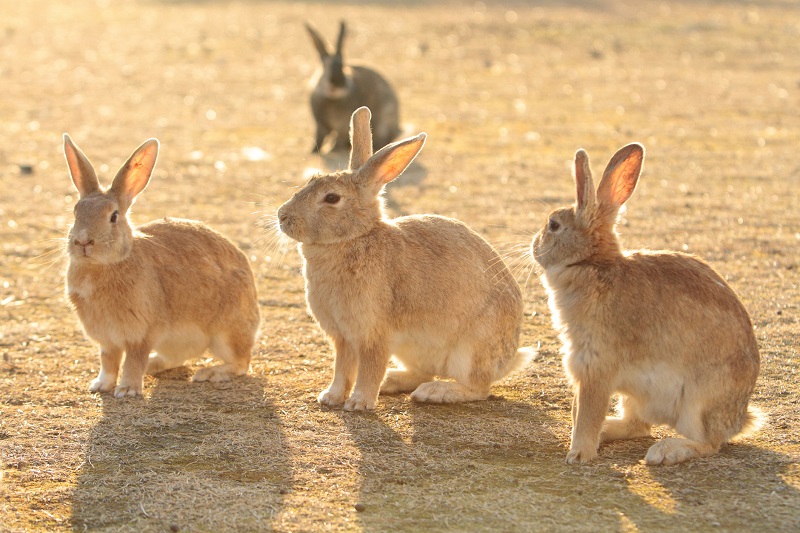 It’s clear that Japan is a haven for those who love to experience the unlikeliest of animals up close: Ōkunoshima’s rabbits, Aoshima’s cats, and Nara’s deer. At Nara-koen park, almost 1,200 of these tall, languid creatures roam freely in peace. Deer crackers are for sale around the park, and some deer have learned to bow to visitors to ask to be fed.

But deer aren’t the only thing attracting thousands of tourists to Nara every year. As Japan’s first permanent capital, it’s home to a rich collection of temples and shrines filled with elaborate Buddhist art. Highlights include the spectacular Todai-ji Temple where inside you’ll find the famous Daibutsu (Great Buddha), one of Japan’s most famous icons. 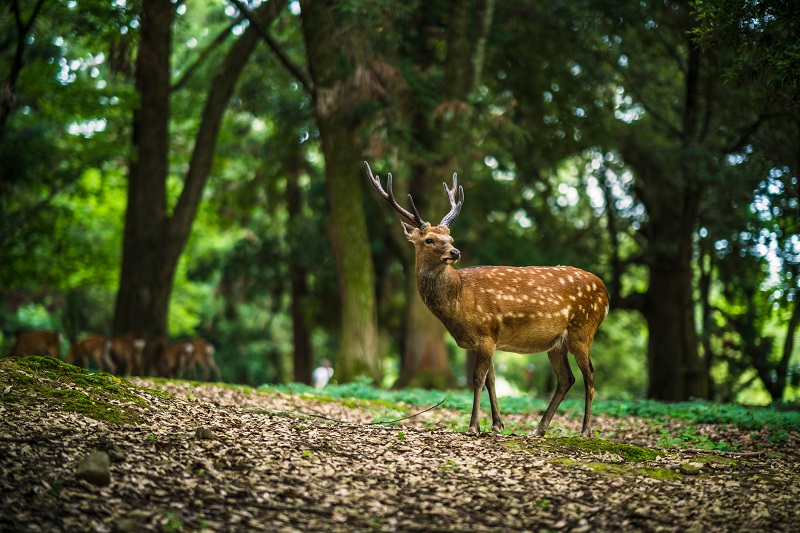