Cycling Atlanta's BeltLine, a new green route through one of America's most car-centric cities

The roads of Atlanta are wide and clogged, and its public transport system is much maligned. It’s a car city. But, slowly, in a vast circle around the city, a regeneration project is helping put people back on foot and on bikes. The BeltLine is not just changing the way the city moves, but the way the city looks. Greg Bruce went exploring.

My hotel had loan bikes and the road outside had a dedicated bike lane running the few hundred metres to Piedmont Park, which then segued into the BeltLine. The concierge asked me if I wanted the lime green or black bike and I looked at her briefly to see if she was joking.

I rolled down to the park where, enmeshed in its multiplicity of paths and junctions, I felt a vague anxiety about all the decisions before me but, once on the BeltLine – the  warm, early morning wind of freedom in my hair – that feeling disappeared. I still didn’t know where I was going but I knew it would be somewhere along the BeltLine.

The BeltLine whispered in my ear: ‘You can only go straight ahead, and if you don’t like going that way, you can turn back.’ It said: ‘You do not have to make hard choices; I will make them for you.’ It said: ‘I will show you new and wonderful things. All you have to do is follow me.’ I fell for the BeltLine hard and instantly.

The BeltLine, or at least the Eastside segment I was on, was opened in late 2012 and is a trail for walkers, runners, people on bikes and people with yoga mats to share. It’s just one tiny part of a greater project which should be completed sometime around 2030, encircling the city with 53 kilometres of paths. 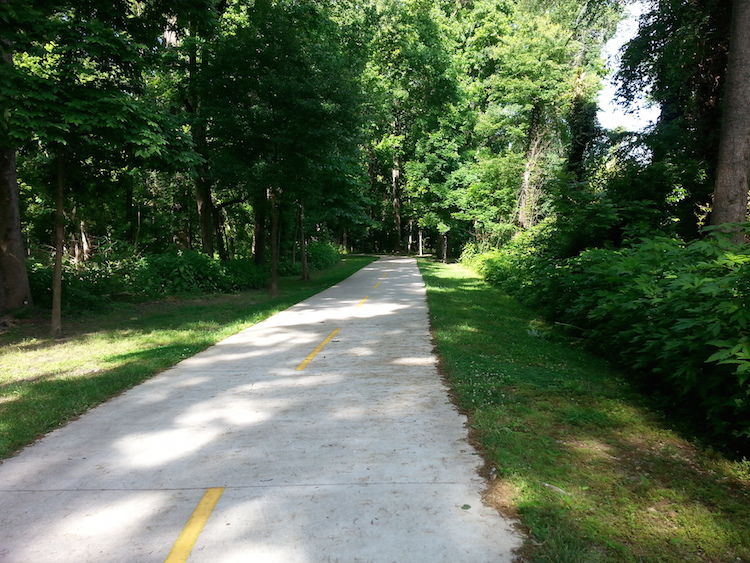 Soon after riding onto its smooth white concrete path, I became aware what a difference this particular 3 kilometre strip of pavement and greenery on a disused railway line had already made to the city. This city’s interactions had long been mediated by roads and cars, but now its people were being encouraged to open up and connect as humans.

A local told me that the whole project was conceived by a student at Georgia Tech, the local university. It sounded like the essence of urban myth, but it’s true. His name is Ryan Gravel.

As a visitor, it filled me with joy to be with all these people on this brilliant clear morning. I felt connected to the city and to this symbol of its change, whilst being funnelled from its commercial and tourist heart to its regenerating inner suburbs, the regeneration of which was being driven by the BeltLine.

As I rolled easily along on my wide-handlebarred cruiser, I could see the developments flourishing on the edges of the Beltline: the springing up of cool junk stores in ramshackle buildings just steps from the path and the opening of great restaurants like Rathbun’s and Ladybird Grove & Mess Hall, and the fancy food stall conglomeration at Krog Street Market.

Everywhere, there was art: surprising little projects and big ones too, encouraging you to stop and think about the nature of this place, and about this life, and sometimes encouraging you to just stop, when otherwise your inclination is just to keep going.

I could feel both the regeneration that had already happened here and the possibility of more. It opened my mind as it cleared it. Let’s not be reductive and say that travel is about openness, but let’s acknowledge openness and its importance. The BeltLine is an opener and enabler of unplanned experience.

Paths regularly sprouted from the BeltLine and into the surrounding neighbourhoods. I took one and spent a bit of time riding around the super cool suburbs of Inman Park and Little Five Points. It was too early for many of the shops to be open, but I found a great coffee at a place called Aurora and when I was leaving a woman driving a truck beeped at me and yelled out the window: “You know where the pot shop is?”

“I don’t, sorry,” I said. “But if you’re looking to expand your mind, jump on a bike and follow me.” I never said that second bit – I’m not an idiot, or a zealot – but I think it would have been a valid point.

To find out more about the Atlanta Beltline, visit beltline.org.