From its earliest days when traders and frontiersmen patronised burlesque venues and makeshift play halls, Chicago's nightlife has been renowned for its energy, excitement and diversity. Today the city offers a head-spinning array of entertainment options, adding up to a scene which easily rivals that of New York and LA.

As the home of artists including Kanye West, The Smashing Pumpkins and, yes, the band Chicago, it's hardly surprising that Chicago has an extremely robust live music scene. Venues run the gamut from under-the-radar dive bars to grand, historic theatres like the Riviera (built 1917) and the Aragon Ballroom (1926). Who's playing in Chicago this year? Pretty much every popular musical act in the world today: The Who, Radiohead, Janelle Monae, Neil Young, Beyonce, Billy Joel, Billie Eilish, hometown boy Chance the Rapper... the list goes on.

While big concerts take place throughout the year, summer is undoubtedly Chicago's major live music season. The highlight has to be Lollapalooza, the legendary music festival that has been a Chicago summer mainstay since 2005. Taking place in Grant Park over four days in early August, this year's festival features the Weeknd, Jack White, and Bruno Mars, among many, many others. Other big summer events include EDM festival Spring Awakening, the alternative-rock focused Pitchfork Festival, and metal and hard rock fest Chicago Open Air. 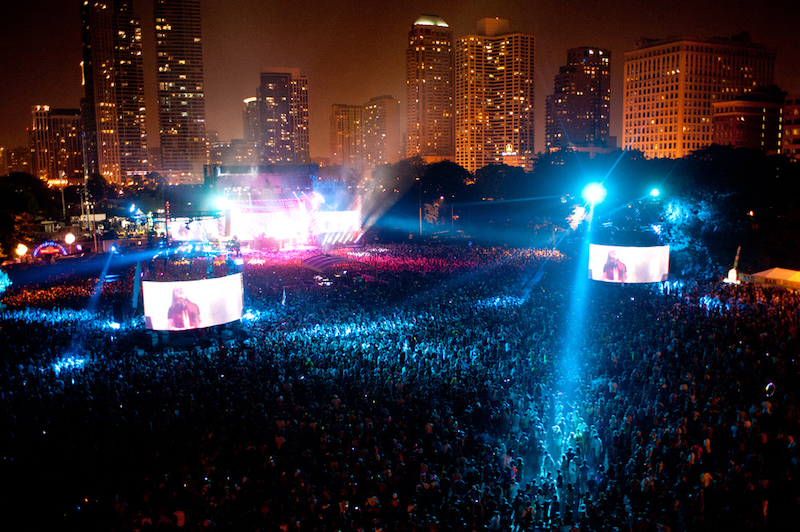 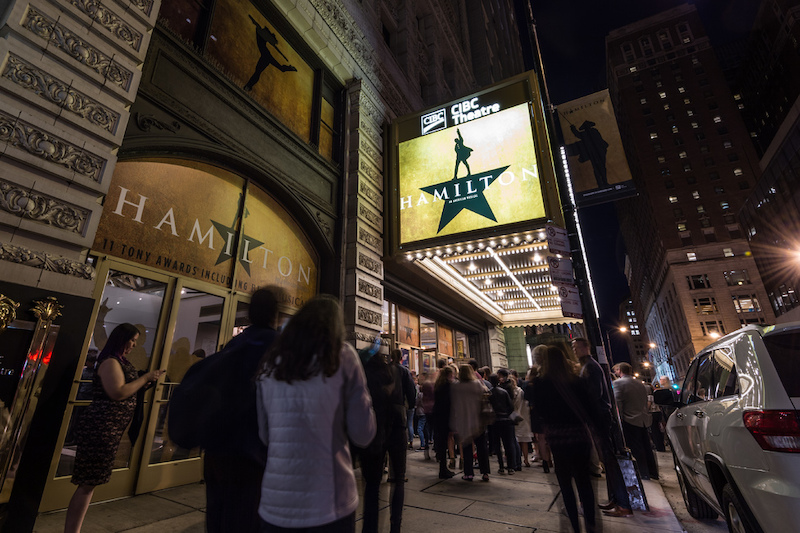 Always dreamed of seeing Hamilton live on stage? Buying an expensive ticket to the original Broadway production in New York isn't your only option. The sensationally popular hip-hop musical has been playing in Chicago since September 2016, a year after it first opened on Broadway. It's an identical production with similarly talented performers, and tickets – while still far from cheap – are a little easier to get your hands on than in New York. Don't miss the new Hamilton: The Exhibition either. This immersive multimedia spectacle, recently opened by Hamilton creator Lin-Manuel Miranda himself, is a must for fans of the stage show. 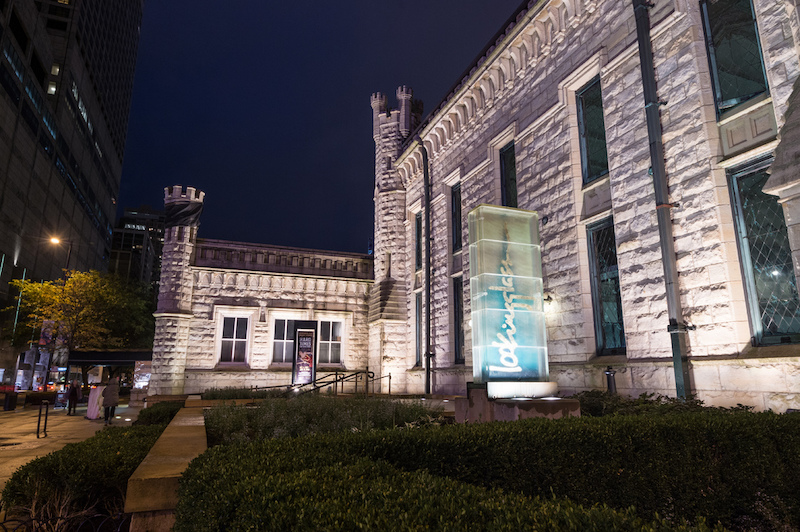 Hamilton is just one of the many stage hits currently playing in Chicago's opulent theatres. Other productions this year include Cats, Disney's Frozen, White Christmas and Dear Evan Hansen (see broadwayinchicago.com for more details). There's more to Chicago theatre than just the big touring spectacles, though. The city is home to the acclaimed Steppenwolf and Lookingglass theatre companies, along with a vast array of mid-size venues presenting superb productions every day of the week.

Ask any comedy nerd which groups have had the biggest influence on the history of comedy and The Second City will be one of the first they mention. The legendary theatre, located in Chicago's Old Town neighbourhood, is most famous for its improvisational comedy troupe, which has been making audiences howl with laughter since 1959. Past Second City members are a who's-who of American comedy, including Tina Fey, Steve Carrell, Mike Myers, Stephen Colbert and Jane Lynch. The Second City complex now boasts four separate theatres presenting a range of comedy styles from pure improvisation to classic sketches from the organisation's 60 year history. Want more comedy? Head to The Laugh Factory for standup and iO Theater for more excellent improv There aren't that many cities whose names have become synonymous with an entire genre of music, but Chicago is one. Raucous, electric-guitar-heavy Chicago blues was born here in the middle of the 20th century, when artists like Muddy Waters and Howl-in' Wolf migrated north from the southern United States. The spirit of the blues is kept alive at clubs such as Blue Chicago, the House of Blues' Back Porch Stage, and Buddy Guy's Legends, founded by the Chicago blues icon himself (visit in January to catch Guy playing his annual series of concerts in the venue that bears his name). In June, blues fans from around the world descend on Millennium Park in the heart of the city for the free annual Chicago Blues Festival, this year featuring stars like Charlie Musselwhite and Bobby Rush. 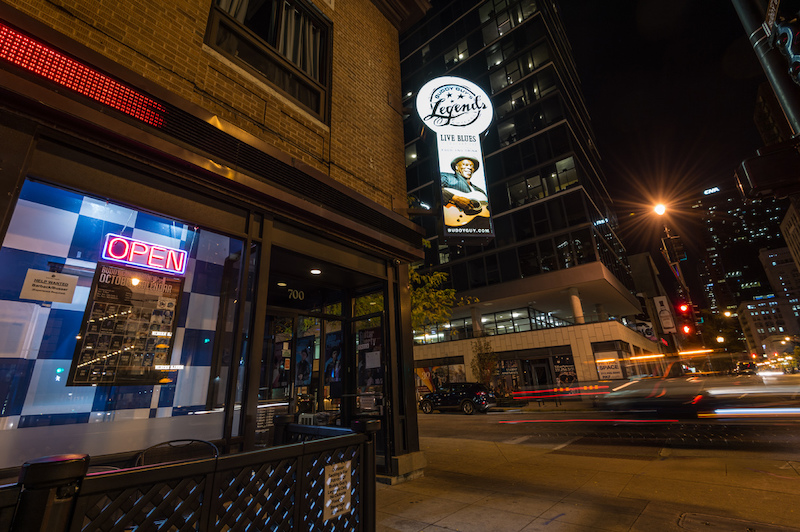 Chicago's jazz history goes back even further than blues, and it's still a mainstay of the city's music scene today. You'll find authentic, atmospheric jazz clubs all over the city – try The Green Mill (a favoured haunt of Al Capone in the 1920s), Andy's Jazz Club, Jazz Showcase, or FitzGeralds, one of the few remaining places in the city to regularly showcase big band jazz. The hugely popular (and free) Chicago Jazz Festival takes place over 10 days in late August, while the Hyde Park Jazz Festival (also free) at the end of September celebrates “jazz’s great legacy and bright future” in Chicago's South Side. The Hyde Park Jazz Festival is an annual celebration of jazz in the South Side of Chicago. Photo: Choose Chicago

A night out in Chicago can be whatever you want it to be. If you're not in the mood for theatre, music or comedy, don't worry – there's still a ton more options. Catch a magic show at the beautiful Art Deco-style Chicago Magic Lounge or at the Magic Parlour, housed inside the historic Palmer House Hotel. Get a ticket for the Joffrey Ballet, among America's top dance companies, or the Chicago Symphony Orchestra, hailed as one of the greatest orchestras in the world. On that note – classical music fans should try to time their visit to Chicago to coincide with the Grant Park Music Festival, a series of 30 free concerts held in the open-air Jay Pritzker Pavilion in Millennium Park. Chicago summer nights are warm and inviting – what better way to enjoy them than with an al fresco concert with the city skyline as a backdrop? 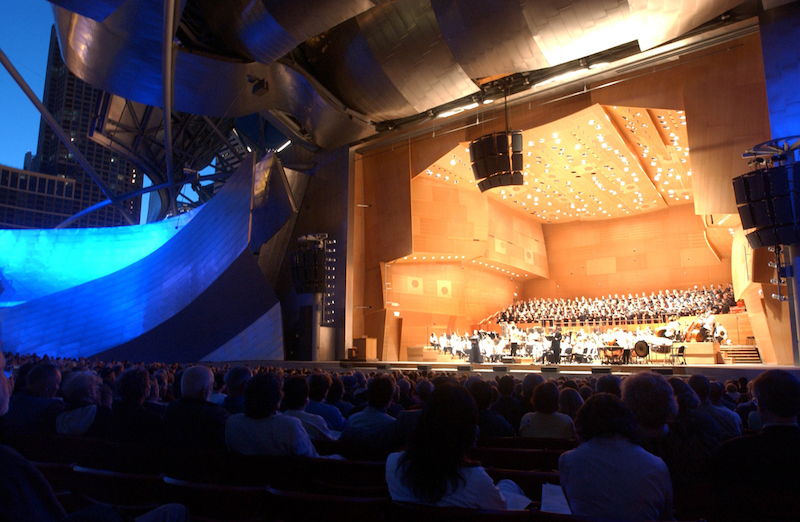