This year the famously exciting city of Rio de Janeiro is in the international spotlight, thanks to a certain global sporting event it's hosting in August. New Zealand journalist Laura McQuillan, who has been living in Rio since April 2015, shares her insider guide.

He’s the cherry on top of the strangest open home imaginable: a tour of Rio de Janeiro’s Santa Marta favela.

On the long drive from the international airport to the city’s south zone, you spot near-identical favelas - red bricks and concrete slabs with tin roofs, stacked atop each other - clustered on the city’s hillsides, the first built by recently-freed slaves in the late 1800s. This year, in the land famous for Carnival, açai bowls, caipirinhas, palm trees and an enormous Jesus statue, favelas are the hot drawcard for tourists wanting a different holiday experience.

Santa Marta is equal parts famous for appearing in the Michael Jackson's 1996 video for ‘They Don’t Really Care About Us’, and its more recent brightly coloured paint job. Seven years ago, it became the first favela “pacified” by police. And today, tourism is booming.

Entering Santa Marta, I was apprehensive - not because of the notorious ‘City of God’ reputation that still swirls over Rio’s favelas, but because it’s a bit like a human safari tour. That’s exactly what Brazilidade’s Sheila Souza wants to change.

On a three-hour tour down vertiginous concrete paths - past churches, the samba school, bars, hairdressers, stores and police stations - the lifelong Santa Marta resident explains the favela’s chequered history and the delicate relationship between its 8000 residents, politicians, and the stony-faced cops who stalk the alleys, assault rifles at the ready. 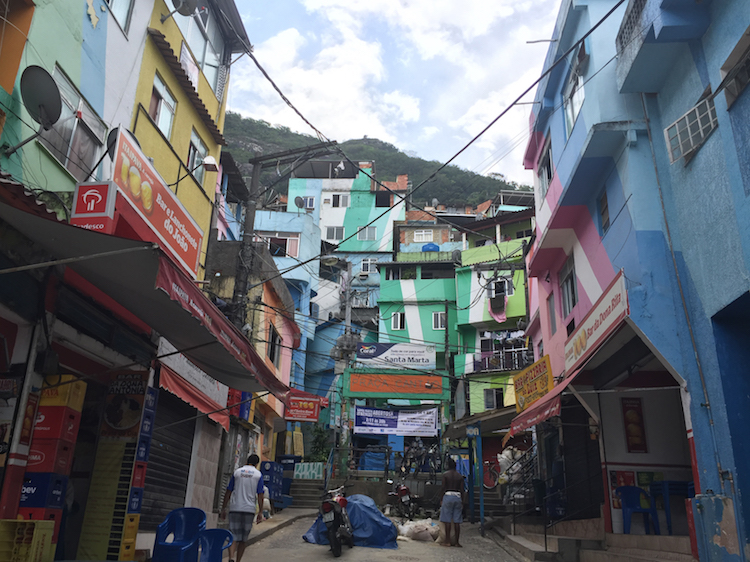 Other favelas have followed suit on the tourism front: foreigners are flocking to stay in Vidigal, renowned for having the best beach views in town, while Babilônia favela is a weekend party destination for locals and visitors who stay up the hill to watch the sun rise.

BRAZIL IS NOT FOR BEGINNERS, bossa nova star Tom Jobim quipped decades ago, and today, challenges remain for a tourist.

Few of Rio’s Cariocas speak English, you can’t drink the tap water or flush your loo paper, and crime is a real problem. There’s not much of a foodie scene, and shopping is probably off the cards, unless you’re in the market for a fluoro lycra onesie.

But since before Lola was a showgirl, sunseekers have been undeterred, flocking to the pulsing palm-lined beaches of Copacabana and Ipanema, where thong bikinis are de rigeur. For the blokes, it’s tiny shorts that make Dan Carter’s Jockeys look modest. 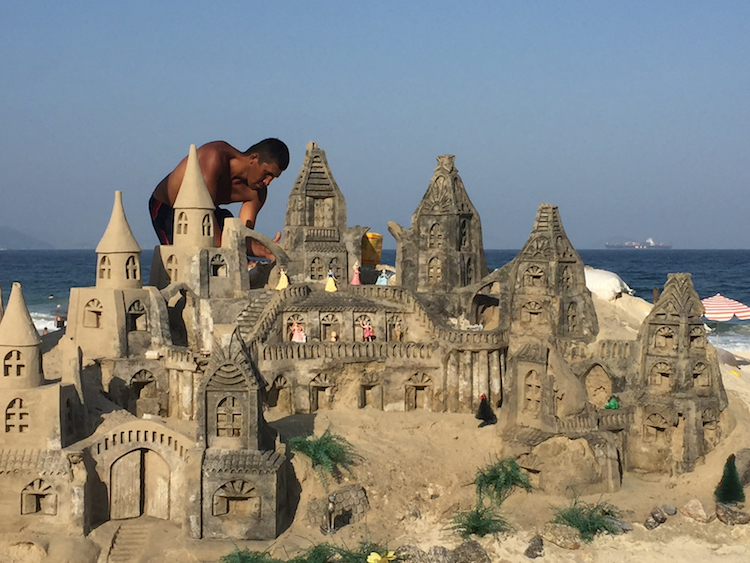 Copacabana not a relaxing place: shoreline salesmen shout “caipirinha, caipirinha!” as they flog everything from sarongs and fedoras to hot pastries, iced tea and fried cheese on a stick, to thousands of beachgoers.

You can rent a beach chair and umbrella from one of the many barracas (stalls) along the beach, and they’ll deliver cheap ice-cold beer direct to your chair, but if you’re after peace and quiet, head to Leme beach or Praia Vermelha, followed by a beer on the “short wall of Urca” as you watch the sun go down.

THE SHEER NUMBER of watering holes in Rio is staggering: almost every block has a pe sujo or “dirty feet” bar: a hole-in-the-wall serving litre bottles of beer and salgados (the Brazilian equivalent of a service station pie) to middle-aged men who’ve really let themselves go.

One has become an unlikely hipster fave: crowds gather on the street outside Bip-bip, a tiny Copacabana bar filled with seated samba musicians. The curmudgeonly long-time owner frowns upon clapping, and you have to fetch your own beer, yet the customers keep coming. 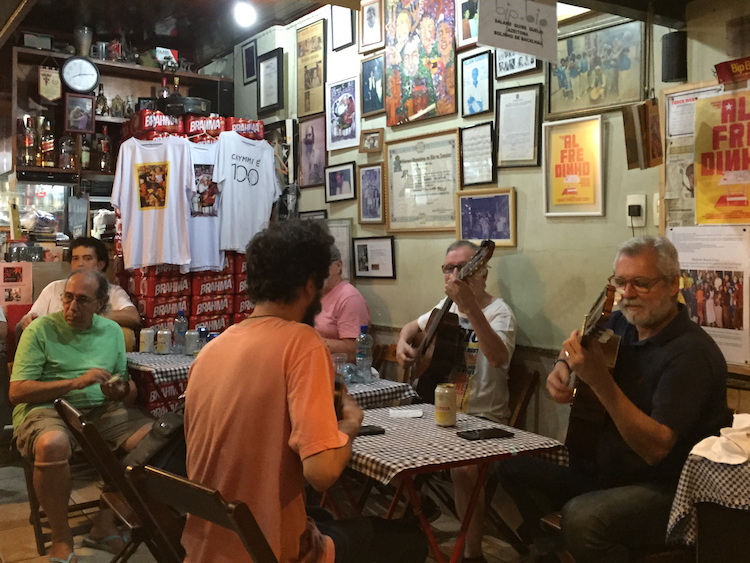 At the other end of the drinking spectrum are the poolside rooftop bar of Hotel Pestana, for spectacular city views, and Ipanema’s Bar Astor, for beachside people-watching. At both, you’ll find the city’s nouveau riche sipping caipivodkas (the classy man’s caipirinha), with the lime swapped for something more exotic: strawberry, kiwifruit, pineapple or passionfruit.

The craft beer scene is blossoming in my favourite suburb, Botafogo - a ‘hood filled with museums, colonial apartments and cool bars, below the heights of Santa Marta. Three of the best are Lupulino for local and international craft brews, and Comuna and Caverna for drinks paired with epic burgers.

This is going to sound hideous, but you mustn’t leave Rio without a Friday night pub crawl through - the Rio equivalent of the Viaduct or Courtenay Place.

First, stop at a stall below the iconic Arcos da Lapa for a very, very strong R$5 (NZD$2) caipivodka, before hitting Bar da Boa for beer, and Bar Leviano for cocktails and some of the best snacks on the street.

Iconic Rio Scenarium should be your final destination - it’s a nightlife institution that’s worth the queue (and the R$40/NZD$16 cover charge) for the phenomenal atmosphere, decor, and samba.

But you needn’t pay to dance the night away: there are plenty of free open-air samba and forró nights in the city’s squares, where a patient Pedro will teach you the moves to different styles of Brazilian dance, hardly blinking an eyelid as you squash his feet.

And now for the bad news: at odds with its prowess in drinking and dancing, Rio struggles when it comes to everyday dining.

There are a handful of standout fine-dining spots (the gnocchi and cocktails at Casa Momus rate among my best-ever dinners). And unlike New Zealand, where buffet is reserved for awkward family birthdays, there’s no shame in “per-kilo” eating in Rio. Two of the best are The Line in Centro and Ipanema’s Frontera.

While meat-eaters will implore you to visit a churrascuria, or Brazilian barbecue, this herbivore suggests the best of the best for three must-try Brazilian foods: pão de queijo (cheesy bread balls) from Cultivar Brasil, an açai bowl at Tacacá do Norte, and a fresh tapioca pancake (I recommend coconut and chocolate) from a Sunday market like Feira da Gloria. 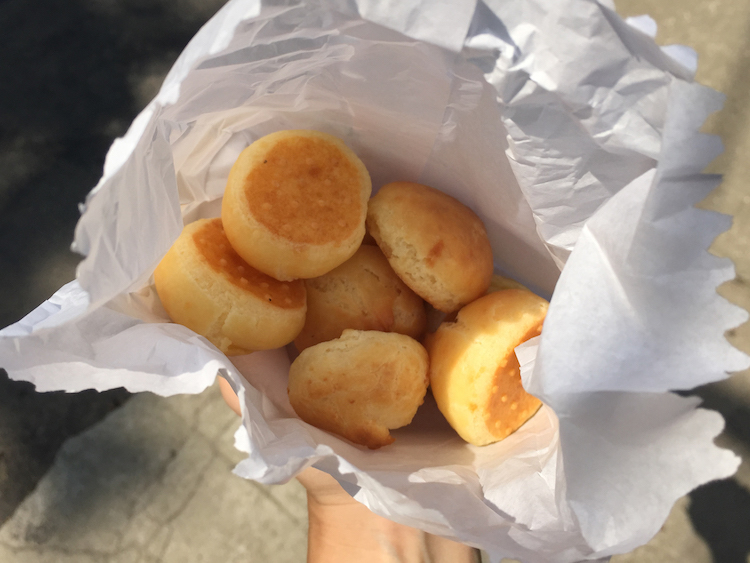 FOR WHAT IT LACKS in the way of hospo, Brazil makes up for in looks: there’s a reason two million people visit Cristo Redentor (the Christ the Redeemer statue) each year.

But you needn’t fork out for a good view: just climb a hill.

That was my idea heading up Morro da Urca, a short but hot and slippery bushwalk up the smaller lump next to famous Pão de Açúcar. The view from the top is a stunner, taking in Rio from the Niteroi bridge, past the white sands of Botafogo and Flamengo beaches, down to Praia Vermelha. 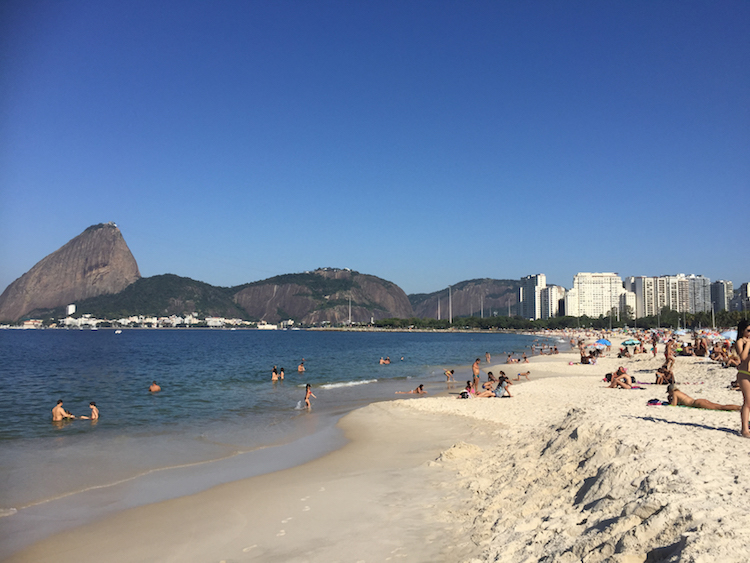 For a greater challenge, there’s the Dois Irmaos, or any number of walks in Tijuca Forest, a reclaimed tropical rainforest with dozens of waterfalls, that’s home to exotic birds and critters, including monkeys. Here, you can hike the Pedra da Gavea, or paraglide above the city off the Pedra Bonita.

GIVEN RIO JUST CELERATED its 450th birthday, it’d be rude not to take a journey back in time through the former Brazilian (and Portuguese) capital.

The colonial influence is still strong throughout the city, in the white tiles that cobble its footpaths, candy-coloured townhouses with wrought iron balustrades, and venerable buildings, squares and fountains (out of order, thanks to water restrictions) that date back almost to the city’s founding.

Among the oldest buildings is the downtown monastery Mosteiro de São Bento (1633) – you have to see the exquisite gilded chapel. Within metres of each other sit the Paço Imperial, home to the Portuguese royal family; 1800s church Igreja Nossa Senhora do Monte do Carmo;  the impressive Palácio Tiradentes, on the site where 18th century revolutionary leader Tiradentes was executed; and the Arco do Teles, an archway to a charming lane where Carmen Miranda once lived. 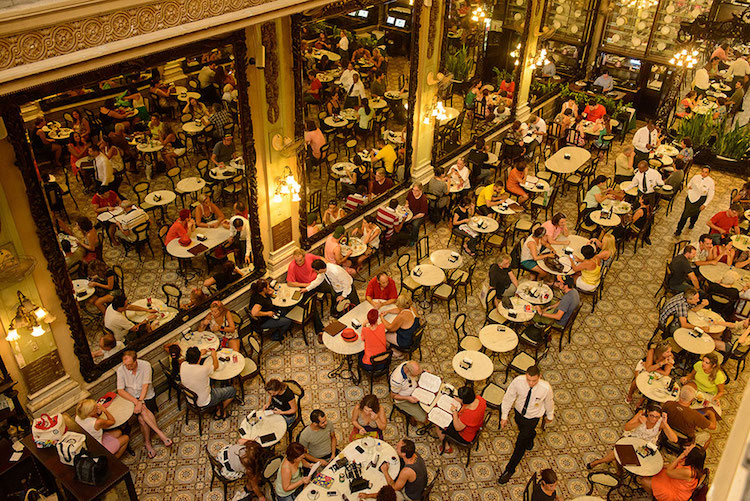 A few blocks away, hidden on a side street between clothing stores, is Confeitaria Colombo, a grand tea room of marble, stained glass and rosewood, which has racked up a rich and scandalous history since 1894.

From Centro, you can catch a tram to charming Santa Teresa, a hilly suburb of macaron-coloured villas once the domain of artists and musicians. While exploring the peaceful winding streets, pop into the trinket shops on Rua Almirante Alexandrino, and to 96-year-old Armazém São Thiago for a beer. Snoop Dogg (right) and Pharrell Williams on the Selaron Steps in the music video 'Beautiful'.

Or if you take the Santa Marta tour, swing by the giftshop: they’ve got favela-themed keyrings, t-shirt printed with artwork by neighbourhood kids, and the keepsake every gringo traveller to Rio seeks: a Michael Jackson fridge magnet.