Train to Trinidad: A journey into the heart of Cuba by rail

Cuba is famous for the classic 1950s cars that still cruise the city streets, but there's another link with the past hiding within its transport network: a converted steam train that takes visitors deep into the centre of Cuba's sugar-producing farmland.

The view over the city of Trinidad and its valley. Photo: Getty Images

Confession time – I love steam trains. So, when I heard there was at least still one running in Cuba I resolved it had to be on my itinerary. Three years ago, I was in Trinidad in central Cuba organising the pick-up time to get to the station, ready for my pre-paid and booked a train trip into the Valle de Los Ingenios (the Valley of the Sugar Mills).
“There’s something a bit strange about this,” said my Cuban friend. “I need to make some calls. I cannot find anyone who knows the departure time.”
He did so and returned looking rather bemused.
“The steam train hasn’t been running for about three years,” he said. “In fact, just at the moment there is no train at all.”

These things can happen from time to time in Cuba – most tourist operations are channelled through the government-controlled system with its labyrinthine bureaucracy. As visitor numbers increase, the system sometimes suffers from overloading. 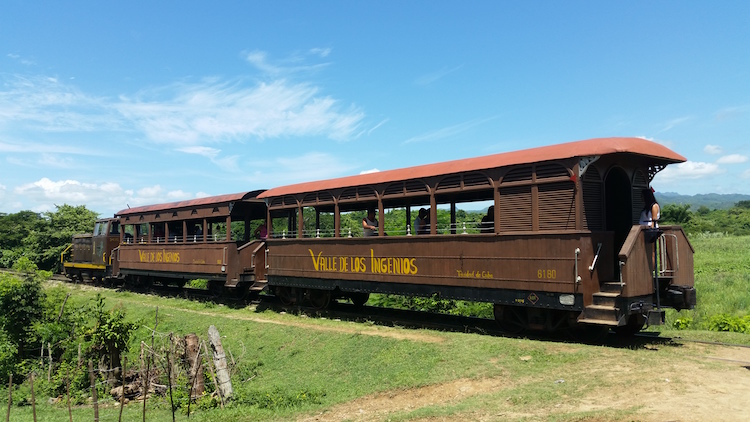 The train with its open-air carriages. Photo: Jillian Worrall

However, this year I finally achieved my train ride in Cuba, although the carriages were pulled by a Russian-made diesel rather than a steam engine! The engine had two open-air carriages attached and there were sufficient tourists in town to fill all the wooden seats.

We set off into the hills that separate the town of Trinidad from the valley, which together with the historic centre of Trinidad is a World Heritage-listed site. We chugged through secondary forest and then down into the valley, once one of the most important sugar producing areas in the world.

Sugar was introduced to Cuba by the Spanish in the 16th century; by the late 18th century and through until the end of the next, Cuba was the world’s leading producer of the sweet stuff. This made the nearby town of Trinidad very wealthy – along with the plantation owners, who made their fortunes on the backs of an estimated 30,000 African slaves. After the Cuban Wars of Independence, the sugar industry in the area went into a decline and plantations, the owners’ mansions, the mills and the land fell into ruin and disuse. 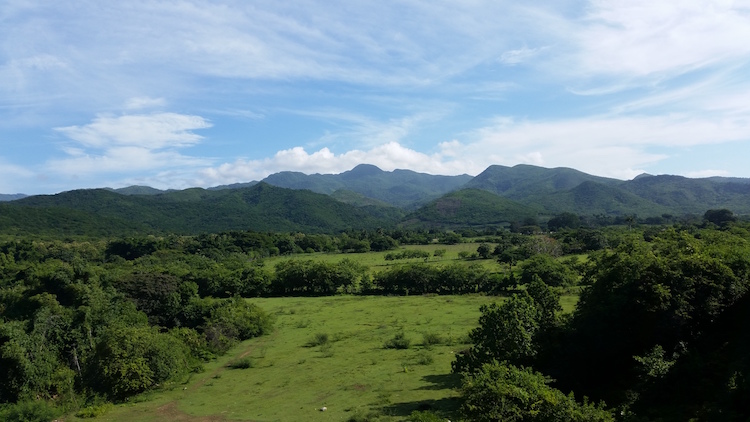 It’s near impossible to visit anywhere in Cuba without being serenaded by a band, duo or solo singer and almost always they are accomplished musicians. It’s one of the marvels of Cuba. However, on the train, I found the one exception that proves the rule. For some reason the train’s operators had managed to employ a singer of such awfulness that after his first bracket of songs many passengers, when approached for a tip, told him they would gladly do so if only he’d stop! But the train trip is a relatively short one and at times as the train clanked over iron bridges, his appalling singing and guitar playing were almost drowned out.

The train’s first stop is at Manaca Iznaga, a sugar plantation established in 1750 and then 45 years later purchased by Pedro Iznaga, infamous as one of the wealthiest men in Cuba with a fortune made from slave trafficking. The estate’s focal point is a 44-metre high watch tower which comes into view long before one catches sight of the restored plantation mansion itself. The tower was used to watch for fires and escaping slaves, and generally to supervise activity around the plantation.

The climb up is by means of slightly rickety staircase but if nothing else, it does grant a reprieve from the rather rapacious stallholders and wandering salesmen and women who are constantly trying to foist lace, embroidery and other handcrafts on visitors. It’s one of the only few places in Cuba where this happens en masse.

I escaped back to the train which then heads further along the valley, stopping right at the gate of Casa Buachinango, another plantation house dating back to the end of the 18th century which now operates as a rustic restaurant. 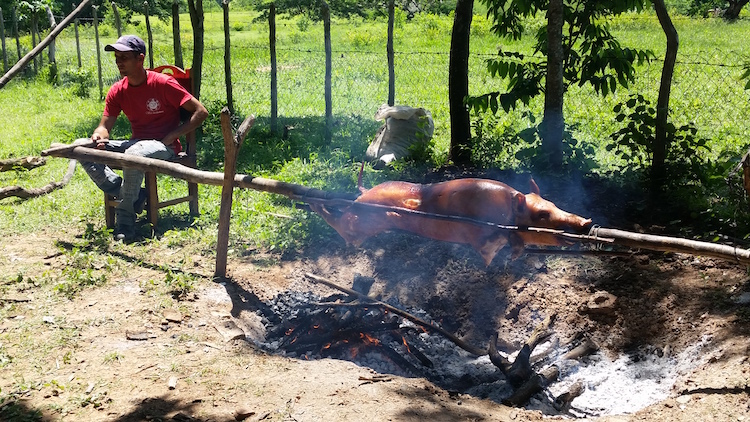 Here, we sat on the wide, shady veranda and watched our spit-roasted pig making a few last leisurely turns over an open fire before it was carved up under the trees. There was a mound of crackling to accompany some of the best pork I’ve ever eaten, which was served with the ubiquitous, but still delicious, Cuban combination of beans and rice.

As we prepared to leave the owners invited us to walk through the house with its terracotta-tiled floors and wide doors front and back that helped keep the central living area cool by channelling any breezes right through the house. We returned to town by road, passing once more the tower that, although now merely picturesque, is a reminder of a much darker era in Cuban history. The tablecloth and jeweller sellers were also heading home, leaving the plantation to its memories.