Ireland: the very best of the west

There’s no doubt about it, Ireland is a charmer. From the dramatic landscapes to the art of ‘having the craic’, the beauty of the nature and the Irish people will stay with you long after you’ve left. But forget about Dublin, the beating heart of Ireland is in the west - home of wild coastlines, raucous trad sessions and a stronghold for the native Irish language. Here are a few of the most unforgettable places to visit in the west of Ireland. 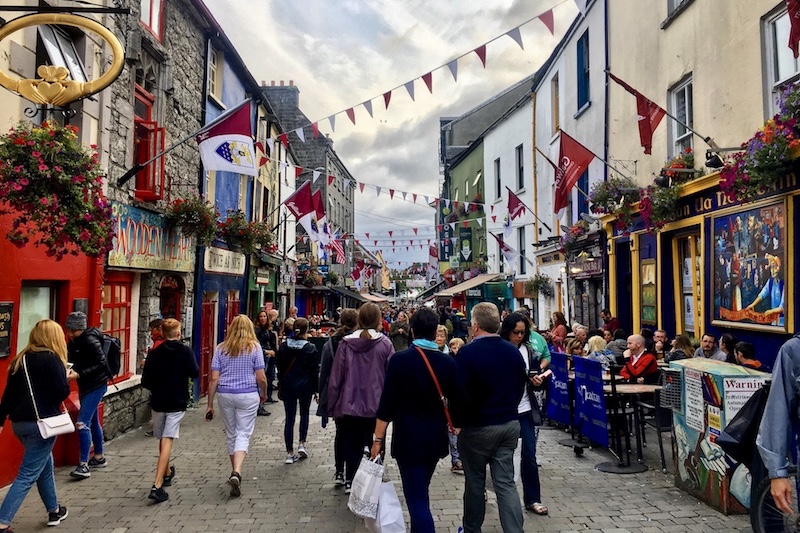 Beloved by the Irish, (no matter where they’re from) Galway is hard to beat. Whether it really counts as a city is debatable, as this colourful seaside hotspot boasts just 80,000 people. Lively all year round thanks to its large student population, Galway has restaurants, pubs and clubs to cater to all tastes and thirsts. It’s central streets (Shop Street and Quay Street are must-sees) attract buskers from all over, and any day of the week you can spot Irish dancers pounding away on the cobbles or enthusiastic popstar wannabes testing the limits of their karaoke machines.

The real attraction of Galway? The craic of course! Long-time big city dwellers may initially be shocked by chatty locals pulling up a barstool and asking for your life story, but really, it’s all part of the fun. For beach lovers, the seafront suburb of Salthill is only a 20 minute stroll from the city centre. Line up to fling yourself off the Blackrock diving board in summer or brave the winds along the Salthill promenade in the colder months. The months of June, July and August boast festivals galore – just don’t let the drizzle rain on your parade. 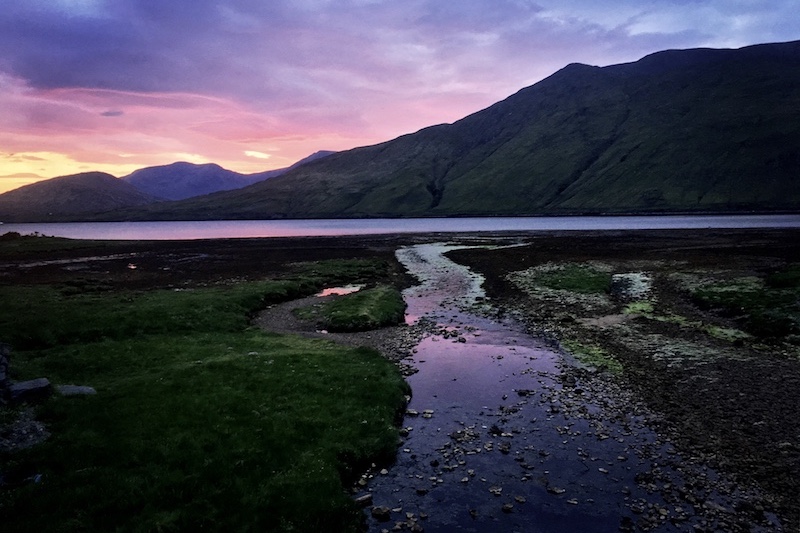 Less than 2 hours drive from Galway city lies the Killary, Ireland’s only fjord and a true gem of the Connemara region. Flanked by rugged farmland and the towering mountain of Mweelrea, the border between County Mayo and County Galway runs right through the centre. The fjord is home to thriving mussel and salmon farms, as well as a pod of bottlenose dolphins, but keep in mind that it’s also one of the wettest places in Ireland.

If you prefer to sightsee from the sheltered comfort of a dining room, take a cruise on the Connemara Lady, a 70ft catamaran which makes trips several times a day. The mussels served on board are as fresh as they get, and if the dolphins are out, you’ll be treated to dinner and a show. If you don’t mind getting a little (or a lot) wet, see the fjord up close while being flung off a biscuit at 50km/ph courtesy of the Killary Adventure Company. 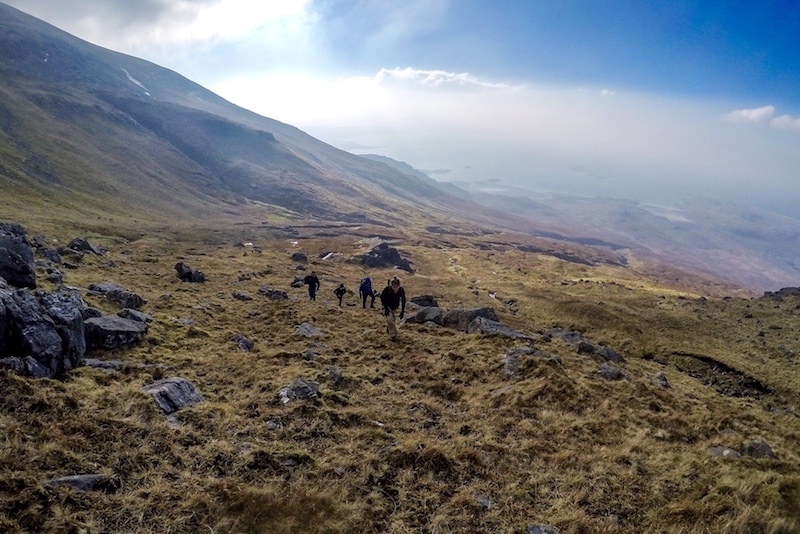 Not satisfied seeing Mweelrea from afar? Fair enough – after all, the highest mountain in Connacht offers stunning views over the Killary Fjord and Mayo’s Silverstrand Beach. The mountain is notoriously boggy, and has no real track to speak of, so you’ll really deserve that pint of Guinness after the three to four hours of sticky slog up and down.The upside? It’s unlikely you’ll be sharing the mountain with many others. The peak is dusted with snow and incredibly windy in the winter, so proceed with caution.

For a slightly less challenging, but vastly more popular climb, join the pilgrims and head to conical Croagh Patrick. In 441 AD it’s said that Saint Patrick - Ireland’s patron saint - fasted at the peak for 40 days. These days Croagh Patrick attracts around a million religious travellers a year who come to pray and confess at 2500ft. Gracing the front of just about every postcard in the region is the Connemara National Park. The park is free to visit year-round with a range of walks on offer, but the most rewarding by far is the trek to the top of Diamond Hill, with still lakes and golden tussock as far as the eye can see. Gawp at the towering peaks of the Twelve Bens, or see if you can spot the turrets of nearby Kylemore Abbey.

After the walk, treat yourself to a pint and some of the finest traditional Irish music you’ll ever hear in the town of Letterfrack. There are trad music events organised throughout the year, but if you’re lucky you’ll stumble across an impromptu session, complete with a bar full of locals enthusiastically singing along. 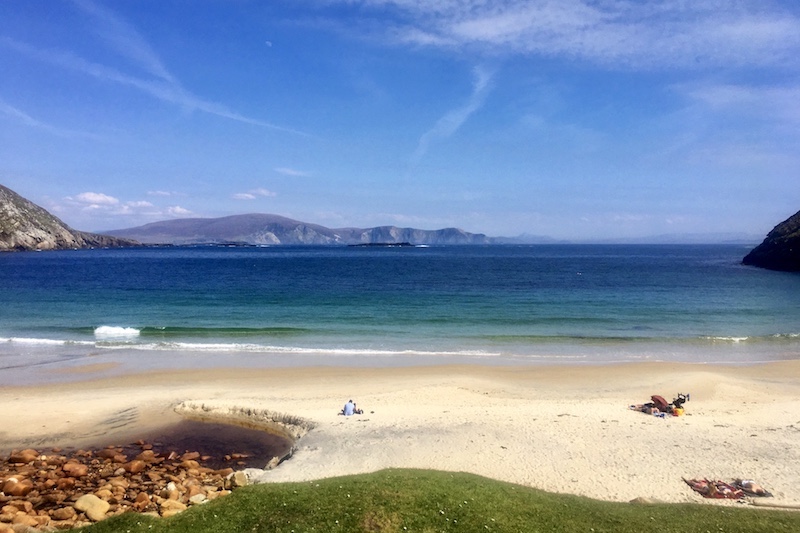 If you’ve never thought of Ireland as a beach destination, Achill Island might just change your mind. Bump along the cliffside roads while dodging gangs of wayward sheep before spiralling your way down to Keem Bay. You’ll be greeted with white sands, lush green grass and icy but gorgeous Atlantic waves. Like many parts of rural Ireland, the bay is gloriously free of development, save for an old coastguard station and the odd ice cream truck. Take a picnic or sample an Irish summer classic, a sickly sweet 99 soft serve cone.

Is is awe or is it vertigo? The heady combination of dizzying heights, vast stretches of limestone rock face and a stiff Atlantic breeze is enough to make one feel a little overwhelmed. Though they're crawling with tourists in the high season, the Cliffs of Moher are still well worth seeing. Put on some decent walking shoes (you might be surprised at the lack of barriers separating you and a 200 metre drop) and trek the 8 kilometres from Hag’s Head to O’Brien’s Tower. You’ll be able to take in the full scale of the winding crags, and find a rocky platform all for yourself.