On the road with the Kiwis

Just 20 hours after the All Blacks had broken their 24 year Rugby World Cup drought and given the country what they so dearly wanted, I was boarding a plane bound for the UK to cover one of my most favourite sports, Rugby League.

The flight was full of French supporters. (New Zealand beat France 8-7 in the RWC grand final), so it was an effort to hold my tongue from rubbing a little salt into their fresh wound. Lucky enough for me I fell asleep.

I arrived into Dubai at 5.30am local time feeling fresh and ready for my next leg to Manchester in two hours’ time. I used the time to plan out my days ahead, when and when the Kiwis were training and how to get to and from my hotel in Warrington.

Before I could get too deep into my organising I was headed down the gang way to board a brand new Emirates Airbus A380, I could hardly contain my excitement at getting to fly in a brand new plane fresh out of the box.

The flight arrived into Manchester around 11pm UK time, the perfect time for minimising jet lag, and very conducive to a much needed good nights’ sleep.

Since arriving I’ve been to Liverpool, where I took in the breath-taking sight of Anfield (Liverpool FC’s home ground), and a game between Everton and Chelsea.  Tonight I will witness the Four Nations opener between the Kiwis and the Kangaroos first hand. 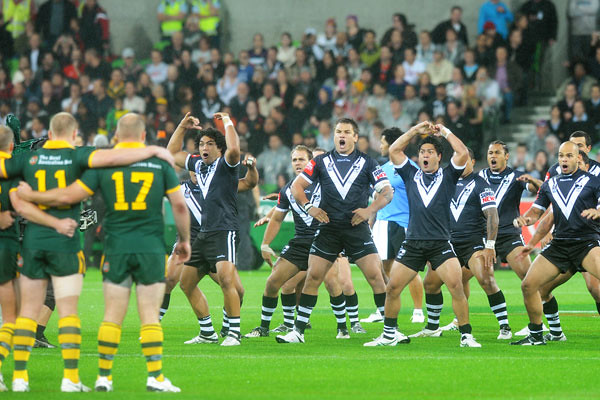 The ground, named Halliewell Jones Stadium (the home ground of the Warrington Wolves), is a far cry from the 80,000 that pack into the likes of the Sydney Football Stadium; it’s what you might call a little boutique ground bulging at the edges at a capacity of 13,000. But rest assured the atmosphere will be something else, for those in the front row will almost be able to touch the players. Tonight promises to be cold, meaning the crowd will easily see each breath the players will take.

Tomorrow I shift base from Warrington to London on the over ground train to prepare for next week double header at Wembley Stadium. I’m sure the train ride will be an experience in itself and look forward to telling you all about it.

For more information on sports travel and flights to London and Manchester, contact Flight Centre on 0800 24 35 44 .