Overview
Gallery
Things to do

Something you’ll notice as soon as you set foot in New Orleans is that it’s like no other place in the United States, or the world for that matter. This city’s colourful mix of cultures is intoxicating. When you’re not grooving to jazz on the streets or in the clubs, you’re feasting on delectable Creole cuisine. When you’re not losing yourself in the magic of the French Quarter, you’re joining in the fun and high spirits of one of New Orleans’ famous festivals or parades. Welcome to the Big Easy, where many who visit never, ever want to leave.

Read more in our article "Drop Me Off In New Orleans"

Get your camera ready and discover...

Strolling the picturesque streets of the French Quarter (the oldest neighbourhood in New Orleans) is the perfect way to get acquainted with this gorgeous city. Home to world-famous Bourbon Street, this is also the place to pop into museums including the fascinating Voodoo Museum, the historic 1850 House and the grand Cabildo Museum.

From Canal Street, hop onboard the St. Charles Streetcar. In operation since 1835, it’s a charming (and inexpensive) way to take in the city. Hop off at the Garden District to marvel at the impressive mansions and longstanding houses, some of which have appeared in Hollywood films including The Curious Case of Benjamin Button.

Then pay a visit to the Lafayette Cemetery and walk amongst the striking gothic tombstones and mausoleums. Finally, what visit to New Orleans would be complete without a boat ride on the Mississippi River? Take the ferry from Canal Street across the river, hopping off for a stroll around Algiers, the city’s second-oldest neighbourhood.

Leave your diet at the door when you visit New Orleans – this is a place where eating is well and truly celebrated. The local Creole cuisine is a mix of French, West African, Spanish, Caribbean and Southern influences. Don’t leave town without trying gumbo, jambalaya, muffuletta sandwiches, po-boys and, for dessert, mouth-watering sugar-dusted golden beignets. Wash it all down with a New Orleans signature cocktail, like the Creole Bloody Mary or Ramos Gin Fizz. Beer drinkers are looked after with 2 local brews: NOLA and Abita.

Dancing the night away won’t be a problem in this town. While Bourbon Street might be the most widely recognised entertainment strip, Frenchmen Street is where it’s really at for live music and an atmosphere that will dazzle – both in the clubs and out on the sidewalk.

Get a taste of New Orleans with...

The French Quarter is very popular for its gorgeous architecture, bustling streets, charming cafés, great shopping and excellent sightseeing. Visitors could happily spend several days in the Quarter without stepping a foot elsewhere. Look out for gorgeous 4- and 5-star hotels housed in grand old buildings.

Catch the best live music at…

Leave plenty of time for shopping in New Orleans – you’re going to need it. Magazine Street in the Garden District is a hotspot for art, antiques, fashion boutiques, cafés, restaurants and specialty shops. Royal Street in the French Quarter is also great for antique shopping and galleries.

The French Market District situated on the riverside of the Lower French Quarter hosts a bunch of cool shops along with weekly farmers’ markets and a flea market. Pick up your souvenirs in the shops along Bourbon Street and pop into one of the intriguing voodoo shops in the French Quarter for something a little different.

If you need to take a breather from the non-stop action of the city, do what the locals do and head to The Fly. Situated by the riverside behind Audubon Zoo, this peaceful spot in Audubon Park is where locals hang out, have barbecues and watch the sun set over the Mississippi River.

Join in the festivities of…

New Orleans: the road-tripping capital of the south »

An essential destination in its own right, the southern US city of New Orleans is also a brilliant gateway or conclusion to road trips taking in American history, popular music and cuisine. Explore the elegant colonial architecture of New Orleans' French Quarter, taking time for leisurely lunches of hearty Cajun dishes like gumbo or steamed crawfish, before appreciating 'The Big Easy' after dark in the city's jazz, blues and zydeco music clubs. For an insight into the legacy African Americans ha more >
USA nashville New Orleans memphis 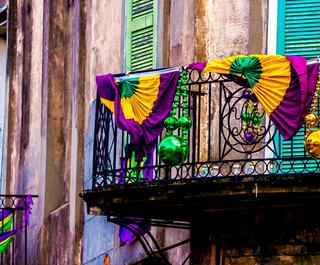 It’s the most famous parade in the world, so much so that it’s been replicated, copied and ripped off around the world. But if you want to experience the truest, most authentic, and frankly, the wildest Mardi Gras in the world, you have to get yourself to New Orleans. Convinced? Good, you’ll have an amazing time – but it’s best to know what to expect. Here’s a brief guide to making the most of your first Mardi Gras. Members of the Rex krewe parade down St. Charles Avenue, New Orleans. more >
mardi gras New Orleans carnival
Where to eat, drink and party in New Orleans »
See more travel experiences from our Blog »