Live la bella vita by sleeping off your pasta and gelato in a comfortable room in Rome, be it budget-friendly or all-out indulgence read more...

Find a room in the heart of Rome

The Modern Centre of Rome has an overwhelming assortment of hotels to choose from. While it's exciting to play it by ear, a little forward planning doesn't go astray. Home to the Termini train station, the centre of Rome boasts a huge range of hostels, bed and breakfasts, mid-range hotels and luxury villas.

You won't have any problems finding a room on Via Nazionale, Via delle Quattro Fontane, Via Palermo and the dozens of streets that surround. Outside the centre of town, more accommodation can be found in Old Rome, Colosseo, Nomentano and the North Centre.

Live like a Roman emperor in a lap of luxury by checking in to one of the 4 or 5-star Rome hotels on your holiday in Italy. Luxury abounds in Rome, from the Aldrovandi Villa Borghese to the Sofitel Rome Villa Borghese, both just moments away from the Spanish Steps and Trevi Fountain. There are lavish retreats for one and all in Italy's capital, nestled amongst the historic sights of the "eternal city".

Embrace the Italian love of decadence with a night or two at the palatial Grand Hotel de La Minerve, or blend history with modern flair at the Gran Melia Rome – a contemporary hotel in the Rome's cultural heartland.

Stay near Fiumicino or Ciampino airports

Whether you fly into the main Fiumicino (Leonardo da Vinci) International Airport or the low-cost base Ciampino just southeast of the city centre, there are plenty of Rome accommodation options to have you hitting the sack soon after you land.

Close to Fiumicino you will find the 4-star Sheraton Roma, stylishly facilitating both business and leisure travellers with a range of suites to suit, while the Best Western Hotel Riviera is only four kilometres from the airport, skirted by the sea. If it's the airport Ciampino you're arriving at, consider booking a bed and breakfast around the Via San Francesco D'Assisi. 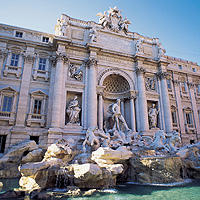