As Japan's third largest city, Osaka is commonly regarded as the best of both worlds; a happy medium between the hustle of Tokyo and the lax of Japan's province cities. 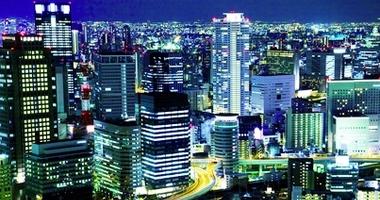 Osaka is situated next to the Yodo River in the Kansai region of Honshu, Japan's main island. Traditionally, Osaka's reputation is built around its importance as a business, economic and trade centre for Japan. While initially industrial, tourism is beginning to pick up on Osaka's merits as an international city with a laidback attitude. Much of the city was flattened during World War II but has since rebuilt itself back up to a skyscraper city. During the day, Osaka is relaxed but business as usual, while at night the city comes alive with a thrilling nightlife to rival that of Tokyo's.

In Osaka you can take your pick from a range of sites, from ancient temples to modern amusement parks, depending on your interests. Families and kids at heart will love visiting the city's Universal Studios and famous Osaka Kaiyukan Aquarium – one of the world largest public aquariums. Osaka's Sumiyoshi Shrine and Shitennōji Temple are amongst some of the city's oldest monuments, dating back 211AD and 593 AD respectively and are fascinating to walk through.

Osaka is famed for having the best food in Japan. Take advantage of the traditional cuisine on offer and order some fresh sashimi or okonomiyaki, a thick Japanese pancake, from a restaurant in Dotombori, Osaka's popular restaurant and dining precinct.

Osaka Castle, though a replica of the original 16th century structure, attracts a large crowd and is one of Japan's most famous sights.

Avoid a lost in translation moment by asking "Eigo o shaberimasu ka?", which means do you speak English?

Though it might not last for long, Osaka's sweet and unique candies are great for gifts and tasty souvenirs from your trip.