No other city in the world is as relaxed and as quirky as Amsterdam. Though it's mainly known for its clogs, red lights and reefer, Amsterdam's serene beauty, delightful people and lively laneways are the real heart and soul of the city. 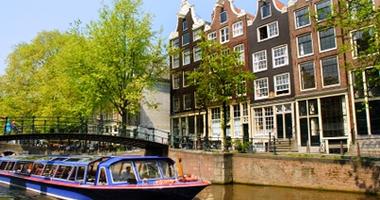 One of the many canals in Amsterdam
1

Day 1Welcome to the picture-perfect city of Amsterdam, buzzing with bicycles and boats. Every alley leads to another cosy bruin café and the...

Day 1What better place to start your jaunt through Holland than Amsterdam? Spend your day strolling through its pretty streets and tree-lined...

Day 1From tragic battles to tales of triumph, this special-interest exploration of two World Wars kicks off in the vibrant British capital of...

Day 1Airport transfers depart Brussels airport for your centrally-located hotel at 09:00, 11:00 and 14:30. After checking in, the afternoon is...

Originally established as a fishing village, Amsterdam is the capital city of the Netherlands, located in the north province of Holland. The city's numerous canals are connected to the river Amstel and are the result of town planning. Amsterdam is also incredibly flat and as a result bicycles are a popular mode of transport. Like most European cities, Amsterdam's architecture is rich in history and spans a range of periods.

Amsterdam cruises disembark at the Passenger Terminal Amsterdam, located less than 2km from the city centre.

Amsterdam's unique history can be discovered at the city's numerous museums. Here you can gain insight into one of the world's greatest artists at the Van Gogh museum or learn about Amsterdam's dark history at Anne Frank Huis, the house turned museum where famed author Anne Frank went into hiding. Out in the sun, walk along the scenic canals and through Westerpark, a trendy park enjoyed by local creatives. Want to see it all? Take a tour of Amsterdam…

Make sure you visit Amsterdam's upscale area Jordaan. This picturesque city neighbourhood is home to edgy galleries, buzzing cafes and is the ideal place to wander through and experience what Amsterdam is all about.

When getting directions, ask if you can walk there in Dutch by saying Kan ik daar naar toe lopen?

If a pair of clogs is a little clichéd for you, pick up a unique Dutch birthday calendar instead.