Rich with romance and culture, Budapest is often praised as one of the most beautiful cities in Europe. Found along the pretty Danube River, the sprawling city enjoys natural beauty, world heritage sites and a buzzing night life. 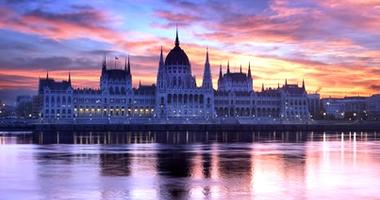 Budapest is the capital of Hungary, a European country that shares borders with several countries including Romania, Croatia and Austria. Budapest is split into two different cities by the Danube River. On the hilly West Bank lies Buda, while on the flat East Bank you'll find Pest. Much of Budapest has been assigned UNESCO World Heritage status including the Buda Castle quarter and even the Danube River banks themselves. Budapest also has the biggest Jewish community in the Europe.

Budapest cruises disembark at Budapest Port on the Danube River, within the centre of town.

Once you reach Budapest, walk along the banks of the Danube and marvel at Hungary's diverse architecture. From there, head over to Buda to see the neo-Gothic Matthias Church and other historic landmarks. Cross the bridge to Pest and wander through the old Jewish district and visit the stunning Budapest Central Synagogue. Once you've had enough of sightseeing, enjoy a unique Hungarian experience with a soak at one of Budapest's thermal baths. Want to see it all? Take a tour of Budapest…

Locals come alive over coffee and cake in the cafes of Budapest. Head to one of the age old cafes in Buda and enjoy an intense meal, sweet strudel and creamy coffee – all made from scratch.

Budapest's most famous landmark and a 'must see' for all travellers is the heritage listed Buda Castle. See this grand landmark and its serene view by taking the Funicular Railway up the hill.

Ask a local the time in Hungarian by saying Hány óra van?

Bring home a piece of Hungarian folk art or a boutique bottle of wine from one of the street markets in Budapest.