Welcome to the land of pizza, Italian passion and a million photo opportunities. Here on the Amalfi Coast including Naples and the neighbouring island Capri, you'll fall in love with the food, culture and that amazing ocean view. 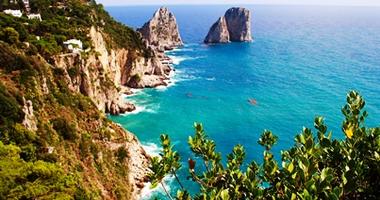 Naples is a coastal city located in the south west of Italy, near the Gulf of Naples. Just off the coast around 5km from the Bay of Naples is the small Italian island of Capri. These two areas enjoy a rich history, bustling promenades and panoramic views of the deep blue Mediterranean ocean. Italian culture here is alive and well as both areas are populated with historic churches and traditional restaurants filled with energy and warmth.

Naples cruises dock at the terminal Stazione Marittima found within walking distance of the city centre. Capri cruises disembark at the Marina Grande which is close to the Funicular station where you can catch a train to the town centre of Capri.

As a neighbour to the partially buried town of Pompeii, the museums in Naples are widely renowned and popular with tourists. The most visited museum in Naples is the Museo Archeologico Nazionale which displays a range of artefacts from Pompeii. Elsewhere in Naples you can wander the historic centre and view the magnificent Veiled Christ sculpture located in the Sansevero Chapel. When you reach Capri, catch the scenic Funicular (cable-car train) to the main square of Capri town. Here you can view the large clock tower, wander around the markets and watch the world go by.

For an unforgettable Italian meal, order a traditional Italian pizza from one of the local pizzerias. Whether you're in Naples or Capri, a pizza here is sure to be one of the best you'll ever eat.

While in Capri, absorb all the sights of Piazzetta – the churches, the architecture and the bustling cafes.

Lost in a winding street and need directions? Dov'e (doh-vay) is the term for 'where is'.

The Christmas nativity scene is said to have originated in Naples during the 18th century. Capitalising on its heritage, the city now produces a range of nativity figurines, from the traditional to the novelty, all of which make great souvenirs.