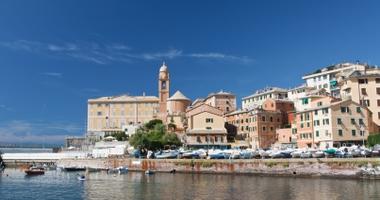 The historical port city of Genoa is found in northern Italy's Liguria region. Genoa is one of Italy's major trade and economic centres and has a number of leading companies based in the city. Away from the seaside, Genoa's cobblestone streets, old terracotta houses and seaside villas are piled high along the coastline and surrounded by hills. Though commonly written off as a mere port city, Genoa is one of Italy's hidden gems, with all the charm of Rome and Venice, minus the large crowds.

Once you disembark, head to the city's old port, Porto Antico, a popular hub for locals and tourists. Take in the sights of Genoa's picturesque streets and admire the city's ocean views from a vantage point such as Castelletto or La Lanterna, the city's famous lighthouse landmark. Another of the city's famous attractions is the former house of explorer Christopher Columbus, located in the medieval quarter of Porta Soprana. From Genoa it is also possible to take a day trip to Milan or along the Ligurian coast to Cinque Terre.

Genoa is home to Europe's second largest aquarium which houses over 500 ocean species and 71 tanks.

Looking for the city centre? Ask a local for directions by saying 'Dov'è il centro?'

Like most Italian cities, wine, clothes and leather goods are ideal purchases.