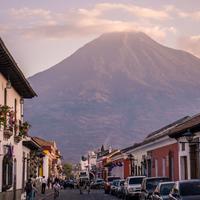 1 AntiguaWelcome to Antigua, Guatemala. With crumbling churches, vibrant markets and bohemian cafes set against the backdrop of monumental...

Sprinkled with dense jungles, bohemian towns, impressive crater lakes and incredible surf breaks, Central America’s ‘secret garden’ is one of absolute beauty and serenity. El Salvador’s burgeoning eco and adventure tourism scene is authentic and one that gives back to the communities, so you can rest assured tours here are invaluable for the local economy and environment. While the country suffered during a long period of political unrest, a new era has dawned on El Salvador and its treasures are just waiting to be uncovered.

Take to the streets on a walking tour of cosmopolitan San Salvador where you can get lost among the antiquities of the Museo Nacional de Antropologia David J Guzman. You can also pass through quaint artisan villages on the Flower Route, one of the country’s most popular attractions.

History enthusiasts can get a sense of the tragic Civil War with a journey through battle territory on horseback up to Guazapa Volcano. The town of Suchitoto is another gem worth exploring for its galleries and nature hikes, plus it was one of the power bases of left-wing insurgents.

Surf’s up in El Salvador

El Salvador is fast gaining a reputation as one of the world’s surf meccas, with popular point breaks like La Libertad and popular Punta Roca. There are also plenty of other water activities to try your hand at including Stand Up Paddleboaring at Intipuca and water skiing and para-sailing at Playa El Esteron.