Bunnies for miles! A trip to Japan's 'Rabbit Island'

A short ferry ride from the Japanese mainland is a very unusual island. Okunoshima is only a kilometre or two wide, but it's home to close to a thousand tame rabbits, all roaming free. Joseph Harper took a daytrip to feed the bunnies.

A tiny tropical island overrun by hundreds of beautiful little tame rabbits sounds like something from a children's movie. I assure you though, Japan’s “Rabbit Island”, Okunoshima, is very real, and somehow even more adorable than it sounds. The island is a short trip by train and ferry from nearby Hiroshima, and makes for a delightful day trip. Just remember to bring a snack for the usagi (rabbits). 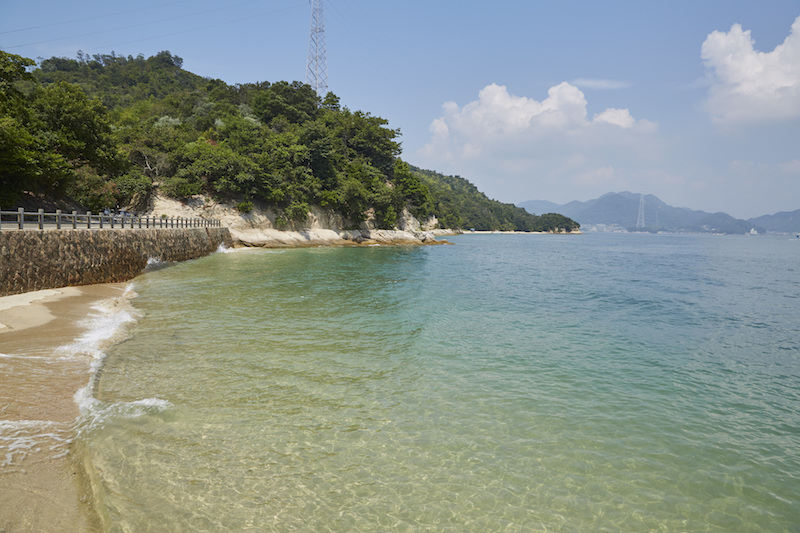 There are various urban legends as to how the island’s rabbit population came to be. Some believe the origins of the rabbits can be traced back to bunnies that were used for testing at a chemical factory on the island, who, after the closure of the factory, escaped and transformed the island into the leporine paradise it currently resembles. Others believe a small herd of rabbits was released on the island by a group of school children on a field trip in the early 1970s. Whatever their true origin story, the rabbits of Okunoshima have truly made the island their own and can be found everywhere, gently loping out in hope of a snack. 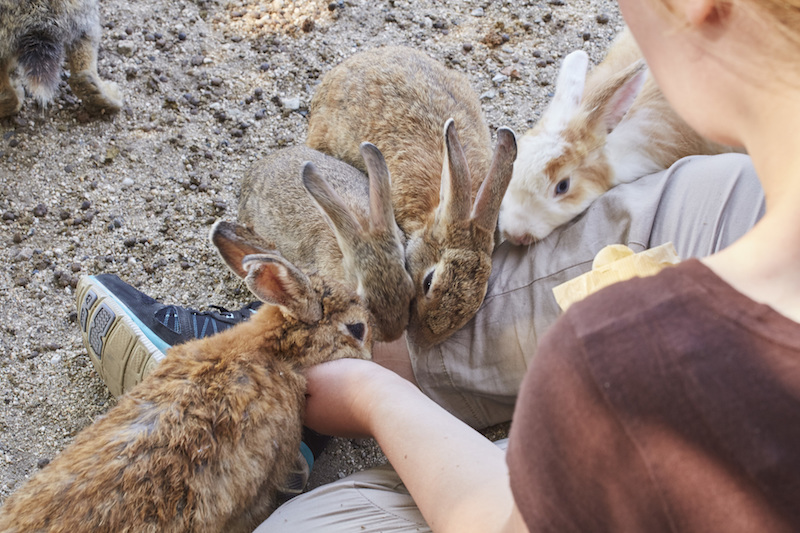 I visited the island on a beautiful autumn day. My partner and I took the shinkansen (high speed railway) from Hiroshima Station to Mihara Station, which took just under two hours. From there we took a local train to Tandanoumi Station. This leg took just over twenty minutes and was a very pleasant, coastal route. At Tandanoumi, you can purchase a ferry ticket which will get you to Okunoshima in around fifteen minutes. All train travel can be covered by the indispensable JR Pass, and the ferry tickets were a measly 320 Yen (approximately $4) return. The ferries don’t run late in the day so make sure you start your trip early, and don’t forget to snap a picture of the timetable at one of the stations. 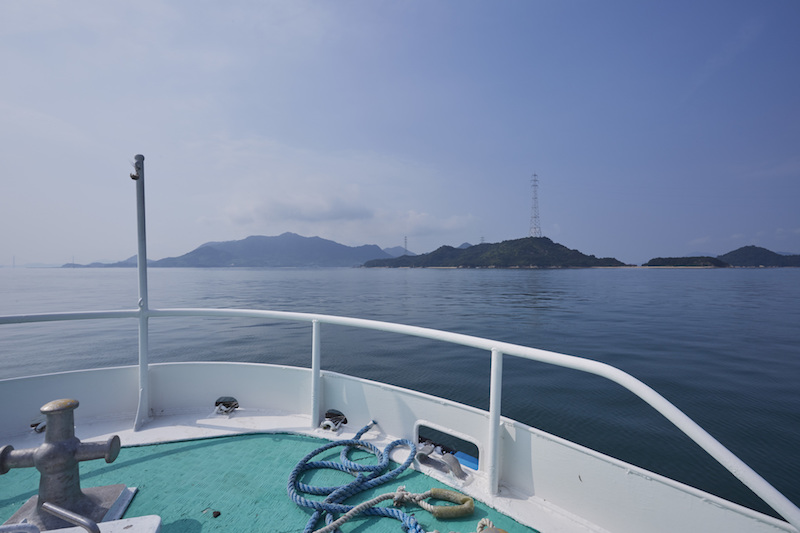 Tandanoumi is a very small town, but the port features a tiny convenience store where you can purchase a variety of rabbit themed souvenirs, some basic snacks, and of course cold beer. You can also get pellets to feed to the rabbits. We waited for 15 minutes for our ferry to arrive, and after two weeks embedded in the bustle of urban Japan, it was a lovely calming experience to spend a quiet moment at the glistening water’s edge, sipping on a commemorative Hiroshima Carp branded Asahi, contemplating the local birds gliding overhead, and watching a drone operated by two American teens.

The island itself is light on amenities, so you’d be wise to travel with a backpack and stock it up before you arrive. We purchased two small bags of pellets, and brought with us two bags of shredded romaine lettuce which we bought from a convenience store in Hiroshima. 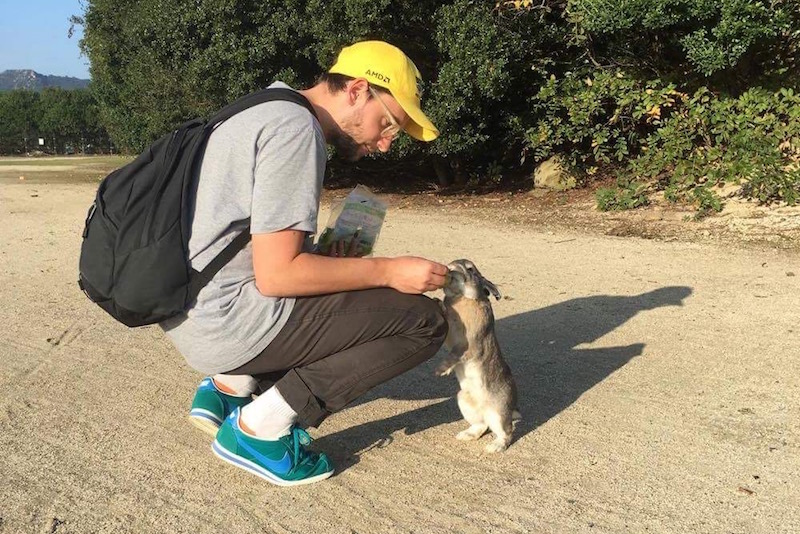 Once we arrived on Okunoshima, we were immediately inundated with bunnies. The port is a fairly miserable, barren patch, but things were cheered up greatly by the critters who hopped up to us with every tiny rustle of our pallet bag. We fed the rabbits there for a short while then began our trek around the island, hoping to circumnavigate it. After the port, we walked along the coast to a visitor centre where we gathered some literature for scrapbooking.

After the short walk, the path opened up to a gorgeous beachfront vista. This was the site of the island’s only hotel, from which you can get a meal, hire a bike, and where you can (of course) spend the night. The beach was dotted with palm trees and the front of the hotel featured a well-manicured putting green, which numerous rabbits hopped over. We found a grassy spot and spent a good while eliciting the company of the locals with our leafy greens and delicious pellets. We carried on around the island. There is a clearly marked route that takes you around the island, eventually winding back to the port. Everywhere we went, there were bunnies burrowing under fences and popping out from under bushes to greet us and sample our wares. The rabbits were incredibly friendly and seemed accustomed to interactions with humans, though petting them isn’t encouraged.

Aside from the rabbits, a walk around the island only takes an hour or so and there is a number of lovely distractions. Quite scary looking spiders spin webs among the lush bush, plenty of local birds will dart across your path, and the views back to Honshu and out over the dozens of islands scattering the coast are top notch. 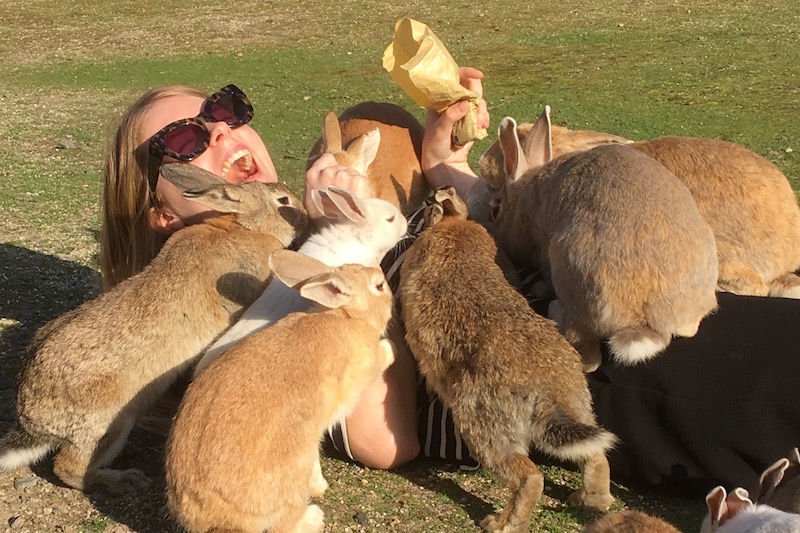 Near the end of the trip, my partner decided to lie down and cover herself in pellets and within seconds she was covered in adorable, hungry little creatures. Dozens of them swarmed on top of her and vigorously pecked away at the treats she’d laid out for them. It was amazing. A trip to Okunoshima is a lot of fun and a truly unique experience. A definitive highlight of our trip to Japan.