Seafood Fever: A Guided Tour of the Seoul Fish Market

For nearly 90 years, Seoul's seafood obsession has been stoked by the traders at Noryangjin Fish Market. Sharon Stephenson takes an early-morning tour.

Slapped around by jet lag? Sleep nowhere to be found? If you’re in Seoul, there’s a way to fill in those wide-awake pre-dawn hours: a visit to the fascinating Noryangjin Fish Market.

A half hour ride on Seoul's clean and extremely efficient subway delivers you to the capital’s largest wholesale fish market, where hundreds of locals gather to prod, haggle, buy and sell fish that only hours ago was searching for its dinner in the chilly waters of the Yellow Sea. 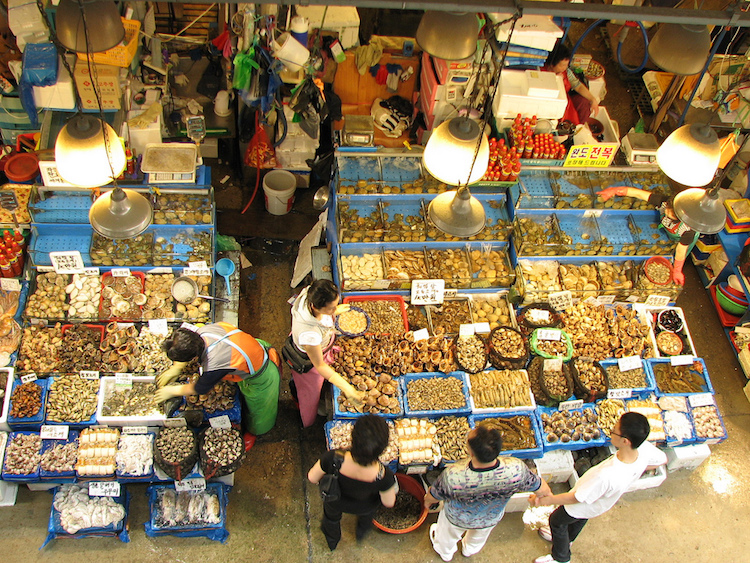 But you'll need to keep your wits about you at Noryangjin, because sullen men in motorised carts zip in and out of the narrow aisles, ignoring feet that get in the way. Others in aprons and boots brush past with giant knives, sharpened tips pointing outwards.

Established in 1927, Noryangjin is plonked amongst a sea of high rise apartments south of the Han River. At 9,000sqm, it's an impressively messy jumble of around 700 stalls, many of which don't have names or numbers. I can't quite figure out the system but my guide tells me they're divided into sections selling live, frozen, dried and pickled fish.

We wander around the piscatorial wonderland, gazing at buckets of sleek black eels, fat pink prawns falling out of tubs and endless polystyrene boxes of octopus. One elderly stall-holder, cigarette hanging from his mouth, arranges mounds of prized sea snail (abalone), as tenderly as if they were his first born. 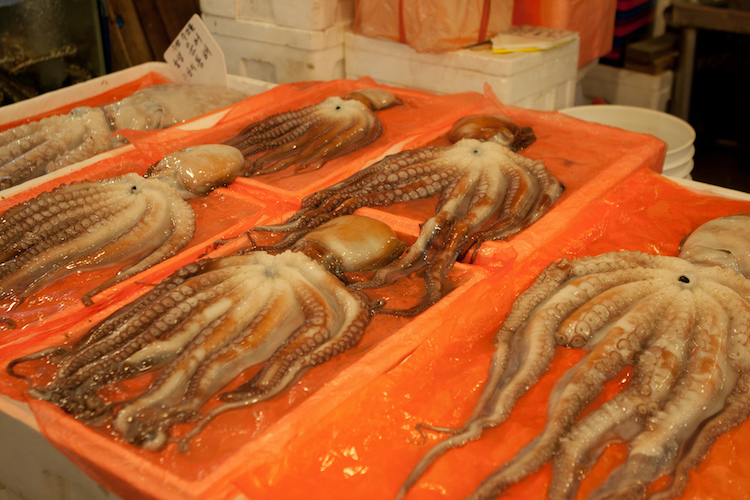 In my jet-lagged state, it's hard to put a name to the rainbow of odd-looking molluscs and hairy shellfish that are about to become someone's breakfast. There’s also much that falls into the 'what the #$% is that?' category, such as the puffy orange balls with barnacle-like growths that my guide tells me are sea squirts, or the pinkish slugs that look remarkably like a part of the male anatomy. We never find out what they are but, as is the case with so much of Korean cuisine, taste trumps presentation.

Noryangjin is open 24 hours a day so should you get the hankering for a piece of tuna at midnight, you know where to come.

Early morning is, however, when the market goes into overdrive. Every day, around 440 tonnes of seafood is hauled in from ports all around the country, enough to service the 30,000 restaurateurs and locals who shop here. Handling that incoming tide of seafood is around 4,000 staff, many of whom have inherited their stalls from parents or grandparents.

We watch men move along the rows, feeling, smelling and touching the bounty, before scribbling furiously in notebooks. There's lots of shouting and gesticulating but as the language barrier is too high to jump over, I'm not quite sure if they’re pleased or displeased with the product. 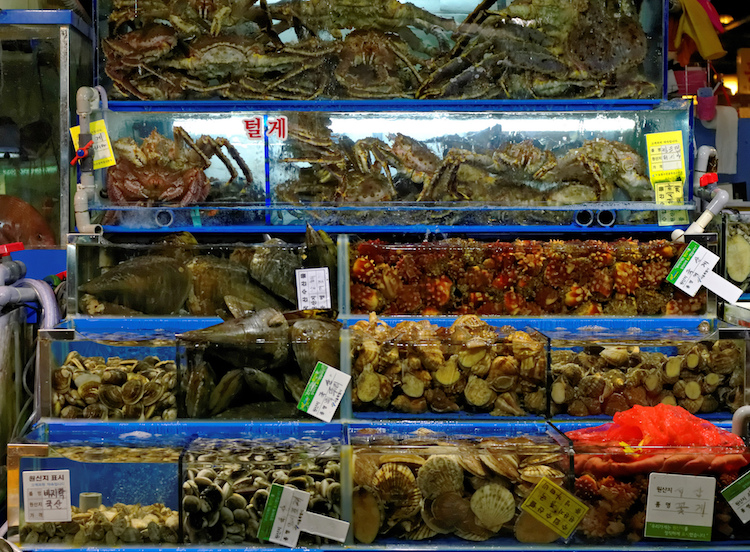 At 5.00am, a bell rings and the last auction of the morning starts. The auctioneer, a slight chap with the fastest larynx in Seoul, burns through pallets of seafood. I don't understand a word he says but the energy and speed with which deals are done is breath taking.

By now, fingers of sunlight are pushing their way into the concrete canyon and the market is settling into its day. A key part of the Noryangjin experience is selecting fish to take upstairs to the dozen or so restaurants who will cook it for you. Our guide picks a large halibut which the seller sends to the hereafter with one quick swipe of a menacing looking blade. He cleans it and bags it for us take upstairs.

We agree to try it 'hoe' (pronounced 'hwe') style, which turns out to be raw, a Korean riff on sashimi. Yet unlike their neighbours and one time invaders the Japanese, who take their raw fish with soy sauce and wasabi, Koreans prefer the lacerating properties of hot chilli paste and sesame oil.

A few days ago I tried the local speciality of jjukkumi, still-alive and wriggling bits of baby octopus that can block your airway and kill you. Unsurprisingly, I'm not keen on a rematch. Instead, I opt for maeuntang, a spicy soup made from the bits of halibut that didn't find their way into our hoe.

Like so much in Seoul, where skyscrapers butt up against Buddhist shrines and the same energy that went into rebuilding the city after the devastating Korean war is channelled into top-of-the-line TVs and mobile phones, Noryangjin is an unexpected delight. And a great antidote for jet-lag.