The Songkran festival in Bangkok is just a street party – it's the biggest waterfight on the planet. And everyone's invited, writes Brett Atkinson.

It's only my first morning in Bangkok, but I've already been "shot" in the back by a rampaging teen, and narrowly avoided running water battles between backpackers and locals in the travellers' neighbourhood of Khao San Road. When water snipers take over key buildings in the city's CBD, it's definitely time to start fighting back! 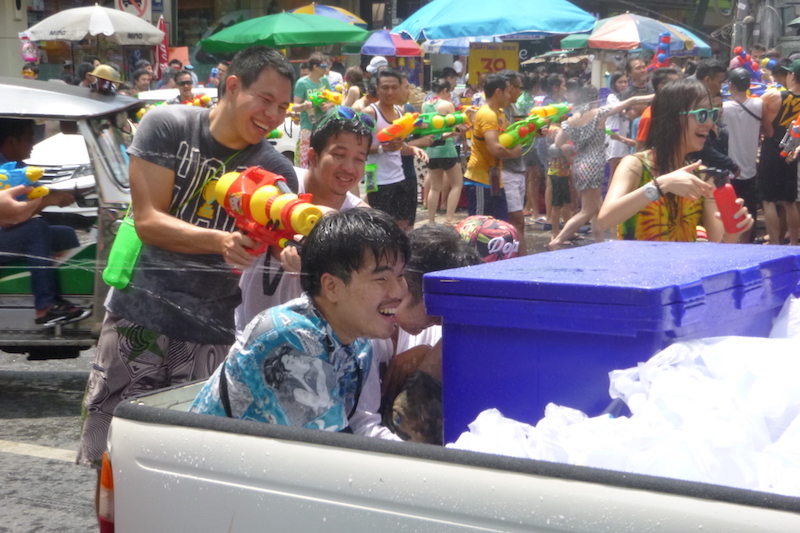 In the ice-cold combat zone of Thailand's Songkran water festival, it seems like everyone is packing liquid heat, and entire families armed with water-powered weaponry are roaming key intersections in the city. The weight of Minions-branded backpack reservoirs almost overwhelms the littlest kids, but they still get regular salvos away from behind sodden ornamental elephants. The beatific smile of Elsa from Frozen is plastered on compact but effective handguns, and there's enough ordnance in circulation to fuel a hundred roadside skirmishes. The puny water pistol I'd considered buying would have been no match for the heavy duty firepower on offer!

Held at the beginning of the hot season in April, subtle variations on Songkran are held across southeast Asia in Laos, Myanmar and Cambodia, but only in Thailand has it morphed energetically into the biggest waterfight on the planet. The festival's traditional roots include gently sprinkling water onto a good friend for New Year's luck, but now Songkran is three days packed with buckets of water being thrown through the open windows of buses, and the bizarre spectacle of local traffic cops being soaked while marooned in Bangkok's customary gridlock. Factor in quieter side alleys packed with great street food and an incessant soundtrack of doof-doof Thai music, and it's one of the world's craziest festivals!! 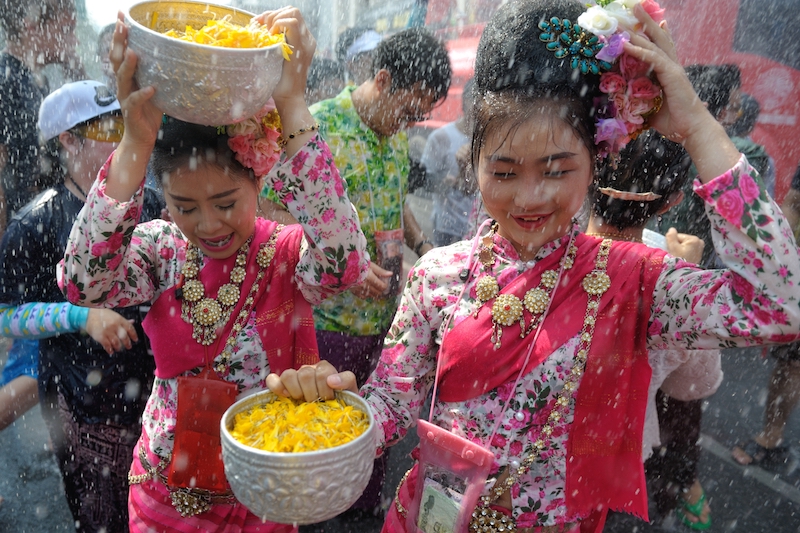 By around noon, Bangkok's heat and humidity begin to peak, and the rest of the afternoon descends into sheer, unadulterated fun. Watery blasts hit me from nowhere and everywhere, and the concrete and steel urban landscape of the nearby Sala Daeng Skytrain station provides minimal cover. Sharpshooters crouch under escalators leading to train platforms and a tropical mist rises languidly from the tarmac battlefield. When a six year-old boy equipped with a Hello Kitty AK-47 tags me in the head, it's finally time to retaliate.

After a restorative lunch of grilled squid-on-a-stick and a heaving plate of pad Thai noodles, I re-enter the battle empowered with my own Angry Birds gun. I'm soon thoroughly outgunned again though, and forced to retreat and reload at a savvy streetside entrepreneur offering on-the-go refills for 10 baht (around 40 cents). Other vendors are hawking colourful paraphernalia including waterproof sleeves for smartphones, and safety glasses offering essential eye protection are also for sale. I continue through a dayglo tropical maze where everyone is irredeemably soaked to the skin, and receiving ongoing volleys to my drenched torso I soon notice that irrespective of age, gender or culture, everyone is wearing the same silly grin.

They're also sharing the same thought of knowing there's nowhere else they'd rather be than immersed in the battle of Songkran on the mean streets of the Thai capital.

Kite Flying Season – During the windy season from late February into March, kite-flying events are held in the city. Check out all the colourful aerial action at Sanam Luang in front of the Grand Palace, or above the lake in Lumphini Park.

Vegetarian Festival – This ten-day Buddhist festival in October fills the busy lanes of Bangkok's Chinatown with scores of special meat-free menus from local street vendors. Arrive around 5pm for the best of selection of dishes.

Loy Krathong – Bangkok's most beautiful festival occurs in November when flotillas of tiny lotus-shaped boats crafted from banana leaves are topped with flickering candles, and then set adrift under a full moon on the Chao Phraya river.