With a balmy climate all year round, Cairns is a city where summer holidays never end. Naturally, the stream of tourists are equally endless, with travellers flying in from all around the world to experience the Sunshine State in all its sunburnt glory. Cairns is the idyllic international hub for tourists wishing to see two World Heritage sites side-by-side: the Great Barrier Reef and the Daintree Rainforest.

On any given day, you'll find a flock of cruise ships setting sail from Cairns' harbour, bound for the largest coral reef system in the world or secluded outlying islands. Those who stay back on land, however, can be equally inspired and entertained. Jump in the car and explore Cape Tribulation or the rolling hills of the Atherton Tablelands, or stay in the CBD and take a dip at the Esplanade lagoon. Whatever you do just make sure, in true Cairns' style, that you do it at a laidback pace.

When it comes to things to do in Cairns, the city's natural assets are where you'll find most of the action. At the top of your to–do list should be the Great Barrier Reef, found just a cruise ride away. The Daintree Rainforest is another of Cairns' tourist attractions beloved for its abundant fauna and ancient flora, with parts of the forest dating back to over 135 million years ago.

South of the Daintree and only a short drive from Cairns, the Atherton Tablelands is another region worth exploring for its expansive country and farming scenery. See the area from above with a hot air balloon ride or scale even greater heights with a sky diving adventure.

Much like it's population, dining in Cairns is a multicultural affair. From Asian to Australian, Greek, Indian, Thai and Mexican, you can practically taste you're way around the world in Cairns. For a true taste of quintessential Cairns cuisine though, don't miss the fresh–out–of–the–ocean seafood, best enjoyed overlooking the water along the Esplanade.

At sunset, sit down to the catch of the day at Barnacle Bills or enjoy family–friendly dining at Charlie's, both on the Esplanade. For alfresco dining Cairns–style, order fish and chips wrapped in newspaper and enjoy a casual meal at one of the Esplanade's picnic tables.

As a travel hub for one of Australia's major tourist attractions, Cairns accommodation is diverse and abundant, with 5 star resorts standing alongside budget friendly apartments. While accommodation prices and amenities range greatly, much of the city's accommodation is designed to soak up the very best of the Cairn's weather.

This means a focus on pools and ocean views, with some of the city's best resorts, like the Shangri–la, congregating near the Esplanade and overlooking the ocean. Other hotels in Cairns can be found a few streets back from the Esplanade in the city centre as well as near the airport.

When the sun has gotten the better of you and you can't bear to eat any more prawns, take a break with some retail therapy. Like most tourist cities, Cairns has an ample amount of shopping experiences on offer, from designer boutiques at The Pier near the Marina to bargain outlets at DFO. For a uniquely Cairns shopping experience however, don't miss the popular night markets.

Taking place nightly from 5pm along the Esplanade, the Cairns Night Markets are a great place to mingle with locals and pick up a souvenir or two, like local pearl jewellery, indigenous crafts and clothing. For more market shopping, head over to Rusty's Markets on Grafton Street where you'll find 180 stallholders touting fresh produce as well as clothing, leatherwear, second hand goods and more.

Though much focus is placed on the Esplanade and the Great Barrier Reef, the locals of Cairns have a few favourite spots of their own that they like to keep a little secret. One popular spot for tourists and locals alike is Crystal Cascades, a secluded freshwater swimming hole found in a rainforest 20 minutes from Cairns.

Local favourites also include Mission Beach, Palm Cove, Trinity Beach and Yorkeys Knob; and the lush Atherton Tablelands, home to tiny country towns, coffee farms and boutique wineries. Make the most of your Cairns holiday by hiring a car and see the hinterland like a local on a self-drive tour through North Queensland.

What to do around Cairns »

Top Tips for a Family Holiday in Tropical North Queensland » 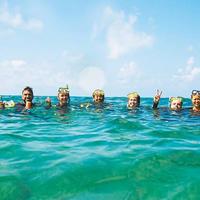 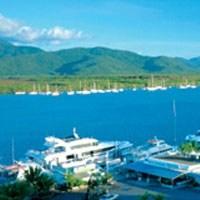 Other Destinations in QLD