Overview
Gallery
Districts
Where to stay
Getting there

A small oasis in the Mediterranean Sea, Malta is an island nation with a breathtaking landscape and a rich history. Inhabited since the Neolithic era, its ancient temples are some of the oldest in the world and its entire capital is a UNESCO World Heritage site.

Historically cosmopolitan, in the past Malta has been ruled by the Ottomans, the French and the British, before raising its own flag in 1964. In 2004 the country become even more inviting for tourists when it was admitted to the European Union and switched over to the Euro currency.

Still considered a stepping stone between Europe and North Africa, Malta offers visitors an exotic blend of cultures to enjoy on their holidays with both English and Maltese the country's official languages.

Come for sun and stay for the culture

Home to Malta's only airport, Valletta is the ideal starting point for a Malta holiday. A beautiful Baroque city, Valetta was officially declared a UNESCO World Heritage site in 1980 and recently named the 2018 European Capital of Culture.

Tourists flock to Malta for many reasons, one of which is its warm and sunny Mediterranean climate. During the peak season, between June and August, Malta is so popular that visitors can outnumber locals three to one!

A summer visit is well worth the buzz with Malta offering plenty of stunning beaches, fantastic dive spots and the incredible Blue Grotto, located on the south coast of Malta.

Also considered mandatory is a visit to the ancient capital of Mdina, known as the 'Silent City'. Perched atop a plateau, Mdina is one of Europe's best examples of an old walled city.

Choose from both day and night adventures

In addition to Malta's main island, many also choose to discover the other inhabited islands, Gozo and Comino. Both are much smaller and calmer than the mainland, offering historic sites, natural beauty and an escape from the hustle and bustle of city life.

To really get away from it all, pack a few bottles of water, don your hiking shoes and go exploring ancient ruins, abandoned temples and small beaches at your own pace. Popular day hikes include Dingli, Fawwara and Wardija.

If nightlife is more your vice, there are plenty of options to let loose with Malta offering world class DJs and music festivals, especially during the summer months. One calendar highlight is the annual Isle of MTV Malta Special. Europe's largest open-air free concert, the event offers international artists a place to take the stage year after year.

A diverse and exciting destination, flights to Malta are frequent from centres throughout Europe, North Africa and the Middle East. All land at the Malta International Airport, located just eight kilometres from Valletta meaning you can start unpacking your suitcase almost upon arrival.

The combined surface area of Malta and Gozo is only 316 sq km, less than 20% the size of Stewart Island, but the compact Mediterranean country easily reached by direct flights from London and Dubai is packed with travellers' highlights. It's also possible to catch a fast ferry taking less than two hours south to Malta from the Italian island of Sicily. A vegetable stall, Valetta. more >
Europe Malta
See more travel experiences from our Blog » 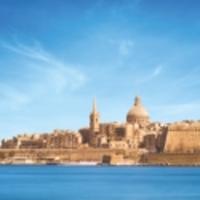