From the bright neon lights of Times Square to the jaw-dropping skyscrapers of Wall Street, New York is one of the most exciting cities in the world! Boasting world-class museums and art galleries, incredible icons that you will recognise from Hollywood movies, and an array of award-winning restaurants and bars, New York bursts with energy, people and culture.

In the city that never sleeps, everything seems bigger, bolder, faster and noisier – because it is! Attracting more than 50 million visitors a year, the Big Apple is a vibrant and fast-paced metropolis with so much to see and do.

Carrie Bradshaw made it sexy, Gatsby made it glamorous and Frank Sinatra spread the news about it – it’s New York, New York. You’re probably well aware of New York’s paramount attractions – namely the Empire State Building, Statue of Liberty and Central Park – but the city, much like Dominique Ansel’s iconic Cronut, is one of many layers.

In this concrete jungle, you can just as easily wander off the beaten track as you could stick to the traditional New York guidebook sights. Whether you’re a fan of pop culture sights, a theatre buff or a self-confessed shopaholic, New York has five boroughs to explore and around 13,000 yellow cabs to whisk you between them.

Put on your walking shoes and wander...

The kind of New York you experience is up to you. From high-end shopping to the hipster haunts of Brooklyn, the bright lights of Broadway and the endless opportunities on offer across the crowded isle of Manhattan, one trip is all it takes to get swept up in the excitement of New York.

The island of Manhattan arguably contains the most things to do in New York, starting with Times Square in the heart of the Theatre District, and nearby Midtown. Check out trendy Greenwich Village for quaint bars and atmospheric cafes before heading uptown to the famous Central Park.

Once you've ticked off the Top of the Rock, Empire State and Wall Street, consider broadening your scope towards the boroughs of Queens, Brooklyn or even The Bronx.

New York restaurants offer some of the world's finest dining as well as a smorgasbord of cheap eats. New York's street food is legendary, from hot dog stands to ubiquitous bagel shops. As one of the most cosmopolitan cities in the world, the Big Apple has also perfected a multicultural palate.

The Chinatown district in Manhattan is renowned for its authentic restaurants, as is its neighbour Little Italy – don't leave without trying a classic slice of New York pizza! New York is also famous for its bar scene, from the bohemian vibe of Greenwich Village to exclusive cocktail bars on the Upper East Side. Staying up late is a must in the city that never sleeps – see if you can uncover the city’s hidden speakeasy-style bars.

New York hotels can be expensive, particularly in Manhattan, but the views are worth every penny if you swing an upper-floor stay in Midtown. Each neighbourhood in Manhattan offers something different, so spend some time deciding which is right for you.

Will you choose the grungy vibes of the Lower East Side, or the chic style of Chelsea? Travelling on tight purse strings? A stay across the East River in Long Island City is a great way to boost the shopping funds, as the neighbourhood is conveniently connected to Manhattan by the Queensboro Bridge. Hotels in Brooklyn are slightly harder to come by, though you can still rub shoulders (and compare cardigans) with trendy hipsters and upcoming avant-garde artists in vibrant Williamsburg.

Enjoy some outdoor time in...

As a global centre of fashion and commerce, it's no surprise New York shopping is some of the best on offer anywhere in the world. Ritzy Madison Avenue on the Upper East Side is famous for its high-end boutiques, and a great place to simply people-watch if you can't bear to look at the price tags. Just as exclusive is Fifth Avenue in Midtown, with its wide range of exclusive designer emporiums.

The city is also famous for the sprawling Bloomingdale's and Macy's department stores that, between them, sell just about everything imaginable. Savvy shoppers will seek out the designer sample sales, while only the brave will attempt the notorious(ly rewarding) Black Friday sales the day after Thanksgiving.

With locals as famous as its dazzling cityscape, you should consider some quintessential walking tours once you've booked your New York flights. There are dozens of different guided or independent tours available, many of which are run by locals with intimate knowledge of the city's diverse neighbourhoods.

Specialist tours include visits to some of New York's best known rock music and jazz clubs, guided tours of the city's famous eateries, and tours highlighting famous landmarks showcased in television shows such as Sex And The City and Seinfeld. To truly channel your inner New Yorker, rub shoulders with the locals at a sports game.

Get behind the local sporting legends...

Did you know...? Horse racing writer John J. Fitz Gerald first used the term 'the Big Apple' in a 1921 article for the New York Morning Telegraph. He had heard the term around the stables of New Orleans from jockeys who wanted to race on the big New York City tracks.

Shop til you Drop in: New York City »

Planning on a shopping trip to New York?  This global centre of fashion influences trends from around the world so there is no surprise that New York's shopping is some of the best on offer! more >
New York City New York holidays NYC Shopping in New York Things to do New York Visiting New York
See more travel experiences from our Blog » 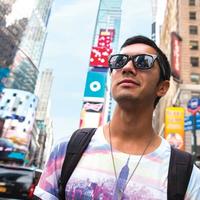